Since the rain was picking up in intensity and showed no signs of stopping, I made the executive decision that I wouldn't be taking pictures during the race. It made me sad, since Disney races are beacons for photos. But, it wasn't worth the risk to destroy my phone. Tonight would just be a night to keep the scenery stored in my mind's eye.

Here are pictures from the starting line: 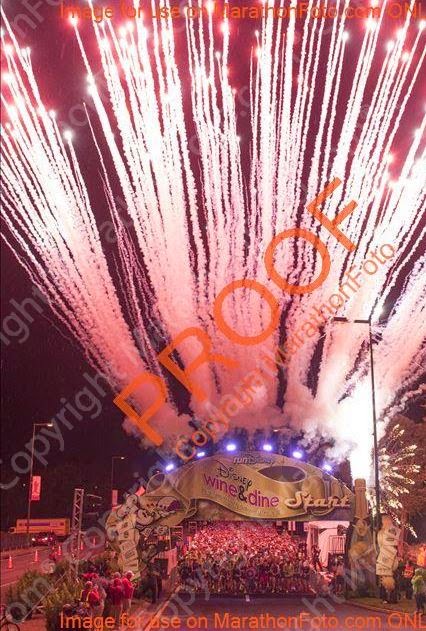 The corrals crossed the starting line quickly. I felt better once I got going. My rain-induced chill began to dissipate. I was thinking, "This isn't so bad. Look at all of us bad-ass runners! And maybe the rain will only last for a little bit?"

Many runners were still wearing trash bags or ponchos. Plenty of folks were wearing costumes. Some costumes looked like they would eventually become quite cumbersome in the rain (e.g. big, poofy tutus; long capes; mouse gloves).


Last year, I had reveled in all the amazing character photo opportunities, music, and other merriment all throughout the race. There were still some characters out taking photos in spots where there was protection from the elements. But unfortunately, the weather forced a lot of the characters and entertainment off the course. It was fairly quiet, except for the sound of the rain and some of the runners talking to each other.

I was trying to keep my phone protected (I had it wrapped up in a Ziploc bag). However, I had signed myself up to track my own splits and estimated finish time. I snuck a quick peek at my 5K split when it buzzed through. It said that my predicted finish time was 2:14:10. That would be close to my PR! For a brief moment, I considered trying to go for it. Then, I mentally slapped myself over the head and told myself not to be ridiculous. Nobody should try to PR at a Disney race, in my opinion. Especially not in driving rain conditions.

We entered Disney's Animal Kingdom. I enjoyed seeing the serenity of the park all lit up amidst the darkness. Long-distance visibility was poor and there were no animals to be seen, of course. The terrain was slippery and uneven so I slowed down to be careful.

I am not exactly sure where this picture was taken, but let's go ahead and imagine that it was at Animal Kingdom. Check out my photobombing doppelganger! 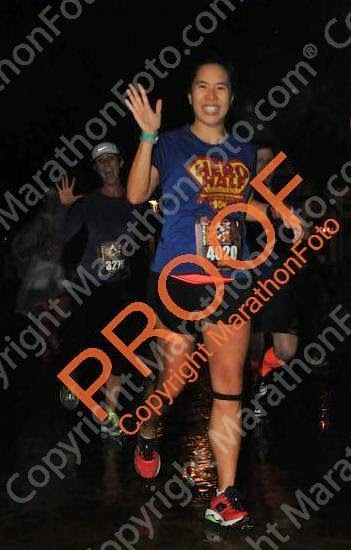 I started seeing various discarded costume pieces strewn along the roadside. (No Mickey gloves, though.)

I knew that the stretch between Animal Kingdom and Hollywood Studios would be the toughest of the night, mentally. There wasn't going to be much entertainment so this might take some gusto.

The rain was coming down progressively harder. Here's a picture of the runners pounding through:

I was wearing a pair of red Mizunos that I love and which had less than 50 miles on them. Going into the race, I had been babying those shoes, wanting to keep them "new." I was unhappy to be wearing them in the storms. They were holding up really well, though. Rain-induced blisters had been a big concern, so I was thankful to have no issue.

My thoughts: "Push on, push on, push on through the rain. Clif Shots will be handed out around Mile 8.4! Focus on getting to that next point!"

Speaking of which, I absolutely need to acknowledge the race volunteers. HUGE kudos to all of them for bolstering on through those weather conditions. After my own experiences as a race volunteer (in good weather, at that), I know just how much hard work it is. I always thank the volunteers along the course - but this night, I was even more wholehearted than usual.


I was so happy to see the Clif Shot station! I took two, stuffed one into my race belt, and gulped down the other one. Excellent. It was just what I needed.

Last year, the one and only character photo I took was with Lilo and Stitch around Mile 9. I had really been wanting to take another photo with them! As I approached that same spot, I anxiously hoped that the rain didn't make them take cover. No such luck. I saw their photo backdrop (the surfboard and lifeguard chair were a dead giveaway) but it was empty. Sadness!

Time to enter Disney's Hollywood Studios, woo hoo! This park has what I consider to be the biggest highlights of the course. Between the Clif Shot boost and the new scenery, I perked up. I reveled in seeing the Tower of Terror, the Rock N Roller Coaster, Mickey's Sorcerer Hat, and so much else.

I believe this photo of me was taken along Sunset Boulevard: 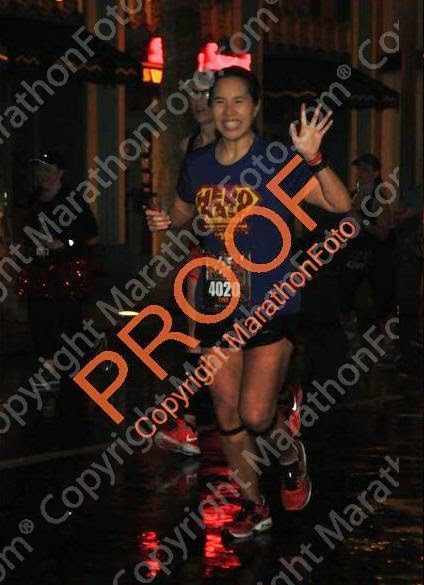 Then, came my very favorite part of the course - the Osbourne Family Spectacle of Dancing Lights! This picture so does NOT do the scenery justice.

After enjoying all the great sights in Hollywood Studios, we ran through Disney's Boardwalk. Last year, this had been an area completely packed with spectators roaring with cheers. This year, the boardwalk was nearly empty. It made me a little sad to see the comparison. But I did my best to take advantage of the handful of spectators who were there. I read their signs and exchanged as many high-fives as I could.

Final stop before the finish line - Epcot. There were more spectators there, but still a drastically lower number than last year.

I took in the sights of the World Showcase around me. Simultaneously, I combed through the spectators, looking for Adam. When I passed him, I screamed a hello at the top of my lungs. He didn't see me approaching, so I think I startled him (and everyone around him).

Soon after entering Epcot, I began keeping my eye on Spaceship Earth (aka the giant golf ball). That was near the finish line! Here's a picture of me in that final stretch: 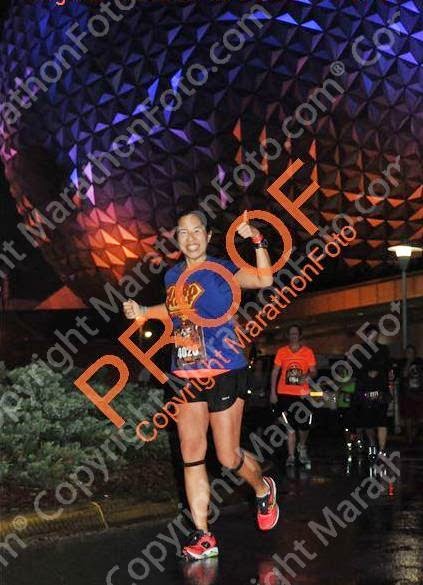 After crossing the finish line, I picked up my Wine and Dine medal and my Coast to Coast medal (yee-haw!). Then, I got a water-logged snack box, some beverages, and a space blanket (new this year and VERY much appreciated) before heading to pick up my gear bag.

The lines were surprisingly long. Last year, I didn't have to wait at all to claim my bag. Obviously the rain made everything more challenging this year. Perhaps things were shortstaffed due to weather-weary volunteers bailing? I bet many runners (myself included) abnormally rushed to finish, as well.

After working through some bag check issues, I headed back into Epcot for the post-race party. Again, the crowds and lines were very heavy compared to last year. Eventually I met back up with Adam.

It never felt so good to change into dry clothing. Adam also gave me the most considerate gift I could have ever asked for - a poncho!


Adam and I did what we could to enjoy the post-race party in the still-lingering rainfall. We walked around a little bit and rode a couple of rides, enjoying the very short lines. Then we got into the long lines to catch a Disney bus back to our resort. I think we hit the sack around 3:30 AM.

Epilogue: When we woke up the next morning, the rain had stopped and the sun was out! It really is all about timing and luck when it comes to Mother Nature. Sigh.

Adam and I made the most of our last full day in Orlando. We had a blast visiting Hollywood Studios and the Magic Kingdom. Here's a fun photo from lunch at the Sci Fi Theater: 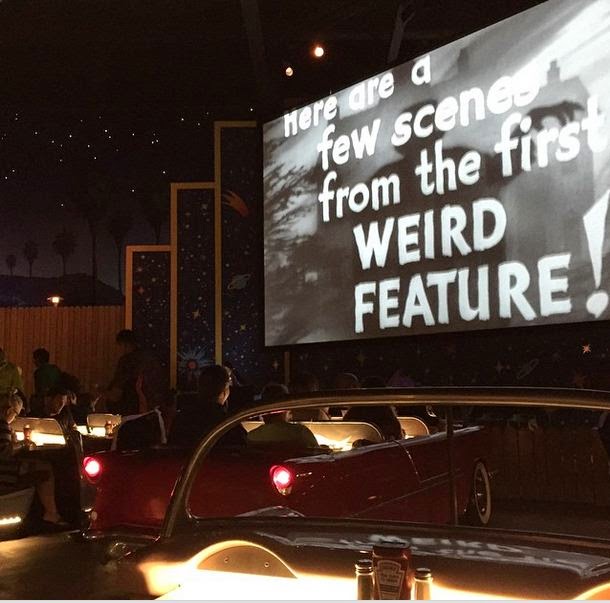 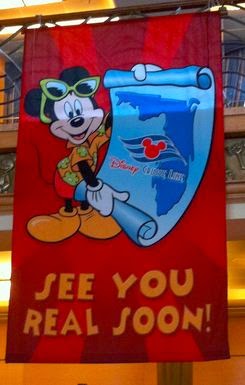