Last year, the Rock N Roll DC Half Marathon was marred by torrential rainstorms. It put an enormous damper on the whole experience (literally and figuratively). I was hopeful for a much better outing this year. After all, conditions couldn't be much worse than last year, right?

I rode a meteorological roller coaster during the ten days leading up to race day. Thankfully, race-day weather conditions ended up being just about perfect - temps in the upper 40s and overcast.

On race morning, I was up at the crack of dawn to catch a Metro bus and train to the starting area. Check out this beautiful sunrise outside of Vanitha and Asheesh's apartment: 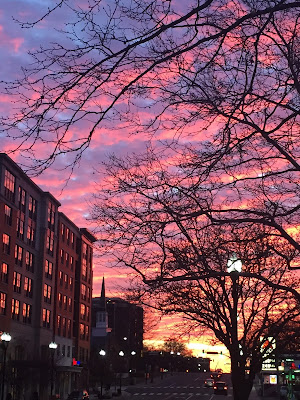 There were other runners waiting at the bus stop with me. I had an enjoyable chat with one other woman who was also running the half. Other runners around me were all talking like age-old friends upon first sight. It's so true that all runners are friends we just haven't met yet. Love it!

I arrived at the Federal Triangle Metro stop and started making my way over to the start village. Here's a telling view of the Washington Monument on Rock N Roll race morning: 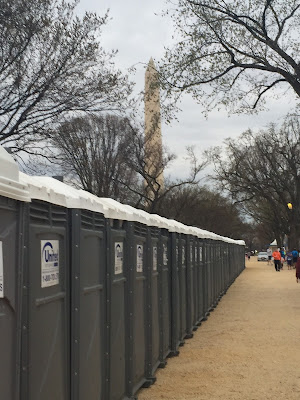 The portapotty lines were enormous and slow. I waited for about 20-25 cold minutes.

Afterwards, I made my way to the start line. The corrals weren't being enforced, so I elected to jump into a slightly earlier corral and get moving.
About 20 seconds after crossing, one of the pace leaders yelled out, "Great job, guys! We've got less than a marathon to go!" This made several folks chuckle. It's all about perspective, yes?

I reveled in the stunning memorials and landmarks we were passing along the course.
I didn't have time goals for this race, but I was running a decent pace. I hit the 5K mark in 31:20, which was a 10:06 pace. Part of me debated trying to push it. Then I reminded myself of the giant hill mid-course, plus all the photos I would want to take along the course. Cue the lyrics from that Eagles song: "Take it easy, take it easy, don't let the sound of your own wheels drive you crazy..."
The next part of the course took us into Rock Creek Parkway. This was one of my favorite parts of the course for its lush greenery along a riverfront.
I was mentally bracing myself for Calvert Hill, which I knew was coming around Mile 6 or 7. At the same time, I was also curious to see if all my hillwork would make a noticeable difference.

The Wear Blue to Remember organization puts up pictures of fallen soldiers stations folks prior to and along Calvert Hill. Folks stand holding American flags on both sides of the course. It was an emotional experience and made me think of Amy and her connections to the group. Several runners were touching every picture along the way. I tried to high-five as many of the flag-holders as I could.
I successfully ran up about 80% of the hill before giving in and dropping down to a walk. I could have run more of it, but didn't want to trash my legs too much at that point. Last year I think I ran only about half of the hill with a lot of effort - so this year felt like a win!

The course next wound through Adams Morgan. The spectators were fantastic. There were so many people in costume, holding up funny signs, playing music, offering us everything from grilled meat to doughnut holes to champagne shots. (Seriously, they had a pile of empty champagne bottles sitting on the ground nearby - I wish I had taken a picture!) I saw a man and his toddler daughter both handing out plastic cups filled with margaritas. This made me chuckle.

Here are a few spectator pictures: 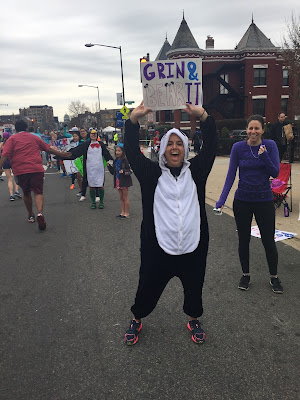 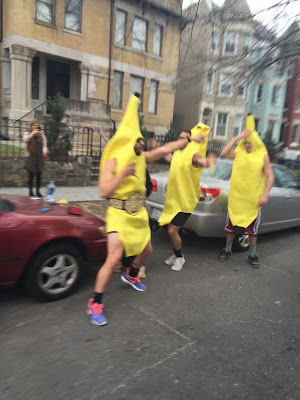 Vanitha and her Batala drumming group were stationed at Mile 8. As I approached, I could hear the drums in the distance gradually getting louder and louder, which gave me energy. Vanitha's group was stationed at the bottom of a hill so I had an excellent view of them as I was approaching. What a boost it was to see her!!! I saw a number of military folks running in and/or with their gear. Here is a snapshot of one: 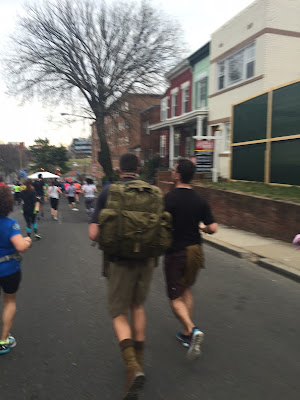 Around the 9-mile mark, volunteers handed out Glukos drink packets and gummies. I know you're not supposed to try anything new on race day, but I didn't feel like going through the effort of digging a GU out of my runner's belt. Living dangerously, I went ahead and opened up a Glukos packet. Unfortunately, my hands were slippery so I had trouble opening it. Then I struggled mightily to get the contents out. ARGH.

The next part of the course included a view of the U.S. Capitol (undergoing renovations, unfortunately). I had completely missed seeing the Capitol building during last year's race, so this was awesome. What a privilege to be running in the shadows of such an important landmark!
I hit the 10-mile mark in 1:44:03. Fatigue, both mental and physical, started hitting around Mile 10.5.

At that point, the course was running through neighborhoods with rolling hills. My quads and hamstrings were livid. I didn't remember those hills from the prior year. Maybe the rain made everything so rough last year that all I could remember was being miserable, period?
During those last few miles, my mind was pretty blank other than noticing almost everyone was turning off at the half marathon split. I always think about how brutal that must be for the full marathon runners. Yikes!

The final stretch of the course was uphill. I gritted my teeth and tried to look only at the finish line banner. I didn't even try to kick it at the end.

My official time was 2:16:26. Yay for beautiful race medals! 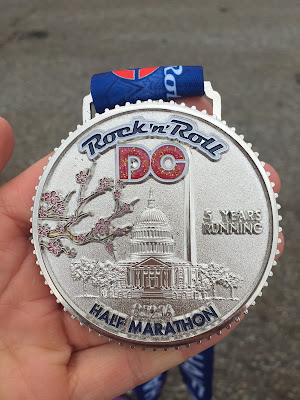 My results were an improvement from last year, especially since I ran straight through in 2015 without taking pictures. However, I was pretty wiped out considering I hadn't run anywhere near goal pace. Those hills ended up taking a much bigger toll on me than expected, too. Looks like I still have a lot of work to do in preparation for the Pittsburgh Half Marathon. But we'll take it one day at a time, yes?

New this year, the Rock N Roll DC organizers made a changing tent available post-race. YES! Last year I also had to wait a good hour in the rain before I could get onto a Metro train. This year I was on a Metro train in 5 minutes. Even more gratitude!

I met back up with Vanitha. We had a tasty post-race meal at a cute local restaurant called Teaism. 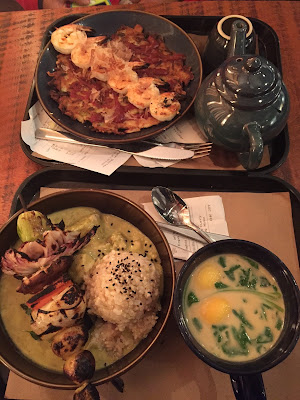 In summary, my experience at Rock N Roll DC was infinitely better this year than last year! Thanks, Mother Nature!

All in all, the weekend was a really fun time. Shout out to my long-time friend Imran, who we got to catch up with later that night with tons of laughs and stories. It was also awesome to spend time with Sarah, Dina, and Jamie. Last but not least, my huge thanks go out to Vanitha and Asheesh for being such wonderful friends and hosts.

Life is good - and it's even better when you have great friends to share it with. =)