I lived in Chicago's near south side for nine years.  I did enjoy my time there, but one of the drawbacks of that area was that I still had to get into my car and drive to most places.  I had missed out the city-life joy of being able to walk to shop and restaurants (although, I did have fabulous access to the lakefront path and also to a running track across the street from my building). 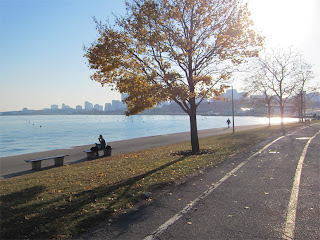 Lakefront Path - South Shore
Fast forward to the present.  I've lived in Chicago's West Loop neighborhood for about a year and a half now, and have thoroughly enjoyed it. I love the location (so close to downtown that I can walk to work!), love having Greektown, UIC, and the Randolph Street food markets and restaurants right there, love the residential feel of the area, and love that visitors can actually find unmetered and unzoned street parking relatively easily on any given normal day!  I read someplace that the West Loop is Chicago's version of New York's SoHo neighborhood, which I think is a wonderful comparison.  I actually feel somewhat hip by living here - and this is coming from someone who prefers NOT to follow the crowds living in the uber-trendy neighborhoods.  Call it a case of individualism and wanting to be a little unique in my own way (that, and I conduct training workshops on personal branding so I probably pay more attention than most do to these things).

Another incredible benefit of living in the West Loop is the proximity to the United Center, aka the UC, aka the Madhouse on Madison.  I am, as Adam puts it, a rabid Blackhawks fan, and there is nothing that I like better than to go see a Blackhawks game live at the UC.  At 1.25 miles away from home, it's an easy walk to get there.  Parking at the UC is expensive - a minimum of $17 per vehicle.  Certainly, public transit helps. But being able to walk there for free just can't be beat, and having the flexibility of being able to pick up last-minute tickets at last-minute prices to go to a game at the last minute has been amazing.

One of the best things about running is being able to explore neighborhoods while doing it.  I have a 5K course loop that I frequently run in my neighborhood based on an old 5K race that used to be held here (the Wacky 5K). However, thanks to the powers of the Garmin, I've been able to get out there and just run wherever the path (or the traffic patterns) may lead me.  Sometimes the path and the traffic will lead me to run by the United Center. 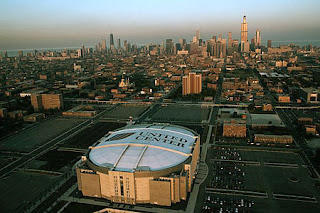 ﻿Gorgeous skyline
I've done this early in the morning or at times when the UC has no events going on, and I enjoy the quietness surrounding the Bobby Hull/Stan Mikita statues and the Michael Jordan statue. (Back in the Jordan era, I was a diehard Bulls fan - and to this day I still have the utmost in appreciation for MJ's skill and drive and talent.)  I enjoy seeing the UC sign out front with the rolling lights, announcing that this is the home of the Blackhawks and the Bulls. I enjoy seeing the Hawks and Bulls logos emblazened near the gates.  I enjoy seeing the wide-open spaces from the empty parking lots, and I envision the inside of the Madhouse and all of the great history that has taken place inside. 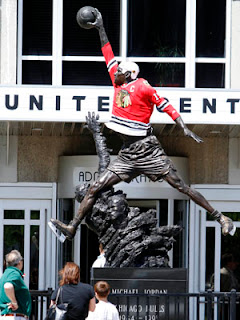 MJ is a Hawks fan, too
Other times I've run past the United Center on Hawks game nights.  It's a completely different scene.  The streets and parking lots are packed to the gills with cars displaying Hawks banners and Hawks license-plate frames.  Fans clad in red Hawks jerseys are spilling out into the streets from the Madison Street bars and crowding the sidewalks.  It's a spectacle just to check out which Hawks player's jersey everyone is wearing, because the jersey you choose evokes an image of you as a person and as a fan.  There are dozens of people wearing the #19 Toews jerseys or the #88 Kane jerseys - but for me there is a great appreciation for those who stray the path to wear, say, the #4 Hjalmarsson jersey or the #32 Versteeg jersey.

Thanks to Adam, I have a #31 Niemi jersey in honor of my favorite goalie of all time, who inspired me with his hard work, great attitude, and refusal to back down from the many obstacles and challenges that he faced along the way.  I also like his unorthodox goalie style of making tush saves and "beating up the puck." 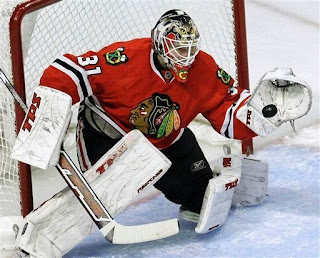 The Finnish Fortress
I draw strength from the Blackhawks.  Watching the Hawks battle on the ice each night emboldens me.  I continue to be amazed at how the team refuses to give up under even the toughest circumstances - and how frequently they overcome the impossible and find a way to win. The Hawks embody everything that I admire in top athletes - perseverence, fortitude, humility, love for the game, and a true appreciation for those that brought them there and support them.

Then there are those moments when I need a little humor.  At those times I pump up my MP3 player and listen to Chelsea Dagger, the Kaner Shuffle, the Wee Knee commentary.  Here is my most recent addition to the Hawks humor collection:


Frolik Navidad, everyone!
These are the things that inspire me to keep going.  This is why I frequently run past the United Center whenever I need a little boost.  Seeing the United Center and all that it represents reminds me of what is truly important in my training, and that no matter how hard it gets that another gear does exist for the truest of champions, but at the same time I shouldn't take myself too seriously and just have fun.

I am thrilled that the Chicago Marathon course passes the United Center around mile 14.  I know that seeing the UC will uplift me and I can't wait to crank up Chelsea Dagger and chuckle to myself while I am running past.  It'll be something for me to look forward to in the midst of all the craziness.