Bypassing the frigidity, and travel runs

My best friend Vanitha is getting married this weekend in San Juan, Puerto Rico!  I am so, so excited to help her celebrate!  I am obviously also super excited about a trip to the Caribbean, especially when Chicago is supposed to get hit tomorrow with its first major snowfall of the season.  I plan to take full advantage of being in Puerto Rico from a running perspective, as well - I'll be packing my running gear and have already researched running routes.

Chicago has actually had a very mild winter thus far (temps in the 50s yesterday and today!).  My plan was to maintain my training all throughout the winter to really solidify my running base before official marathon training begins in a few months.  I consider there to be about a 12-week period in which the elements could potentially be very harsh, which would be December through February.  I really dislike treadmills, so this means trying to still run outdoors and fight the elements at least once or maybe twice a week if possible.  However, 20 degrees Fahrenheit is the general line between when I'll fight the elements versus when the treadmill becomes a consideration.  I know that is probably wimpy to many people.  Maybe if I got a full-face ski mask it might help me to be tougher?

However, thankfully the elements haven't been much of an issue yet this season.  We're already through a good chunk of this period unscathed, I'll be in Puerto Rico this weekend, and I also have an upcoming trip to Phoenix in February for the NAAAP Leadership Academy!  So all in all, not too many more weekends to worry about (knock on wood).  Fabulous!

On that note, is it unusual that one of the biggest things I'm looking forward to for these trips, as well as all of my other upcoming travel plans, is the opportunity to go for a run in these destinations?

As I mentioned in my previous post, I am all about keeping things diverse wherever possible, and traveling is a great way to do so.  I am on a mission to visit all 50 of the United States, and one of my hobbies is to collect stamps in my passport (I've gone to great lengths to do this even during short international layovers, much to the chagrin of my mom).

I am all about traveling off the beaten path whenever possible.  Running is such a great way to do so; it allows you to observe glimpses of local life that you might not see if you stayed on the well-touristed paths.  So I thought I would start tracking places where I've gone running outdoors (treadmills or indoor tracks don't count)!

My list is pretty short right now, but so far I know domestically I have gone running in Illinois, Indiana, Wisconsin, Ohio, Minnesota, Michigan, California, Utah, Hawaii, and Georgia.  Not surprisingly, running in Hawaii and California were among the best - I'll never forget the experience of running past lava rock fields and beaches in the Big Island, and of running down the Santa Monica pier and Muscle Beach in California. 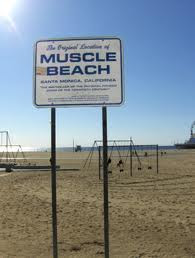 I feel like at some point I have run in Massachusetts, Arizona, Florida, Texas, and Virginia, although I can't recall specific times right now.  Sadly, I haven't run in Pennsylvania yet, despite all my trips to Pittsburgh to visit Adam's family, but that will change within the next year.  I actually can't recall any times when I've gone running while traveling internationally, too - I'll be changing that soon!

As much as I dislike the long Chicago winter, there is definitely something to be said about how it changes your perspectives and makes you truly appreciate nice weather when you do have it, whether at home or on the road.  My junior high science teacher used to say that if you wanted BORING weather, you should live in Florida or California... but if you wanted INTERESTING weather you should live in Chicago!  And we certainly do get quite a taste of the four seasons here.

In short, nobody will appreciate these warm-weather travels more than me.  And what better way to get motivated for a run than the chance to do some sightseeing along the way?  I am adding a new goal for myself to try to run in every new state or country that I travel to from this point on. 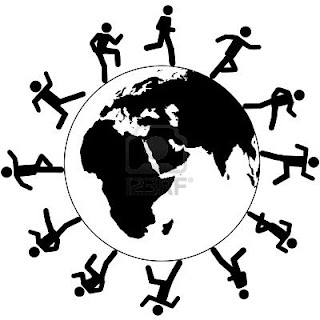