A glimpse of North Korea

When preparing to visit Helen in Seoul, I learned about the Korean Demilitarized Zone (the "DMZ"). This is a strip of land running across the Korean peninsula which serves as a buffer zone between North Korea and South Korea. It is about 160 miles long and 2.5 miles wide. It is also the most heavily militarized border in the world.
Surprisingly, there are a number of tours that visit the DMZ. I jumped at the opportunity, of course. Helen had already been on a DMZ tour, so I went by myself on a day that she had to work. I was required to bring my passport and adhere to a dress code (no shorts, sandals, etc.).

The DMZ is about an hour's driving distance north of Seoul. Enroute, our local tour guide gave us several precautions including taking photographs only in approved spots, being careful not to point or gesture at anything, and avoiding communication or contact with any North Korean or United Nations military (!!!).

Our first stop was Camp Bonifas. This is a military post located within the Joint Security Area (JSA) in Panmunjom. This is the only place where North Korean and South Korean forces stand face-to-face, and it is nicknamed "Truce Village." When we arrived, it was clear how heavily guarded the premises were. There were military personnel everywhere. We were not allowed to take pictures.

At this point, American military took over the tour. They did a very thorough check of all of our passports. Then, they gave us each one of these visitor badges:
We each had to sign one of these waivers (which was not at ALL terrifying): 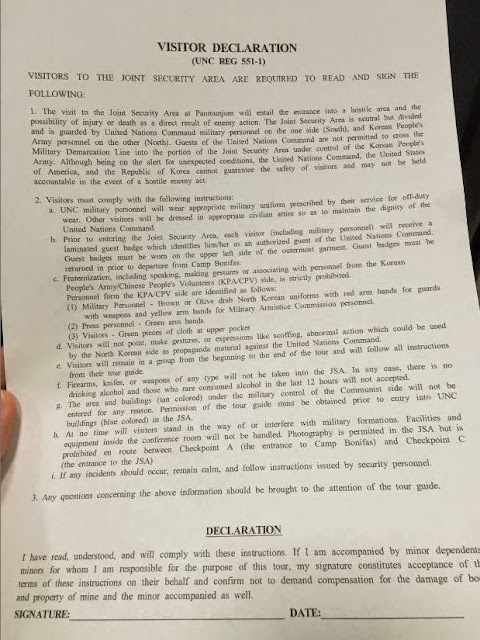 We were asked to attest that we were not intoxicated or under the influence of controlled substances; that we were not carrying any weapons; and that we were not planning to defect into North Korea. This drew some laughter from several folks - but I fully realized that this was no joke.

Another tour group arrived with a large group of media representatives wielding video cameras and microphones. Military personnel sternly apprehended them, saying that media visits required a special permit and escort. Again, this was obviously not a joke.

We watched a slide show explaining the history of the DMZ: 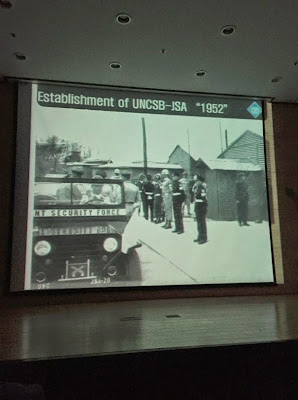 After the slide show, we were shown the Freedom House. It is intended for possible use to host reunions of families separated by the Korean War. (Note that "possible" is the operative word; my understanding is that no such reunions have ever occurred there.) No pictures allowed. 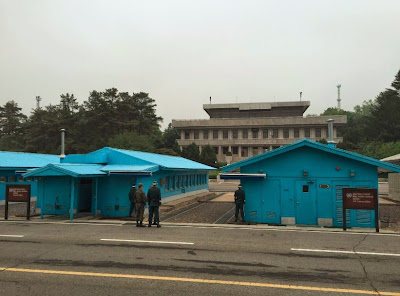 Our guide warned us that North Korean snipers were in the building carefully monitoring our every move. We were reminded again not to point or make any gestures, as this would risk endangering ourselves and everyone around us. This made me nervous about even pushing my hair out of my eyes or adjusting my glasses!

Here's a closer shot of some of the military guards on the South Korean side. The cement line in the middle of the picture is the official demarcation line. 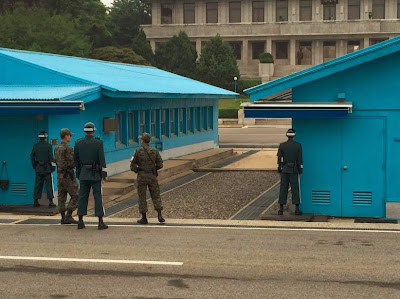 We were told that sometimes North Korean soldiers will guard right at the line, so the two sides could literally be standing facing each other. (Awkward?)

We then went inside one of the conference rooms where the negotiations take place. The blue flag on the conference table represents the demarkation line. The right of the flag is North Korean territory, and left of the flag is South Korean. Note the Republic of Korea soldier standing guard right along the flag, as well as the American soldier on the left. 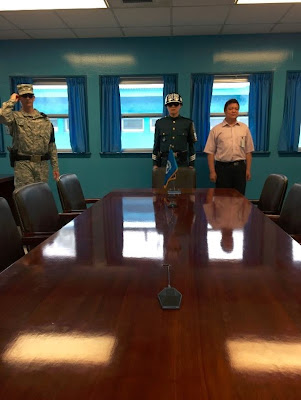 In case you were wondering, the guy in the white shirt was trying to take a picture with the Korean soldier.

Here are some closer views of the Korean soldier. Check out the armband. 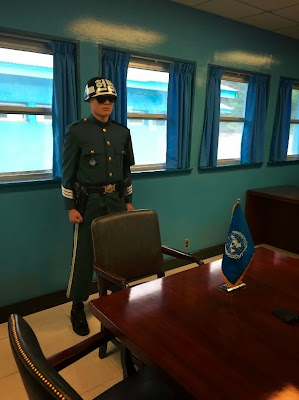 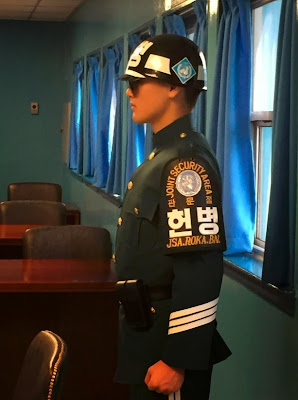 We were permitted and encouraged to step into the North Korean side of the room - so we all did. Given the controlled environment, it didn't feel dangerous to me.

We were heavily warned that we should NOT attempt to exit the conference room on the North Korean side. I believe the exact words used were, "Don't even think about it. Just don't." You got it, buddy.

At this point, the tour was turned back over to our local tour guide and we departed Camp Bonifas.

We then drove past the Dorasan Observatory, where North Korea's landscape is visible. On clear days, you are able to see mountains that are in North Korean territory. Unfortunately it was very overcast when I was there, so visibility was quite poor. But here is what I got: 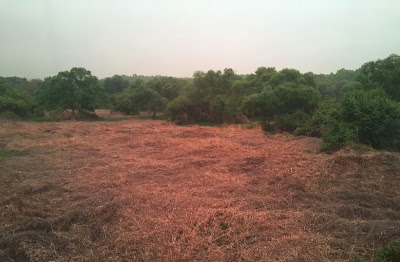 Next, we saw the Bridge of No Return. The bridge crosses the Military Demarcation Line and was used for prisoner exchanges at the end of the Korean War.
The bridge's name is based on claims that many war prisoners did not wish to return home. They were taken to the bridge and given the choice to remain in the country of their captivity, or cross over to the other country. However, if they chose to cross, they could never return. The bridge was last used in 1968.

Our last stop was Injimgak, which is a park built in Paju (South Korea's northernmost city). The park was built to console those who were impacted by the division of Korea. The area is filled with statues and monuments from the Korean War.

This is the Bridge of Freedom, which is a former railroad bridge for repatriated soldiers returning from North Korea: 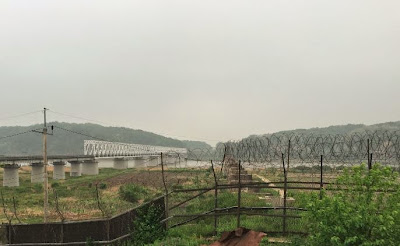 Throughout the park, various walls are filled with peace-wishing ribbons, flags, and other personal notes: 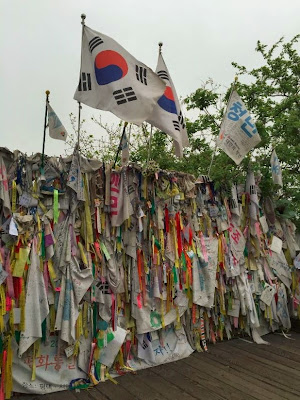 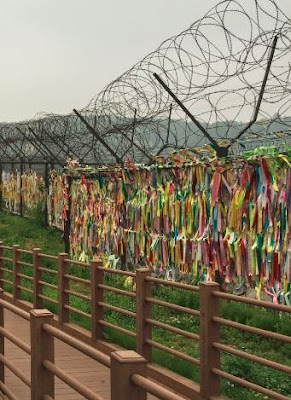 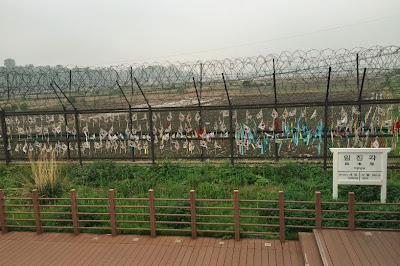 There is a lot more detail on the DMZ and JSA that I am not including here for sake of brevity. However, the more I reflect on the experience, the more I am realizing the magnitude of the area and all of its history.

I am usually not big on guided tours, but seeing the DMZ is most definitely NOT something that you can do on your own. In summary, I think the tour was well worth it. I am very thankful to have had the opportunity to go.

--
In case you missed it, check out some of my other pictures from Seoul here.
Posted by emmers712 at 6:17 AM