Meet me in St. Louis

I am so far behind on all the things I want to share! We'll start with a quick recap of last weekend.

Adam and I went to St. Louis and met up with our friend Lindsay to watch the Steelers vs Rams.

After a long drive through fields of corn and soybeans, Adam and I arrived in the Lou on Saturday early evening. My friend Steve had recommended Pappy's Smokehouse for barbeque, so for dinner we took him up on the suggestion.
Pappy's is exactly the type of no-frills, local joint that I love. I had been warned the wait would be long, and it was. We were in line for over an hour! I got the smoked turkey, which was amazing. I was so hungry that I didn't bother taking any pictures before scarfing it all down. (If I go to Pappy's again, I would probably call ahead and do a take-out order to save time.)

The next day, I was up and at 'em early in the morning to log a few miles before the football game. There is no better way to see the area than in your running shoes, yes?

When in St. Louis, thou shalt run to the Gateway Arch, of course. Prior to this weekend, I'd only seen the Arch from a distance. This time, it was cool to stand at its base and actually touch it. I thought it was much wider in person than it looks in pictures. 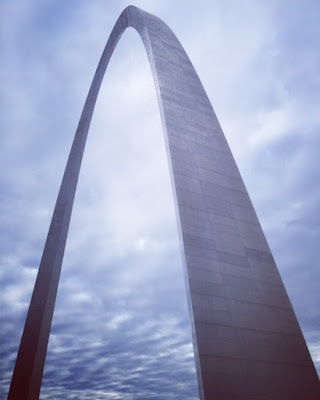 There were lots of runners around the Arch. It seems to be a popular resting spot due to some portapotties on the premises! =)

Next on my run agenda - Busch Stadium. This was another thing I'd only ever previously seen from a distance. The night before, the Cardinals were in town. Adam and I debated trying to go to their game, but ultimately decided not to. I still wanted to see the stadium, though.

I was hoping to get a picture of Busch Stadium's marquee entrance, or something similar. Unfortunately, the stadium's front entrance is right underneath some highway overpasses. It didn't make for a very good picture. Therefore, I settled on photographing some of the nearby fan party zones: 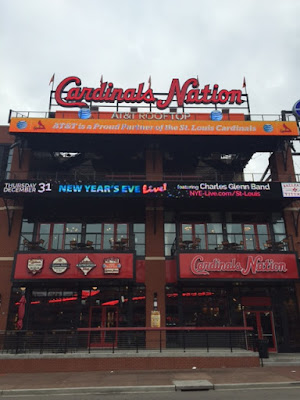 After I got back from my run, it was time to get ready for the football game!

Here I am with Adam and Lindsay in front of Edward Jones Dome. (Lindsay flew in from San Francisco the night before after attending an AC/DC concert!)

We weren't the only ones who traveled to the Gateway to the West for the game. The city was crawling with Steeler fans. I conservatively estimate the ratio of Steelers fans to Rams fans at the game was at least 2:1, if not 3:1.

Here are some of the visiting tailgaters in action (notice the Arch in the background!): 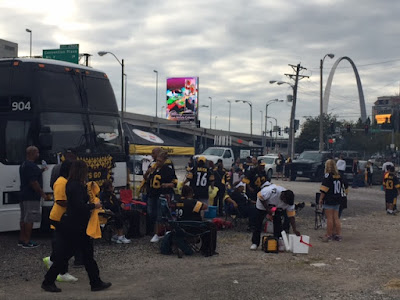 Game Time! Kick-off was unceremoniously delayed due to the turf catching on fire during the pregame show. Ooops. Here's an action shot of the dome staff remedying the damage under the not-so-watchful eye of the refs: 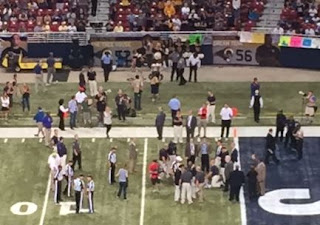 Here's the view from our seats. The Steelers were making a goal-line push during the first quarter: 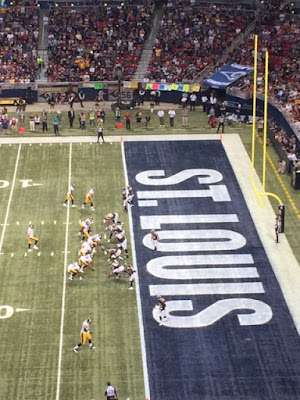 Steeler aficionados, we obviously saw Ben Roethlisberger take the hit that resulted in him being carted off the field in a stretcher. We were too far away to see the details, though. Here is hoping and praying he will make a quick recovery.

After the (stressful) Steelers win, we headed over to Baileys' Range for some burgers, fries, and shakes. Baileys' was a recommendation from both Maureen and Steve, and it was excellent. Loved the creative decor and the food.

Time to sojourn back to Chicago! Through the cornfields and soybean fields we went. It was a quick, but very fun weekend! It is always great to catch up with Lindsay, too.

In addition to Steve and Maureen, thanks go out to Deidre, Scott, Beryl, Tien, and Margaret for all your local recommendations. Noted for the next time to meet in St. Louis!!!
Posted by emmers712 at 5:02 PM