Last night, I ran the Super Bears Shuffle 5K. What a fun way to kick off the start of the NFL season! 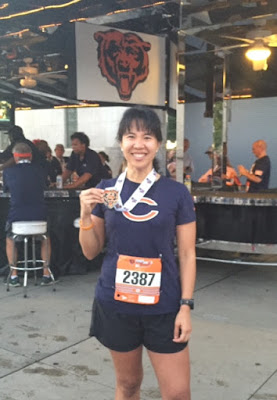 Leading up to the race, the weather was sketchy. We had some torrential rainfall earlier in the day. I spent the afternoon watching the radar screen like a hawk. I was relieved and happy that the skies cleared up by late afternoon. It ended up being a gorgeous night for a race - temps in the upper 60s/low 70s, a scattering of clouds, and a light breeze.

The atmosphere was super festive. I felt like I was at a giant tailgate party with a few thousand of my closest Bear fan friends! The sidewalks were filled with grills wafting delicious aromas; bars and beer vendors aplenty; music; and lots of fun football-themed activities.

Chicago Bears mascot, Staley, was hilariously zipping around the crowds on a scooter: 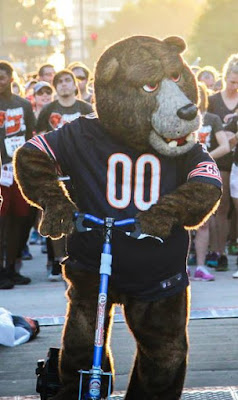 One of my favorite moments was watching the Chicago Bears Drumline in action. Here they are entertaining the crowd in front of Soldier Field: 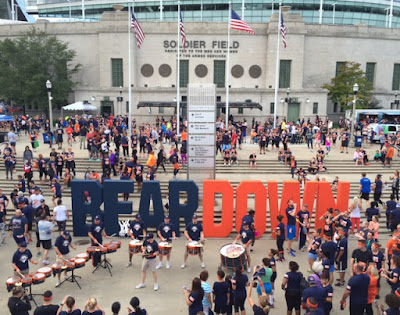 Wayne Messmer sang the national anthem before the start. It was a very special moment for me to hear him live. He is an incredible singer and very symbolic of Chicago sports. For those of you who are unfamiliar, here is one of his classic renditions: 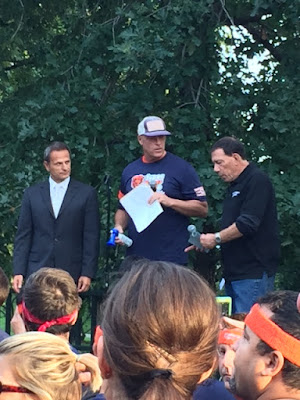 Video consoles were set up near the starting line. Before the race got underway, they showed video clips of Bears players wishing us a good race and telling us to represent Chicago proudly. 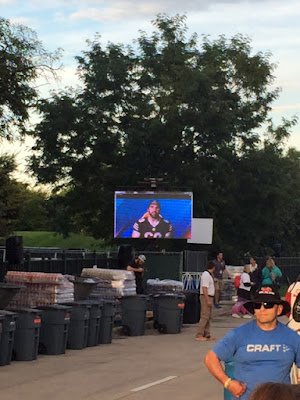 The start line was set up underneath a giant Bears inflatable. This was my view from the corrals as we were approaching: 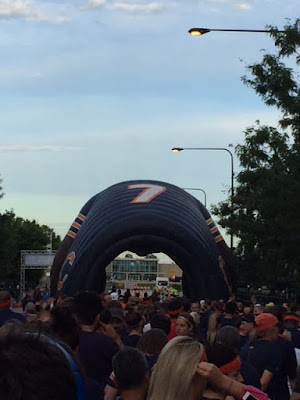 The race kicked off with fireworks and runners holding giant Bears flags. On the other side of the inflatable, here's what the start line looked like:
And we were off to rousing cheers and high-fives all around!

I had no intention of trying to "race" this race, but I got swept up with the energy of the crowd. I decided to test my legs a little to see how it felt.

Within the first few minutes, my Garmin was showing a pace of 7:58. I tried to slow down a little. Running through the McCormick Place tunnel helped ground me.

My hips were sore and I was already feeling the exertion. I am clearly NOT in any shape to challenge my 5K PR! (That would require an 8:20 pace or better.) OK, test completed. From there, I took the pace down. I began keeping my eye out for the "Combine" course offerings.

The second half of the race included beautiful views of the lakefront and the city skyline. Near the Mile 2 marker, tackle dummies and crash pads were set up: 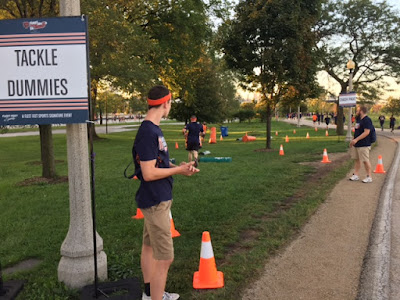 I veered off course to participate. I saw one guy get all into it, hurling himself face-first into the dummies. Comparatively, I just gave some light good-natured punches to a few dummies. =)

Around Mile 2.25, I saw a selfie photo station! You could pick from about 8 different player banners. I enlisted one of the race volunteers to take my photo: 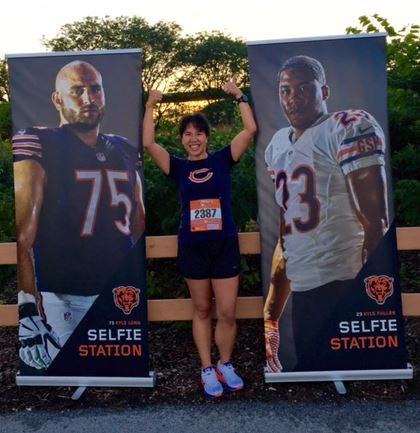 A few minutes later, Staley was out on the course giving high-fives and cheering on the runners. Here is my sad attempt at a selfie with him: 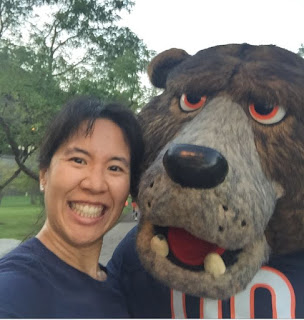 Near the Mile 3 marker were step-over pads:

Those pads are deceiving. They look like they are low to the ground, so I thought they'd be no big deal. I was literally jolted by how high I had to lift my knees to run through them!

After clearing the pads, I could hear the finish line emcee in the distance. I quickly got back on course and tried to pick up the pace.

A race emcee was calling out our names as we approached the finish line. I always enjoy this touch. It was great to hear the bit of recognition in that final stretch!

Check out the awesome finisher medal: 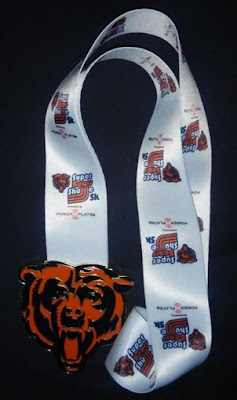 Post-race, I hung out for a little bit, enjoying the energetic crowds and the music. Then I met up with Maggie and her husband, Robert. Here's a picture of Maggie and me: 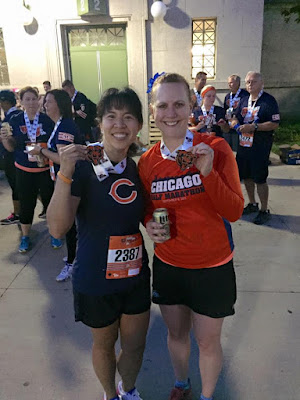 Robert was proudly wearing a Packers shirt. It made him easy to spot in the crowd, LOL. Maggie said he was talking smack on the course, too! Let the fun begin as we prepare for the Bears home opener vs. the Packers this Sunday!!! ;-)

The Super Bears Shuffle was a BLAST. I thoroughly enjoyed the festive, game-day party atmosphere; the awesome race swag; and the football-themed course offerings. I would highly recommend this race to all Chicago Bears fans!