Before I get started today, thank you to everyone for the wonderful comments and responses to my pregnancy news! I am humbled and grateful for all of your heartwarming support! 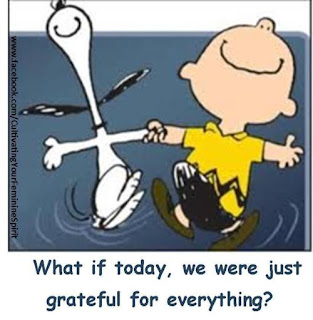 I had full intentions of getting back to at least a semi-regular blogging schedule, but that obviously hasn't happened yet. I have been slammed with work and various baby-related preparations, among other things. But I'll talk more about all of that another time.

Today, let's talk about some cool city explorations! Two weekends ago, my friend Helen was in town from Seoul, and came to visit. We had a great time scurrying around town amidst some unseasonably warm weather.

One of the weekend's adventures included attending a Museum Hack tour at the Art Institute of Chicago. The tour was an incredibly fun and unique experience and I have been wanting to talk about it ever since!

The Museum Hack website describes the tours as "...not your grandmother's museum tour" and "Museum tours... for people who don't like museums." Excellent descriptions. I would also describe the tour as an expertly thought-out blend of history/culture, interactive/improv games, and discovery.

The tour groups are limited to a maximum of nine people per tour guide. In my opinion, this is the perfect size. It's small enough to allow personal group interaction without being overwhelmed, but not so small that you feel like you are under a microscope. Here's a picture of our group as we were getting underway: 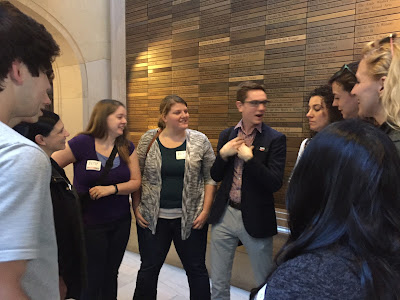 Our guide, Mark, is the gentleman just to the right of center wearing the dark jacket and glasses. Mark is an improv artist in Chicago (incidentally, he and I know several of the same folks who perform at ComedySportz and Second City!) His demeanor was perfect for the festivities - he was energetic, humorous, knowledgeable, engaging, understanding, and enthusiastic.

Mark began by describing how there were thousands of underground or background stories behind the museum's artwork displays. He had spent countless hours researching and learning these stories, and would be sharing a few of them with us.

For example, these pieces generated stories about the famous architect Frank Lloyd Wright: 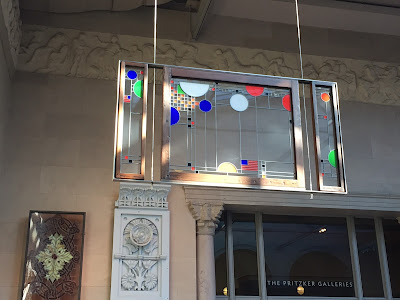 We learned about how Wright's home was destroyed by not one, but two fires, one resulting in the death of his mistress and two of her children.

As another example, we learned about how the images conveyed in this piece inspired actor Bill Murray to forgo a planned suicide attempt (!!!!!!): 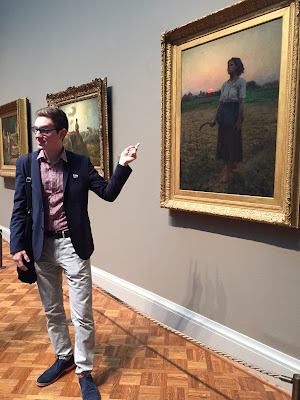 All of the stories were very interesting, of course. However, I was thinking the entire 2-hour tour would consist of us going from painting to painting just listening to different stories. Admittedly, I wasn't sure I had that long of an attention span. Being pregnant, I was also concerned about being able to keep up with all the walking, stair-climbing, and standing involved.

MARK TO THE RESCUE!!!

The tour went WAY beyond listening to stories. We started having fun group discussions and playing a variety of interactive and interpretive games. There were way too many to describe here, so I'll share just a few examples.

In one gallery, Mark had everyone pick out our favorite character depictions in a painting, then try to physically copy them as a group. The gallery was packed, but he told us not to worry because the crowds would eventually move aside and let us pose together. He was right! Here's our masterpiece: 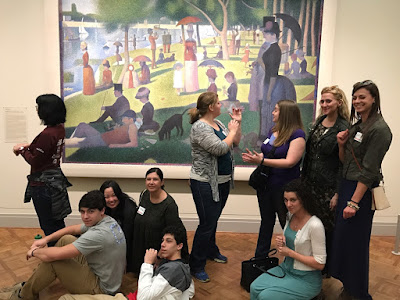 In a quieter display wing, we were asked to look at painting titles, then come up with a dance to illustrate a title of our choice. I chose a painting entitled "Head" (unfortunately I didn't get a photo of it). My illustration was a personal reprise of the SNL Roxbury Guys dancing to "What is Love." E.g.:
(Do you all remember those skits? I had forgotten how hysterically funny they were and still are!!!)

The rest of the group came up with similarly comical moves and we took turns demonstrating and duplicating each other using some quietly-played music from Mark's phone. (A security guard in charge of that wing saw us, of course, but didn't say anything. We noted she was clearly trying to hold back her laughter. =D )

We found a creepy statue and humorously theorized on all of its elements, what it represented, and what precipitated the artist to come up with the design. We also noted the statue bore an eerily similar likeness to Mark: 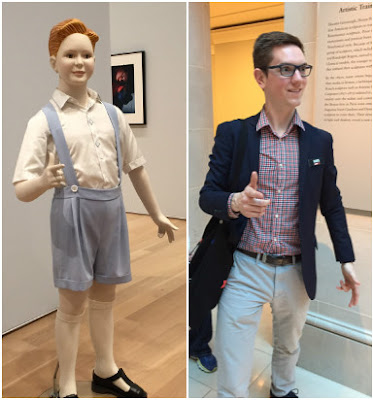 One last example - we went into a wing of statues which Mark entitled "the goddess wing." We were each asked to find the statue that most spoke to us, then pose with it. Here are the pictures that both Helen and I took with our respective choices: 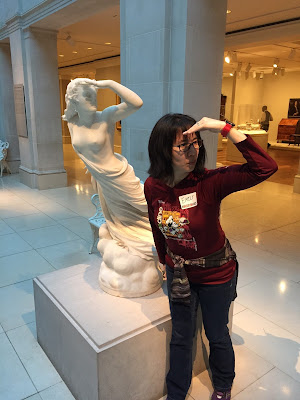 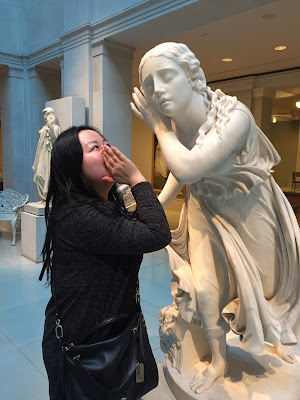 Again, there were so many other examples of fun activities we did using the museum's displays that I'm not sharing here for sake of brevity - but you get the idea on how interactive it was!

Mark told us, "This is YOUR museum. When you hack a museum, YOU control the experience you have inside and the fun you want to have. You make it out to be whatever you want it to be!" You got it, buddy. Truer words have never been spoken. =)

After our tour, Helen and I went back to a couple of the places we discovered as part of the tour group. For example, the group had visited the Ando gallery, which is a dark room with 16 columns as a traditional element of Japanese architecture. This gallery is intended to be a transitional space to help visitors relax: 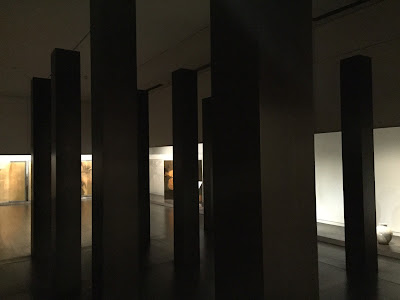 Mark mentioned many visitors bypass this gallery, but those that do find it tend to go back multiple times. True to his word, Helen and I both wanted to enjoy the quietness of this gallery in more detail the second time.

Of course, Helen and I couldn't resist popping into a few other exhibits, too, like the paperweights exhibit (who comes up with ideas for these types of exhibits!?!?!?) Here's a shot of us in front of one of the display cases: 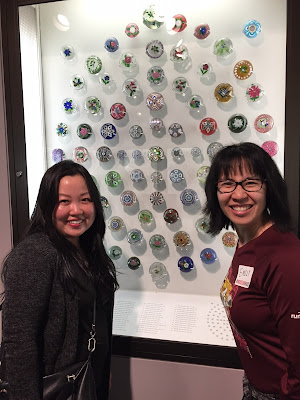 All in all, the Museum Hack tour was a blast! I wasn't sure what to expect going in, but I thoroughly enjoyed being able to visit and enjoy a museum in a whole new way. I've mentioned many times how much I love exploring the depths of my hometown Chicago, and this tour was exactly the type of local, get-under-the-surface, off-the-beaten-path experience that I am always looking for.

Many thanks to Museum Hack for such an awesome experience! Big cheers to learning that museums do NOT have to be boring or stuffy if you know what approach to take! I'll never visit a museum the same way ever again. =)
Posted by emmers712 at 1:22 PM