Maggie over at Mag Mile Runner is organizing a weekly Runner Photo Challenge for all of us bloggers.  This week's challenge:

If you've read more than 3.14159265 of my blog entries, you'll know that I am a rabid fan of the Chicago Blackhawks.  Any time the Hawks host any kind of event for their fans, I am the first in line.

When the Hawks teamed up with the Chicago Bulls and the Chicago White Sox last year for the inaugural Home Team Charity 10K race, I was pumped!  An event that combines my beloved Blackhawks with my passion for running?  It's like they read my mind!

My participating picture in this week's Runner Photo Challenge was a no-brainer for me: 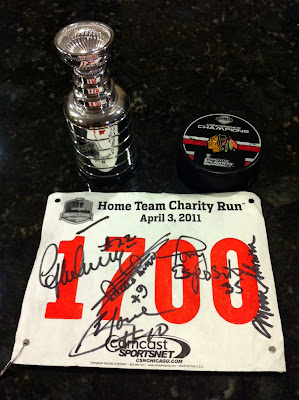 When I was in college and for a few years afterwards, I was an avid runner.  But then I took a several-year hiatus from running, with the exception of doing an annual 5K race that my firm sponsors every year.  Early last year I finally started lacing up my running shoes again.  The Home Team Charity 10K was the first race that I trained for after ending my running hiatus!  And what a great race for me to get myself back on track!

The race course started at the United Center (home of the Bulls and Blackhawks) and ended at US Cellular Field (home of the White Sox).  All participants had their choice of a race shirt representing one of the three teams.  Jim Cornelison, who sings the awesome national anthem at Blackhawks home games, was there to get the crowd going before the race start.  The mascots from each of the three teams were there to keep the crowd laughing (and I got a picture with South Paw, the White Sox mascot!)  Then the post-race party included opportunities for some folks to take photos with the Bulls and White Sox championship trophies (not the Stanley Cup, unfortunately), and to meet retired players from each of the three teams.

As you can see, I got autographs on my race bib from all of the players that I met.  The ones that stood out most to me, of course, were Blackhawks greats Tony Esposito and Grant Mulvey.  Both were so friendly and personable, and both genuinely seemed to enjoy chatting with all the fans.  (Adam thanked Tony Esposito for drafting legendary Penguins goalie Tom Barrasso - probably a very unexpected topic for Tony-O at a Chicago event!)

Beyond the thrill of meeting such incredible sports legends in person, it was so much fun to be surrounded by other Chicago sports fans/runners just like myself.  It was also awesome to see some of the race outfits (full-body Zentai suits, lots of jerseys, and even a man wearing a goalie mask).  The festivities and race details were so unique and were perfectly suited to my interests.  All in all, the Home Team Charity Run was truly the most fun I've ever had at a race, by far.

There's really only one way that I can sum it up: