Half marathon #6 completed yesterday!  A big thank you goes out to Nina for my free entry into this race!

Out of the four half-marathons I've done this year, this is the only one that had good weather (sunny and temps in the 60s).  Therefore, I had set semi-high goals for myself going into this race.  My first goal was to break 2:25, and my second goal was to break 2:20.  However, I was coming off of some trepidation following my awful 18-miler last weekend, as well as another 5-mile training run done last week in the same god-awful horrible heat and humidity.  But more on that another time.

The day started with a 5:20 AM wakeup call.  Kim, Erin, and Maggie came over around 5:45, and we got into my car and headed out.  There was more traffic and less parking than anticipated at that hour, so we cut it a little closer than I thought we would with our arrival.  But, since Maggie is the orchestrator of all of our Chicago Running Blogger meetups, I finally made it to a pre-race picture!


The race site was madness - runners, portapotties, and traffic everywhere.  Not to mention that the race site was enormous, so it took us some time to get ourselves situated.  We were in line at the portapotties when they blew the starting airhorn.


Similarly, the first several miles of the race and the first few aid stations were jampacked, too.  I had forgotten that this race draws over 18,000 participants and it sure felt like it.  Wow!

Kim and I ran the entire race together.  She's a very strong runner and she's doing a 50K next weekend(!), so she wanted to take this race easier.  Nevertheless, I knew she would push me in a good way - and push she did!  We did the first few miles at a pace that was a bit faster than I thought I could maintain for the entire half-marathon, but then I started slowing down a little into a more comfortable pace.  It was nice to have Kim there to chat with, and the time went by much more quickly than at my previous half marathons.

The course is almost entirely an out-and-back on Lake Shore Drive.  They actually close a southern chunk of the Drive for the race, which was cool.  My commute to work takes me on the very same stretch of the Drive that we were running on.  But, it felt completely different to be traveling on it by foot with hordes of other runners surrounding us.
﻿


I had told Kim that I wanted to do a 9:1 run/walk ratio, but I was so focused on staying on pace with her that we ended up overshooting the run ratio several times.  There were lots of aid stations and I walked through all but maybe two or three of them to get water/Gatorade.  I had taken a pre-race GU, and also took a GU at mile 5 and again at about mile 10.5.  I had also brought some salt capsules with me and planned to take about one each hour.  But I completely forgot about the salt capsules until close to the end of the race.  Oops.

By mile 9, we were cruising along but I realized that a sub 2:20 was not in the books for the day.  I knew I'd still be able to finish at or below 2:25, though.  In my previous half marathons, I had always been feeling tired by mile 10 or mile 11.  But this time, I felt solid - by FAR the best I've ever felt at that point in a half marathon.  It was a great feeling.

We began speeding up around mile 10 and passing other runners left and right.  Kim kept pushing me to show her what I had, to which I kept gasping, "I will do my best!!!!!"  There were signs up in the final mile denoting three quarters of a mile to go, half a mile to go, a quarter mile to go, etc.  After passing the half-mile to go marker, it felt like eternity passed with no sign of the quarter mile indicator.  I finally screamed to no one in particular, "WHERE IS THE QUARTER MILE MARKER?!?!?!?"  (When we finally did see it, Kim shouted to me, "There it is!")

Around the 13-mile marker, Kim yelled to me that this was it, so I took off and gunned it as hard as I could.  I only lasted for about 15 seconds before I realized I couldn't keep up that pace, so sadly I started slowing down a bit but still pushed as hard as I could.  I saw Adam close to the finish line, waving his Terrible Towel, and then I crossed the finish line.  Woo hoo!

My official finishing time was 2:22:52, more than 6 minutes faster than my last half marathon (the Rock N Roll Chicago Half Marathon).  Admittedly, considering just how much better the weather conditions were this time compared to my other half marathons this year, I had been hoping for an even larger improvement.  But still, nothing to sneeze at.  Many thanks to Kim for running with me and pushing me as much as she did!

I also later learned that Adam had undergone yet another set of unseemly adventures trying to navigate his way down to the race amidst all the street closures and traffic. Huge thanks to him, as always.  He continues to timelessly support me in my crazy endeavors while having to undergo some very stressful situations.

After the race, Erin was so kind to host a fabulous post-race brunch at her place.  It was a blast!  Erin put out quite the spread of food, too. 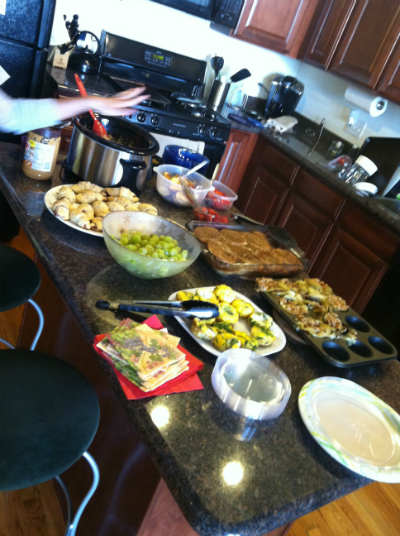 Here's a picture of us brunch-goers on Erin's rooftop:


Really fun times and a great way to close out my week off from work!

I do have a lot of lessons learned from this race that will pertain to the Chicago Marathon (e.g. another chapter in the great shoe audition, sigh).  More to come on all that later this week.
Posted by emmers712 at 1:37 PM