Should the New York Marathon be cancelled this year?

My prayers go out to everyone that has been impacted by Hurricane Sandy.  The pictures and stories of the devastation break my heart. 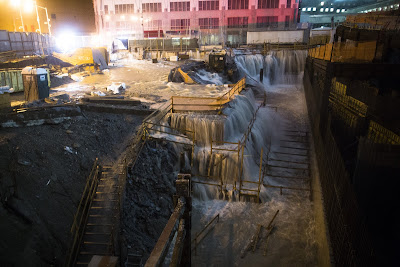 From a runner's perspective, I cannot believe that the New York Marathon is still going to take place this weekend.  LaGuardia, JFK, and Newark all have backlogs of thousands of cancelled flights.  The New York subway is barely operational in some places, and still out of commission in Manhattan and many other areas.  Traffic at bridges is backed up for miles, people are waiting in line for hours at gas stations. Thousands upon thousands are still without power, and countless others are now homeless.

Is it really a good idea for the New York Marathon to still go on this weekend?  The logistics of a marathon the size of New York City will strain local resources even when intact.  But how are nearly 50,000 runners possibly going to make their way just to the starting line on Staten Island under these circumstances?

More importantly, the marathon will require emergency resources that would be much more urgently needed in other places. I think it is more important to ensure that the locals of New York are taken care of before utilizing valuable resources to put on this event.

From the flip side, I understand the New York mentality that "We will prevail" and "We are resilient and we will go on, no matter what."  I also understand the magnitude of planning and cost that goes into the New York Marathon - not just from the organizer's perspective, but also from the runners.  The New York Marathon probably has a seven-figure price tag for its organizers.  Also, people travel from around the globe to run New York, many spending thousands of dollars in plane tickets and lodging.  I can't even begin to think about how many man-hours of planning that it took.

Then there's the countless hours of training.  I spent over nine months training for the Chicago Marathon - and if it ended up being cancelled, I would have been overwhelmingly disappointed.  Let's not even talk about New York's lotto system for registration.

In summary - while there are certainly two sides to this issue - I personally do not think that the New York Marathon should take place this weekend.  Put more bluntly, there are much, much bigger concerns right now.