Another week of participating in Rachel's Demotivational Monday linkup!

I'm going to take things in a more serious direction this time. Here is my submission for the week: 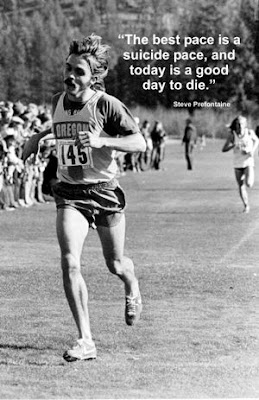 I was led to this picture by signing up for the Carrera de los Muertos ("Race of the Dead") 5K, which takes place on November 2. The race is done to celebrate Dia de los Muertos ("Day of the Dead"), which is a Mexican holiday observed to remember friends and family that have died. However, despite what the name would imply, the holiday is more of a celebration of life.

This picture was posted on the Carrera de los Muertos Facebook page. In similar context to the holiday, it had the accompanying description that, "This quote is more about 'life' rather than 'death.' Do your thing."

Very appropriate for a race of the dead that celebrates life!

Specific races aside, it's always great to accomplish your goals, of course. But that race pace that Steve Prefontaine so eloquently and colorfully refers to is definitely not for the faint of heart (both literally and figuratively). Ahh, the joys of trying to push yourself to the max while teetering on lurching across the sidelines to throw up...

(NOTE: I have never pushed myself while running to the point where I've needed to lurch across the sidelines. Here is hoping that it never even becomes a consideration...!)
Posted by emmers712 at 8:05 PM