As I've said many times, I am about as rabid of a Blackhawks fan as you'll ever find out there. Even so, it was still startling to me when Blackhawks Training Camp Festival and the Mad Dash to Madison 5K rolled around yesterday evening. 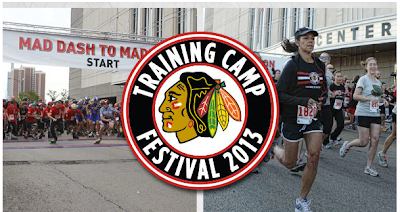 Where has the summer gone? It was only about 10 weeks ago that the Hawks had their championship parade down Michigan Avenue with the Stanley Cup! Is it really time for hockey already!?!?

This was my first experience running the Mad Dash to Madison. I had signed up for last year's Mad Dash, but last year the race got cancelled due to the NHL lockout. Also, Blackhawks Training Camp Festival usually takes place on a Saturday morning. However, this year there were arena conflicts at the United Center with the Disney on Ice show. Therefore, this year's festival took place last night, on a Monday evening.

Given the weekday timing, things got a little hectic for me leading up to the race. I left the office a little later than I wanted to. As a result, I ended up having to rush home where I literally threw on running clothes, slopped a gear bag together, and smashed a protein bar into my mouth. Then I scurried over to meet Erin for a warm-up run to the United Center.

To paraphrase the famous Blues Brothers quote: It was one mile to the United Center, I was carrying my gear bag awkwardly in one hand, was wearing capris that kept riding down on me, the sun was super bright, and I wasn't wearing sunglasses. Hit it.


Once we go to the United Center, the lines to enter the building were already stretched all the way down the block and around in every direction.


We met up with my friend Gina who I hadn't seen in probably 10 years! Gina was so kind to act as our personal gear check. She also got seats for Erin and me for the team scrimmage inside the United Center while the 5K was taking place. Unfortunately, I didn't get any pictures with Gina or with Erin. #BloggerFail

Prior to the 5K race and the team scrimmage, the team hosted a viewing of the Stanley Cup at center ice. Here's a picture that someone tweeted from the viewing: 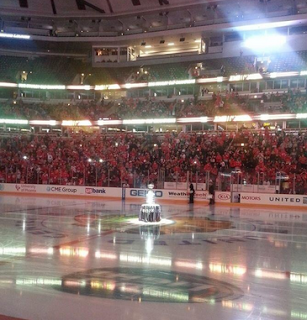 Back outside, Erin and I discussed race strategy. She wanted to race the 5K but I was undecided on whether or not to race it. Therefore, we agreed on a post-race meet-up point and went to line up at our respective pace areas. We were surrounded by a sea of red shirts and it very crowded trying to line up. I managed to squeeze my way in between the 8- and 9-minute pace signs.

When the starting airhorn blew, it was quite chaotic for the first few minutes. The sun was shining directly in our eyes, which made it very difficult to see more than a few feet ahead. Given the lack of visibility and the crowds, I did my best to get my pace up and I even moved up onto the sidewalk for a little bit. I decided I would try to run at a reasonably hard effort and see if I could beat my best 5K time from the last year (27:52). Once the course turned a corner, the sun was no longer in our eyes and it was much more pleasant.

I know all too well that 5K paces are supposed to hurt. But this is actually the best mile split I've ever clocked at a race during my history of wearing a Garmin (about 2 years). Not a bad way to start! Although it also meant I might have started out too quickly.

Mile 2 is usually the hardest, most painful mile for me, both mentally and physically. And painful, it was. It felt like Mile 2 would never end. Somewhere along the way there was a water station with some really great volunteers. I was thirsty, but I was so focused on keeping my pace that I didn't want to stop for water. Instead, I just barreled through.

I kept thinking about how much I hate 5Ks. I focused on pumping my arms. I also tried to focus on leaning forward slightly in an attempt to let gravity help propel me. I felt like I kept getting passed by other runners and it didn't feel good.

I was actually pleasantly surprised at my Mile 2 split. I knew I had slowed down and my Garmin had been showing paces anywhere between 9:05 to 9:15. So this was good.

As the remaining distance started ticking down, I started feeling better. I had studied the course map, knew the neighborhood well, and knew exactly where the finish line was. As the Mile 3 marker and the United Center came into view, I glanced down at my Garmin and saw that my time was 25-something. Yay! At that point I knew that I was going to beat my 27:52 time. The question was - by how much?

To quote one of Jonathan Toews's finest acting moments: 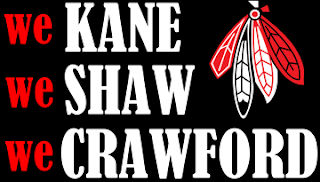 Little known fact: My all-time 5K PR, which I set in July 2001 (yes, over a decade ago), is 25:55. I am excited because I am finally starting to get within spitting distance of that PR. Maybe in another year or so I'll finally be able to break it?

I met back up with Erin, who had also run a great race. We headed into the United Center, collecting our Jonathan Toews bobbleheads along the way.


We found Gina, then settled into our seats to watch the scrimmage. Ahhh, it felt so good to be watching hockey again! I reveled in hearing the sounds of pucks hitting the sticks and boards, the old familiar goal horn, and the blare of Chelsea Dagger.


I didn't get many pictures of the actual scrimmage (another #BloggerFail), so here are a few pictures that I poached from the Blackhawks' Facebook page: 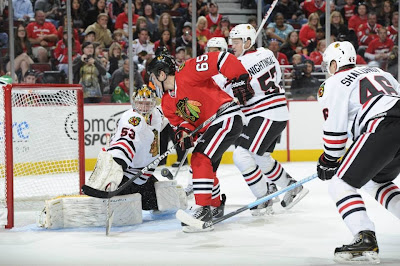 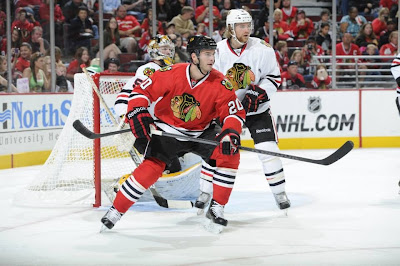 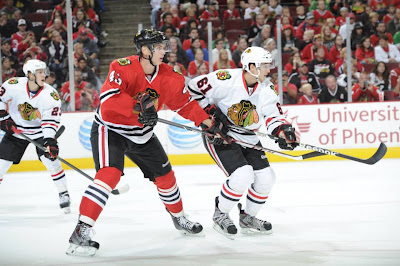 This was a great night for me. A great 5K race performance followed by Blackhawks hockey with great friends? For me, you can't get much better than that!

I am definitely ready for hockey season to begin now. Just two more weeks until Banner Raising night at the UC. Let the countdown officially begin!