I am still ridiculously backlogged with blogging. I have about 10 different post topics piling up in my mental queue. I've also morphed into blogger lurker status where I am still reading all of your blogs but haven't been commenting as of late. But, watch for my floodgates to get released over the next week or so. There will be blogger bedlam!

Last weekend Adam and I went to Pittsburgh with tickets in hand for two live sporting events. (As you all know, I am from Chicago but Adam is from Pittsburgh. Therefore, through Adam's influence I am a big fan of all the Pittsburgh sports teams in addition to my hometown Chicago teams.)

On the agenda for the weekend:

Sunday
The Pittsburgh Steelers vs the Baltimore Ravens at Heinz Field 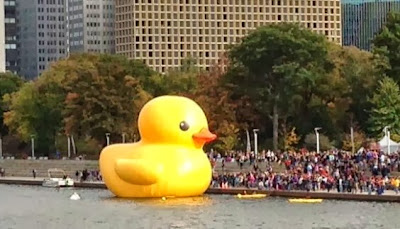 NOTE: It's more intimidating than you might realize to see a 40-foot tall duck on the horizon with eyes that are bigger than your head. The duck doesn't even blink when you stare at it.

Now, moving on to the Pens game. Here are some pictures (all but the upper right picture were taken during the pregame warm-ups): 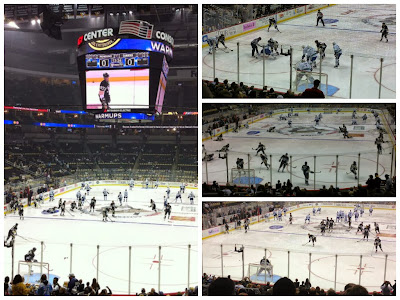 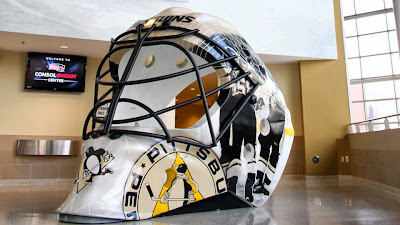 Next, the Steelers game. Some pictures:

I really just have one giant comment to make. Since we are talking about hated rivals, the Steelers and Ravens have one of the most, if not THE most vicious rivalry I've ever seen. Let me take a step back to share some personal context:

A few years ago Adam and I went to a Steelers-Ravens game in Baltimore. Heaven knows that neither Adam nor I were doing anything to draw attention to ourselves other than wearing Steelers attire. However, Ravens fans were kicking the back of my seat, elbowing me, screaming profanities in my face, throwing beer bottles and various other objects at us. It was literally to the point where I was fearing for my physical safety.

I understand that visiting fans are subjecting themselves to some ribbing by the home fans. But when that ribbing crosses the line to the point where someone may sustain physical injury as the result, it has gone too far. Visiting M&T Bank Stadium in Baltimore was by far the most scarring experience I've ever had as a sportsfan. I have definitely been to hostile sportsfan territory before. However, after what I experienced in Baltimore, all other places have pretty much rolled out the red carpet for visiting fans by comparison.

As a result of this experience, I was watching visiting Ravens fans carefully during the game to see how they were being treated by the home crowd in Pittsburgh. The verdict? For the most part, everyone left the Ravens fans alone. No special treatment, barely any acknowledgement, certainly no verbal or physical abuse. How's that for comparison?

OK, enough about that. Let's lighten things back up here. 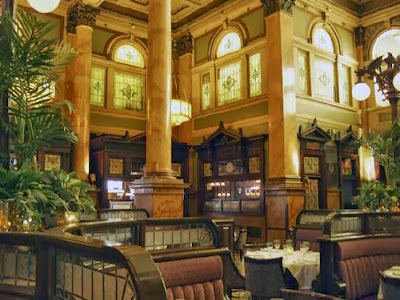 One last thing. The Pittsburgh Pirates' playoff run ended a couple of weeks ago, so obviously a Pirates game was out of the question this past weekend. However, to complete the trifecta of Pittsburgh sports for today, here's a picture from a Cubs-Pirates game that Adam and I attended in late September at Wrigley Field: 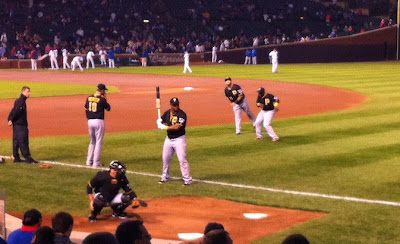 I realize this entire post has had pretty much nothing to do with running. So here you go:

I squeezed in a 30-minute run on Saturday morning before going to the Penguins game. WOW, are those local hills tough. (If you look in the dictionary under the term "Midwestern Flatlander" you will see my picture.) I tried shifting into "low-gear" (i.e. running with shorter strides) on those hills, but my glutes were still screaming bloody murder.

I know that some runners from Pittsburgh complain about how Chicago's flatness is so boring. But I've come to realize that I actually like boring. Boring is good!!!
Posted by emmers712 at 3:02 PM