I'm feeling much more laidback about the NHL playoffs and the Blackhawks in general this year. Being fan to the defending Stanley Cup champions really does take away a lot of pressure and anxiety. Yes, some may call it the "hangover" effect. But I'll still take it over the alternative! And regardless of would-be hangover or not, I really do enjoy NHL playoff traditions - most notably the playoff beard.

I also get a huge kick out of how the Blackhawks, uh, personalize the traditions.


Here are my predictions for the first round of the 2014 NHL Playoffs. (Please feel free to comment or email me if you want to let me know how wrong you think I am.)

Boston Bruins vs Detroit Red Wings
This one's a doozy. Both teams are deep, talented, and loaded with experience. Boston ended the regular season on an amazing hot streak, and walked away with this year's President's Trophy. Detroit got hit with injuries this year, most notably to Pavel Datsyuk and Henrik Zetterberg. However, Datsyuk is back and Zetterberg may also be back soon. I think Boston is favored overall, but in my opinion this series really has the potential to go either way. Plus, there are always upsets. So I'm going to go out on a limb on this one. (Sorry Samson, Peter, and any other friends who are legit Bruins fans.)

Tampa Bay Lightning vs Montreal Canadiens
I don't have a lot of in-depth knowledge about either of these teams. However, I do know two things. First, Tampa's starting goaltender, Ben Bishop, is out with an injury, and the Lightning lack goalie depth. Second, Tampa traded Marty St. Louis, the defending Art Ross winner, to the Rangers this year. It's hard to imagine that Tampa can overcome these changes during a moment of truth.

New York Rangers vs Philadelphia Flyers
Very interesting matchup. Vezina-winning Rangers goalie Henrik Lundqvist vs the Philly goalie turnstile of Steve Mason and Ray Emery (former Blackhawk!). New York bringing in Marty St. Louis. Alain Vigneault's first playoff coaching stint after trading places with John Tortorella. Inconsistent performances from both teams throughout the regular season, but Philly heating it up during the second half. This is another one that could really go either way.

Pittsburgh Penguins vs Columbus Blue Jackets
There is a lot of pressure on Pens goalie Marc-Andre Fleury going into these playoffs. More pressure than I can put into words, so check out Adam's blog for a really great discussion. Personally, I think the expectations of Fleury are unfair, given that the Penguins have been completely decimated by injury for much of the season. They did just get Kris Letang back, though, and are about to get Evgeni Malkin back. However, my biggest concern about the Penguins is their lack of depth. Columbus is one of the hardest-working teams I've seen and their goalie Sergei Bobrovsky won a Vezina for good reason. But in the end, this is a pretty straightforward pick for me.

Here's a fun flashback to the 2013 Blackhawks convention: A dance-off between Jonathan Toews's "Tazer Moonwalk" and Patrick Kane's "Kaner Shuffle"! (I was fortunate enough to see this dance-off live and in person!)

And now. Back to the predictions.

Anaheim Ducks vs Dallas Stars
The Ducks are a team with a lot of girth and they had an outstanding regular season. But, their goalie situation with Jonas Hiller/Frederick Anderson/John Gibson seems very precarious. Ducks coach Bruce Boudreau also has a history of his teams having great regular seasons but then flaming out in the playoffs. The Stars seemed to have shown significant improvement this year with the addition of Tyler Seguin. I've never seen a team look as giddily happy as the Stars did to make the post-season this year. The Stars also have a more experienced coach in Lindy Ruff. I'm going to go out on another limb with this one, too.

Colorado Avalanche vs Minnesota Wild
The Avs have been the surprise of the year. I don't think anyone would have guessed that they would go from their doom and gloom of last year to winning the division title this year under new coach Patrick Roy. They've certainly got momentum working in their favor after finishing out the regular season on a very high note. However, they lack playoff experience. The Wild are under fire to perform given all the talent they acquired in the last few years. But, the goalie situation in Minnesota is not good and I don't have a lot of confidence in Ilya Bryzgalov.

Los Angeles Kings vs San Jose Sharks
Another intriguing match-up. I just read that the Kings suffered the fewest man-games lost to injury this season. Everyone is still riding the Jonathan Quick bandwagon. The Kings are a solid, physical team. Comparatively, San Jose is a talented, scoring team but I don't think they match up well against the Kings. I think the Sharks need to play their own style of game in order to succeed, and I think it'll be tough for them to impose that style on the Kings. I also hate to say that Sharks goalie and former Blackhawk Antti Niemi has not looked sharp in recent weeks.

Chicago Blackhawks vs St. Louis Blues
Ordinarily this would have been a very difficult match-up. But the Blues have been absolutely crushed by injury in the last few weeks of the regular season. They limped to the finish line with a six-game losing streak, and they seem to have lost a lot of confidence in recent weeks. Goalie Ryan Miller was supposed to be the missing piece to the puzzle, but he doesn't have the experience in this type of situation. The Hawks have also had their fair share of injuries throughout the season, including playing the last two weeks without Jonathan Toews or Patrick Kane. But the Hawks injuries came at a time that allowed them to get some recovery in time for the playoffs. The Hawks also have the edge in experience, depth, scoring, and coaching. I think the Hawks' biggest challenge is to stay "hungry" enough after winning the Cup last year.

As per usual, no blog entry of mine featuring the Blackhawks would ever be complete without a great Hawks picture. I just love this wedding picture photobombed by Patrick Sharp: 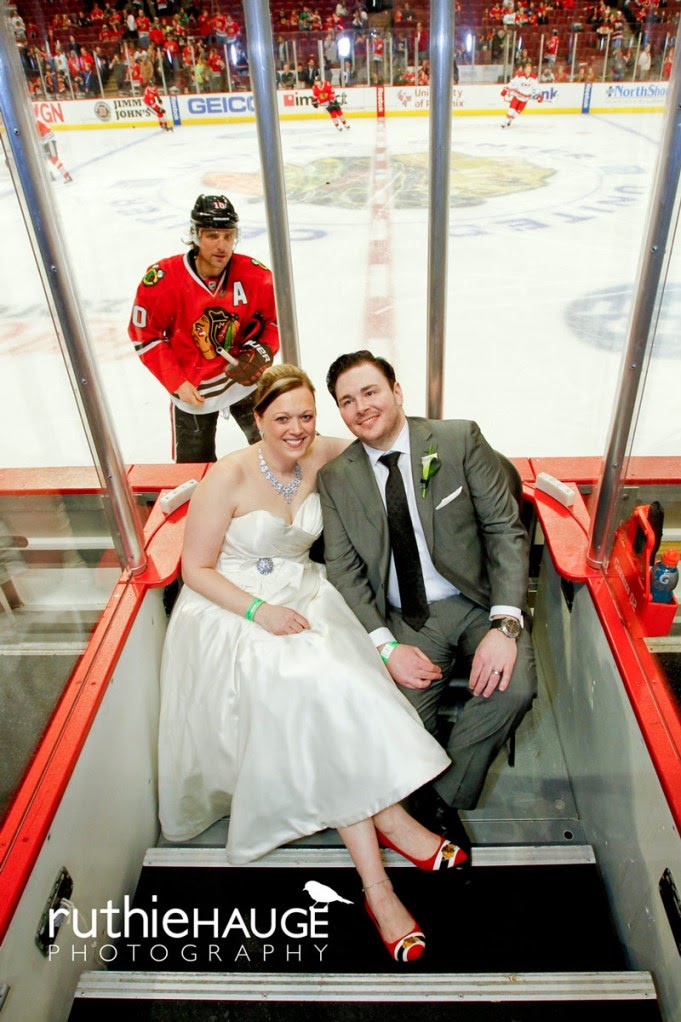