Continuing my recap of Illinois Marathon weekend and the Half I-Challenge, which began with the Illinois 5K on Friday night. 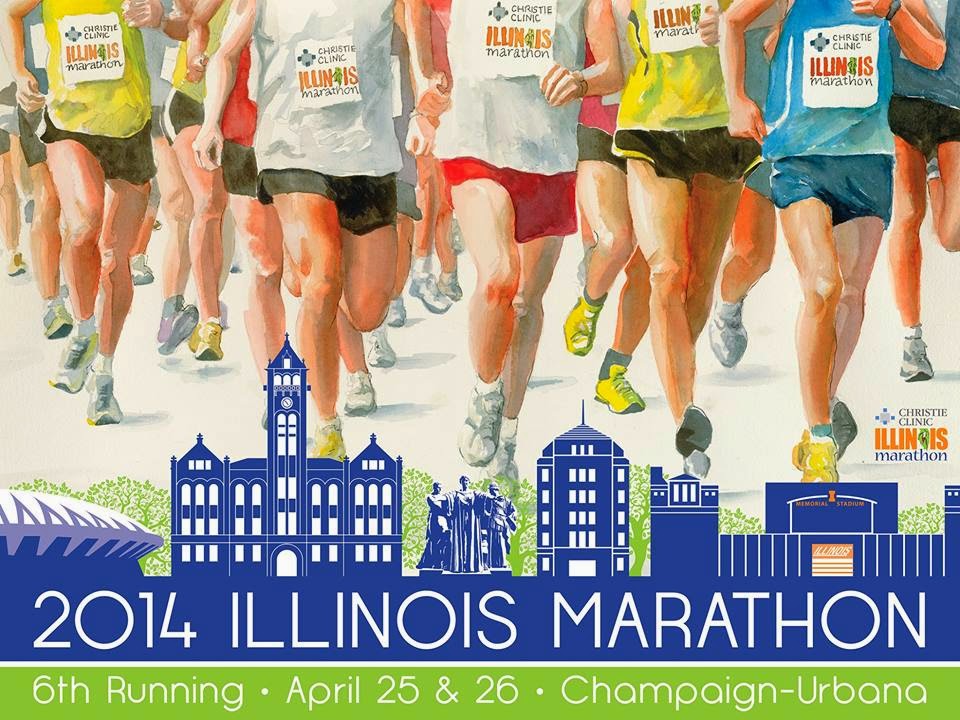 After finishing the 5K, Erin, Jason, Adam and I went to meet Anne, Bob, and two of their friends for dinner at Big Grove Tavern in downtown Champaign. I am a big fan of local-type restaurants, and this place didn't disappoint. We had a yummy meal and lively discussions about our good old student days, race and spectator strategies, and Pinky and the Brain, amongst other topics.


Unfortunately there were no TVs in the restaurant, but Adam noticed that the bar across the street had the Blackhawks game on. He and I alternated inexpertly squinting through the windows at the distant TV. When we saw the Hawks win in overtime, I did my best to hold back my exuberance until we had exited the restaurant. Another great tiding for the weekend! =D

We headed back to Erin's parents' house. Jason, Anne, and Adam went to the kitchen to hash out their spectating scheme. Unfortunately, the half marathon was going to be challenging for them to attack as a joint spectator group. Jason was the only one that knew the course; Bob, Erin, and I were all running vastly different paces; and all three of us were in different starting corrals. 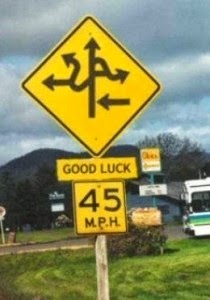 I went to go lay out all of my gear. Then I hit the sack.

The next morning, Bob, Erin, and I arrived on site bright and early, then split to find our respective corrals.

A wide range of professional pacers were available for both the full and half marathon, and I definitely wanted to take advantage. I had been going back on forth on whether or not to go with the 2:15 half marathon pacer vs the 2:12 or even the 2:10 pacer. Ultimately, after my meltdown of a 5K PR attempt from a few weeks ago, I decided to take things more conservatively. I went with the 2:15 pacer, whose name was Tom. At the race expo, I had been told that he was an extremely experienced and reliable pacer that had the accuracy of a metronome. This was comforting.


The corrals were crowded. Once my corral got underway, the course remained crowded. When I run races, especially longer races, I put forth a lot of focus on running the course tangents. However, this was difficult to do amidst the crowds. It took a few minutes for me to settle into my pace, especially as the course immediately turned directly into the sun. When we hit the Mile 1 marker I was happy to see that we were exactly on pace.

It had been my intention to do a 9:1 run/walk ratio during the race. Unfortunately, the crowds made it difficult to see and rejoin Pacer Tom after the breaks. After two walk breaks, I decided that walking wasn't going to work and that I would try to just run with the pace group for as long as I could. Given that I do all of my long runs with walk breaks in training, I knew this decision might come back to haunt me. But I went with it anyways.

The course ran through Campustown on Green Street, past the Illini Union and the alma mater, and into the residential neighborhoods of Urbana. This time I did get to see the alma mater along the course.


Our spectators were of all ages and they were cheerful and energetic. It was awesome seeing so many folks decked out in Illinois gear. I tried to read as many of their signs as possible. This was one of my favorites: 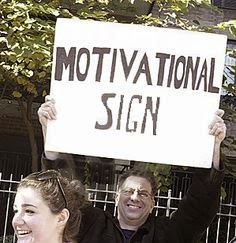 I focused on running the tangents where possible and keeping up with the pace group. The miles flew by and every single mile split was spot on. I started thinking that the pace felt really easy. I had to hold myself back from speeding up. Some gentle hills along the course helped keep me grounded. It was then that I realized the extent to which I had always been starting out too fast in my half marathons. I took my first GU at around mile 4.5.

Erin's parents' house was near the Mile 6 marker, and I knew that I'd be seeing the spectator group there. It gave me something to look forward to. Sure enough, I saw Adam waving his Terrible Towel. It made it easy for me to spot him from a distance. I didn't see Jason, but I waved jauntily to Adam and to Anne as I ran past. I was feeling proud that I had easily kept up with the 2:15 pace group to that point.

Near the Mile 7 marker was the first marathon relay interchange, which brought with it a huge cheering crowd. It was awesome seeing some folks handing off. At that moment I decided that I was officially adding a marathon relay to my runner's to-do list. (Who wants to join me?!?!?)

Shortly afterwards, volunteers were handing out GU packets along the course. I grabbed two of them and kept charging ahead.


As the miles ticked off without me taking any walk breaks, I started wondering when fatigue might catch up to me. I was still feeling really good. So good, in fact, that I was nearly in disbelief at myself. But Pacer Tom was keeping the mile splits dead on so I knew that everything was on target.

Around miles 8 and 9, the course ran through Meadowbrook Park. It is a beautiful and serene prairie area with bridges and grassy open fields.

Unfortunately the path was narrow and winding. Again it became hard to run the tangents and to stay with the pace group amidst the crowd. I tried to keep Pacer Tom in sight. Unfortunately I did have a few instances where I got caught in the crowd and had to put forth some small spurts to catch back up. I took a second GU at around Mile 9.5.

I was still waiting for fatigue to rear its ugly head. Mile 11 has historically always been a tough point for me. Physically I was only starting to feel tired, but mental fatigue was definitely threatening to set in. Seeing the Mile 11 marker made me think that I should have been tired. I mean, at that point I am always tired, right? And then, as self-fulfilling prophesies would have it, the fatigue did hit. Pacer Tom was starting to inch ahead of me and I began losing the steam to keep up with him. But I kept plugging away, still knowing that I'd been able to maintain my pace for most of the race.

After covering a lot of off-campus territory, the course re-emerged onto campus. I began noticing an increasing number of students amongst the spectating crowd. I even found myself thinking that they all looked so young, and wondered if I looked that young when I was a student. (Depressing, I know.) I ran by a fraternity house blasting music and offering libations to passing runners. It made me smile.

I reached mile 12 just shy of 2:04. I started calculating what pace I needed to run the final 1.1 mile to be able to PR. I was tired, my quads and feet were starting to burn, and I was ready to be done. But I knew that I was going to be able to PR - it was just a question of by how much. When I realized this I breathed a small sigh of relief.

Adam had told me he'd be on the course around mile 12.5. I started looking for him after the Mile 12 marker. I found out afterwards he had staked out a high-visibility spot and waited there for over 30 minutes. It had only been after I texted him my finishing time that he realized that we'd both missed each other. Very mysterious! (I joked with him that maybe it was because I ran by so quickly that I was a blur!) 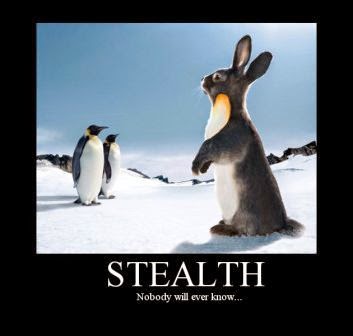 The full marathoners split off from the course right around mile 12.5. At that point, I looked down at my watch and told myself, "Only about five more minutes. You can do anything for five minutes. You've already finished this, just cross the line."

I was ready to start speeding up. But then, the course went through a hairpin turn in the final quarter mile, and a woman in front of me had some spectator (in jeans and sandals!) jump onto the course and start running next to her. There wasn't much room to maneuver around them so I hung back. Similarly, as we took the last few turns to enter Memorial Stadium, a few other folks were running in tandem and/or slowing down and blocking the path. I gritted my teeth, ducked around them, and high-tailed it to the finish line. It was a thrill to see myself on the stadium scoreboard as I crossed.

It took nearly three American presidential terms, but my previous half marathon PR of 2:16:37 from September 2002 has finally fallen. Hallelujah!


During my time at the University of Illinois, I went through so many life milestones, grew up so much, and learned so much both inside and outside of the classroom. I think it's very appropriate that I would be able to enjoy this running accomplishment at my old campus, as well.


Illinois Marathon weekend was an amazing, memorable, and incredibly well-organized series of events. My thanks go out to Pacer Tom for his unbelievably accurate timing splits, which were so instrumental in helping me reach my time goal. I am also very grateful to Erin and Jason for being such great weekend hosts; and to Anne, Jason, and Adam for spectating. And as always, I am eternally grateful to Adam for joining me on this running escapade down my old college lane!

My next race: the Chicago Spring Half Marathon on May 18
Posted by emmers712 at 1:25 AM