Happy Monday! I hope everyone is having a good start to the week.

I got back last night, albeit reluctantly, from an extended weekend in San Diego. What a beautiful city. This was my third time visiting, and I find more to like about it with each successive visit. San Diego is really my favorite of all the major cities in California.

Some details about the visit: Adam and I used AirBnB for the first time to stay at a great condo in a terrific location downtown, which was walking distance to a ton of entertainment options (thanks again, Seth!) Highlights from the weekend's activities included finally visiting the San Diego Zoo for the first time, hiking Torrey Pines Natural Reserve and Sunset Cliffs Natural Park, and enjoying the nightlife in the Gaslamp District.

I do love living in Chicago, but that gorgeous weather in San Diego is unparalleled. I am envious at the prospect of being able to train outdoors on a consistently year-round basis. It must be nice not to own any balaclavas and to have never heard of things like polar vortexes, whiteouts, or black ice! But, I digress.

Even before the San Diego visit was given a green light, I started looking for a local race to run. I was happy to find one that I was genuinely excited about – the LaDainian Tomlinson 5K. 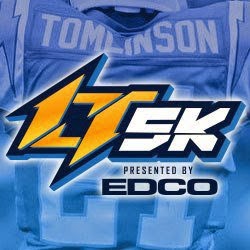 For those of you not familiar, LaDainian Tomlinson (aka “LT”) is a former running back for the San Diego Chargers. He is very well-respected for his work both on the playing field and in the community. The proceeds from this race were geared towards his charitable Touching Lives Foundation. I am all for running a race that goes towards a good cause! 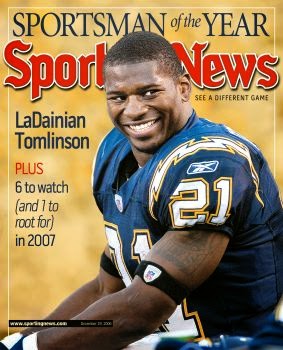 On Saturday morning, I was awake before sunrise, well before my alarm clock went off. (Ahh, the benefits of operating on Pacific Standard Time when your body is still used to Central Time!) I eventually downed a bowl of cereal and got dressed. Then, Adam and I drove to NTC Park in Point Loma, a scenic waterfront park where the race was taking place. It is also the site of a former naval training center.


After picking up my race packet, I ran a mile and a quarter to warm up. I tried some acceleration gliders in the end, and felt pretty good.

I had been torn on whether or not to attempt a PR at this race. The organizers were actually giving out finisher medals to all participants! Having previously only ever received medals for races 10 miles or longer, I thought it would be awesome to coincide a new 5K PR with this medal. I decided it might be worth a shot.

LT got on the microphone and addressed the crowd pre-race. After having only ever seen him on TV, it was cool seeing and hearing him up close in person. He is so normal and down-to-earth.

In lieu of doing a countdown to the race start, LT sent the runners off with a football call of “Down. Set. HIKE!”

Off we went. The race started on a wide road, so initially the crowds weren’t too much of a factor. Having started so many 5Ks way too quickly in the past, I told myself to keep the initial pace down. I needed to average less than an 8:20 mile to achieve a PR. In the first few minutes, I looked down at my Garmin several times and saw that I was running between an 8:20 and an 8:30. Perfect.

Then, the course narrowed. Considerably. It went from a four-lane asphalt road to a path that could probably only fit three runners in tandem. Much of the path was bordered by bushes and flower beds, too, so it was difficult to pass anyone. I got boxed in big-time and watched my pace drop down to around 9:00.

Allright, that was not the start that I wanted.

The course had re-widened and the bottleneck had eased up. Initially, part of me thought that maybe I could still PR. I struggled to do the math in my head while running. Once I realized I’d have to average an 8-minute pace for the remainder of the course, my heart sank. I didn’t have it in me that day to battle back. I started coasting a bit.

I began looking around at my fellow runners, noticing all the Chargers jerseys and paraphernalia being worn. I paid attention to the gorgeous scenery along the course, plus all the military artifacts throughout the park.

We went over the Halsey Road Bridge during the second mile. It was a nice, solid incline.

My calves began burning. I considered dropping down to a walk but ultimately refused. My body protested with a small knot of abdominal pain. Just in case I had any notions of still trying to PR, the bridge definitely quashed them all.

After cresting the incline, I tried to relax as I ran down the decline. Then I grimaced at the gravitational pressure on my legs.

No rest for the weary. As soon as we crossed the bridge, the course made a 180-degree hairpin turn and headed right back over the bridge again.

The course was filled with turns. We ran past the USS Recruit ship, which is a model of a Navy ship that was used for training purposes: 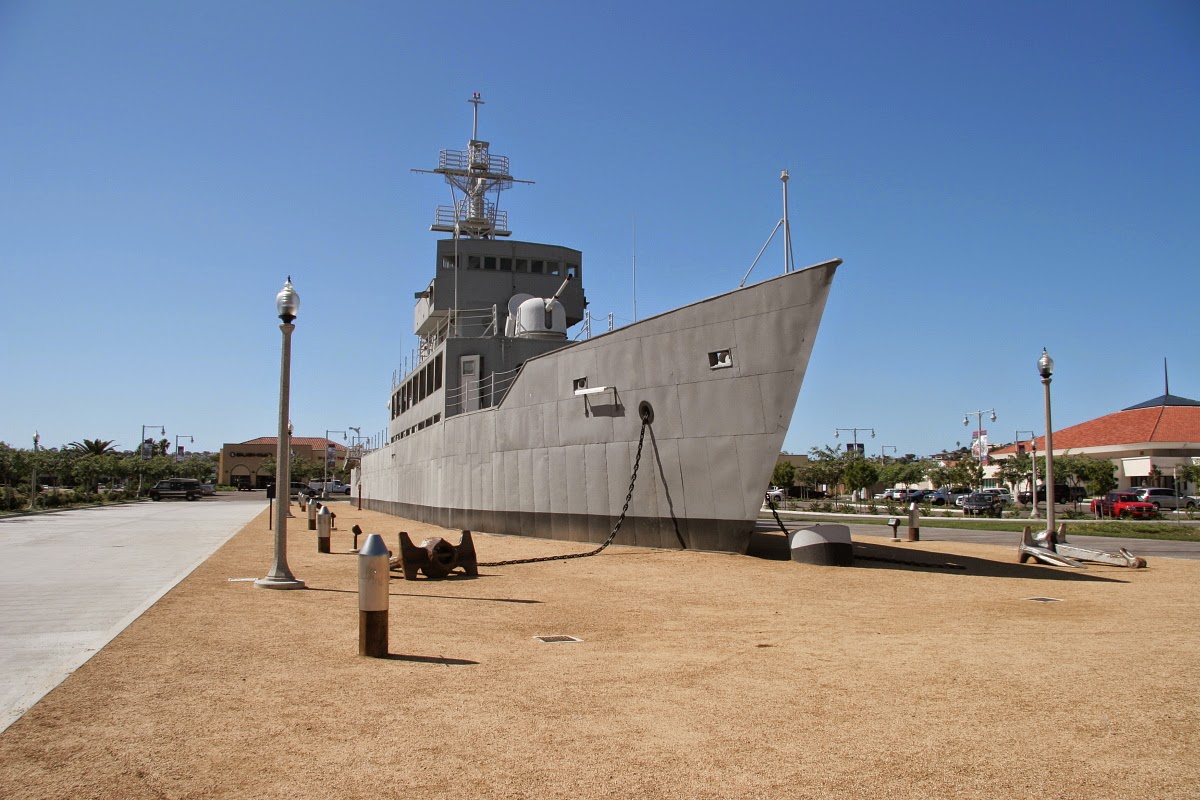 I was still resigned and trying to ignore the pain in my abdomen. Thankfully it was fading somewhat.

I didn’t want to run a positive split. Somehow that thought was enough to stoke my motivation. Around Mile 2.25, I started speeding up. I ignored everything else on the course but the course tangents and the people that I was trying to pass. I cut a couple of corners along the course to make passing easier.

My Garmin actually calculated my third mile a little short. Those corners added up more than I had anticipated!

Thank God for being able to see the finish line. As I was sprinting to the end, I realized that I actually had more left in the tank than expected (this is both good and bad). Adam took this picture of me shortly before I crossed the finish line: 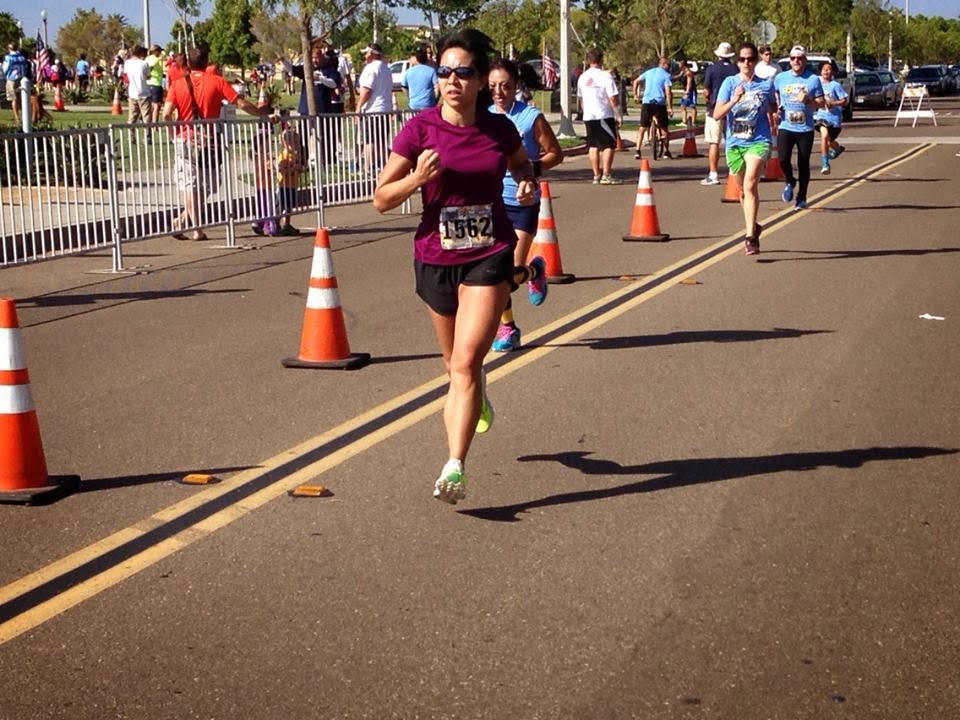 My official time was 27:24. I wasn't ecstatic. I had definitely been hoping to do better than that. But, it was still nice to add to my medal collection:

Time to go check out the post-race party. There was a very extensive array of refreshments. In addition to the usuals like bananas, bagels, muffins, and water, there were Core Power milkshakes, Pop Chips, Honest Tea, Arctic Zero frozen treats, Kind granola bars, Chick Fil-A giveaways, and lots of other food samples. Very cool!

LT and a few other Chargers players had a booth set up to sign autographs. Folks started lining up in droves over an hour before the booth was even scheduled to open.


Since the line was so long, I opted to skip any autographs. Instead, I stood to the side of the booth and peered in at the action between event security personnel. Unfortunately I couldn't get any good pictures. But it was fun to see all the excited Chargers fans, especially all the kids!


All in all, even though I didn't run as well as I wanted to, I enjoyed this race. The location was beautiful and the event was filled with upbeat festivity and energy. Plus, it really was cool getting to see LaDainian Tomlinson in person.

My hat goes off to LT and his event team for putting together a really well-organized race that benefits such a good cause!