This past Saturday, I ran the Michelob Ultra Chicago 13.1 Half Marathon. This was my third consecutive year running this race (in the past two years, it had a different sponsor presenting it).

I had no plans going into this race other than to have fun and enjoy the Lou Malnati's pizza at the finish line party. I hadn't done any focused training for the past few weeks, instead choosing to be more consistent with my physical therapy exercises and cross-training. I also had a lot of family events taking place this past weekend. This race was something I was squeezing into the schedule.

On Friday afternoon, Xaarlin told me that Adele (who I had met before at a Nike Training Club event) was running the race as her first half marathon ever. She mentioned that Adele was looking for a running buddy to keep her company, would I be up for it?

The next morning, I was up bright and early to drive to the South Shore Cultural Center on the city's south side. I found street parking on 72nd Street, wolfed down a peanut butter sandwich and a banana, then walked over to the race site.

I saw Erica on the way in and said hi. After making a quick stop at the portapotties near the beach (no lines!) I met up with Zenaida. Then we found Adele and her friend Amy, who was in town from Minnesota for the weekend. A few minutes later, Pete came by. We all chatted for a bit. (Pete was telling us how his legs were trashed from playing softball earlier in the week, but that he was still ready to run. Wow!)

Here's a picture of us pre-race. (Sorry for the blurriness.)


Pete headed off to his corral, and then the rest of us lined up together in Adele's corral. There was a lot of energy in the air and the time went by quickly as we were waiting to start.

Adele had been battling some IT band pain in the weeks leading up to the race, so we all made sure that she was feeling okay. The first few miles flew by as we chatted about our families, training, etc. We all enjoyed the beautiful Jackson Park scenery. 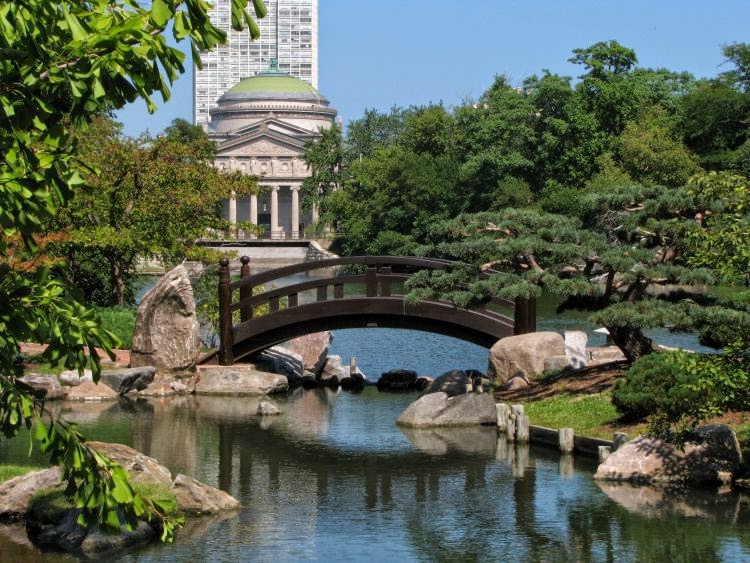 Adele and I maintained a steady pace. Around Mile 3, Amy began speeding up and we told her we'd see her at the finish line. Unfortunately Zenaida wasn't feeling great, so she was taking periodic walk breaks.

There were a number of patches along the course where we saw oncoming runners. I unexpectedly saw Amanda early on and shouted a quick hello to her. Later I looked for Pete and Erica, but unfortunately didn't see either of them.

The temperature was in the upper 60s/low 70s and it was bright and sunny. There were a lot of aid stations with plentiful, enthusiastic volunteers. We walked through each station and got drinks at every one. One aid station handed out Clif Shot gels, which was new this year and very appreciated by me. We enjoyed the course entertainment (bagpipe players, a drill team, taiko drummers, lots of live bands). We also made a quick bathroom stop at the colorfully painted outhouse around Mile 5. It felt so luxurious to wash our hands using cold running water!


We knew that Xaarlin would be spectating near the course turnaround, which we thought was before Mile 7 (it was actually closer to 7.5). We were really looking forward to seeing her and talked about it for several miles in advance. Having friends along the course is the best!

Xaarlin took some pictures of us in action: 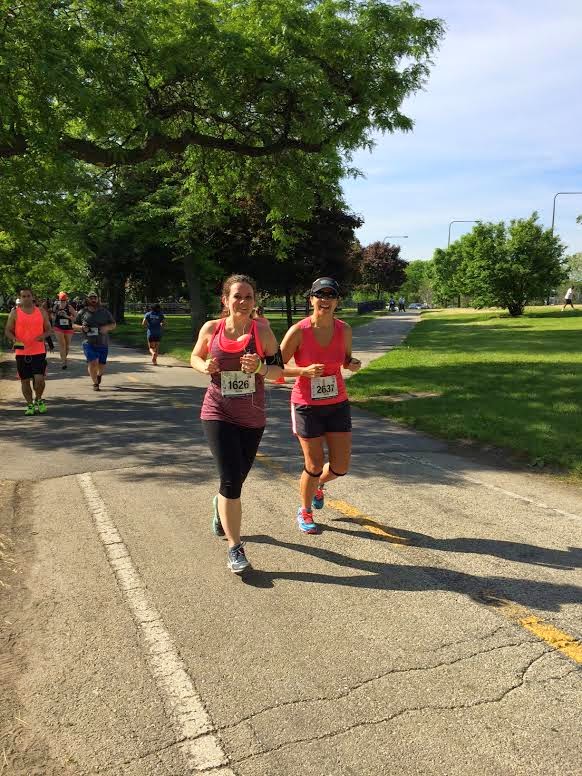 Xaarlin jumped onto the course and ran with us for a mile or two. She even got this fabulous selfie of the three of us near the Mile 8 aid station. Add this to my collection of best race pictures, ever!


As much as we wanted Xaarlin to stay with us for the rest of the course, she had left her bike near one of the aid stations and eventually had to go back.

Adele and I kept going. She was staying remarkably consistent and upbeat. She was also talking easily, which was another testament to how well she was doing. (Heaven knows that when I'm dying out on the course, intelligible/audible words are really hard for me to string together.) As the miles ticked by, she mentioned that she couldn't believe that we were really doing this. She was doing so awesome and I kept truthfully telling her how great she looked!!!

Adele told me that she had trained up to 11 miles. As we approached that point, she was starting to feel some fatigue and was working hard to keep going. I knew that going beyond the peak training distance was potentially challenging from a mental standpoint, as well. I tried to distract her by having us count the number of folks that we passed in the final two miles. It was a good motivator. 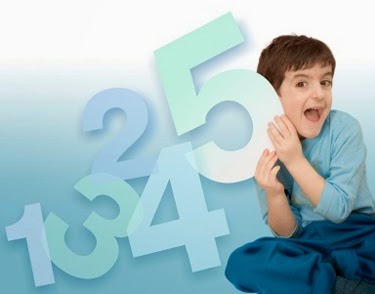 We didn't want to make it too obvious what we were doing, though, of course. So with each person we passed, we tried to act nonchalant as we whispered the counts to each other. As the number rose, we giggled a few times while joking about getting our count to the legal drinking age, hitting the big 3-0, etc. We lost track of the exact total number in the end, but it was somewhere around 50!

I put forth lots of focus on running the course tangents, especially in the final stretch. We saw Amy and Zenaida as we went through the finishing chute and they cheered us on. Zenaida took this picture:


Then, we crossed the finish line - and Adele put the finishing touches on completing her first half marathon!!! Done and DUSTED.


HUGE CONGRATULATIONS to Adele! I was so happy for her! And I was seriously blown away by how strong and composed she stayed the entire time - even during those tough final miles and especially while battling knee pain. Way to go, Adele, and way to push through!!!

I think Adele is going to get hooked on half marathons now. =D

As for me? I had a BLAST. It was so much fun running with Adele and everyone, plus getting to see so many friends at the festivities. And did I achieve my goal of finally enjoying the Lou Malnati's pizza at the finish line?