I almost decided not to write a recap for the 2014 Disney Wine and Dine Half Marathon from last November. This was for various reasons. Namely, my blogging mojo was in the dumps; the entire race got plagued by torrential rainfall; and things were busy at work. As of this point, I've run a total of three races that I haven't yet recapped. #BloggerFail

Over the past week, I started thinking about how it's been valuable for me to have those old recaps, especially as time goes by. You live, you remember, and you learn from all of those past experiences. Plus, it was at this race that I did finally achieve my goal of earning my Disney Coast to Coast medal! That is certainly worth some reflection, no?


With that, here is Part 1 of an extremely belated recap of my weekend at the 2014 Disney Wine and Dine Half Marathon (even if for nobody but myself).

Adam and I flew down to Orlando very late on Thursday night of race weekend. We had decided to stay at a Disney resort, as I'd heard the perks were good for Disney races. All race weekend transportation would be provided for runners and spectators. Plus, RunDisney was providing special room rates for all runners. All the more reason to give them a whirl!

Disney World resort guests receive Magic Bands for use during their stay. These little wristbands are your key to pretty much everything. They serve as your room key, credit card, park tickets, Fast Passes, dining reservation check-ins, etc., etc. The only thing these Magic Bands can't do is read your mind (I think).


Unfortunately we ended up having to wait for a long time to catch a Disney bus from the airport to our resort. We had landed in Orlando around midnight. I thought we would be the only ones trying to get transported. It was a surprise to find quite a crowd of folks already lined up. Many were already donning their mouse ears. Apparently the Mouse is like the city - he never sleeps.

During the bus ride, I exuberantly watched the Disney cartoons being shown on the in-bus televisions (yes, I am an adult well in my 30s). We finally arrived at our resort around 1:30 AM. I made a mad dash to the front desk to check in. I promptly received a room in the remotest corner possible at the resort. No joke, it was about a 10-minute walk from the front desk to our room. I guess that's what happens when you arrive in the dead of the night. The long walk was reminiscent of the enormous resorts in Las Vegas!

The next day, Adam and I spent the afternoon at Disney's Animal Kingdom. After dinner, we hopped over to Epcot to watch the amazing fireworks. We had a really, really great time. I just love the parks! Some of my favorites from the Animal Kingdom included the Kilimanjaro Safaris, the Festival of the Lion King, and dinner at the Tusker House restaurant. And of course, no visit to Disney is complete without seeing the most famous mouse duo in the Milky Way Galaxy.


On Saturday morning, I met up with Zenaida, who had flown in from Chicago that morning. She was staying at the same resort that Adam and I were at, which made it very easy to catch up. (Check out her race recap here.)

Zenaida and I caught a Disney bus to the race expo at ESPN Wide World of Sports. On the way in, we decided to get into the "wine and dine" spirit of things: We also couldn't resist taking some goofball photos at one of the vendor booths: 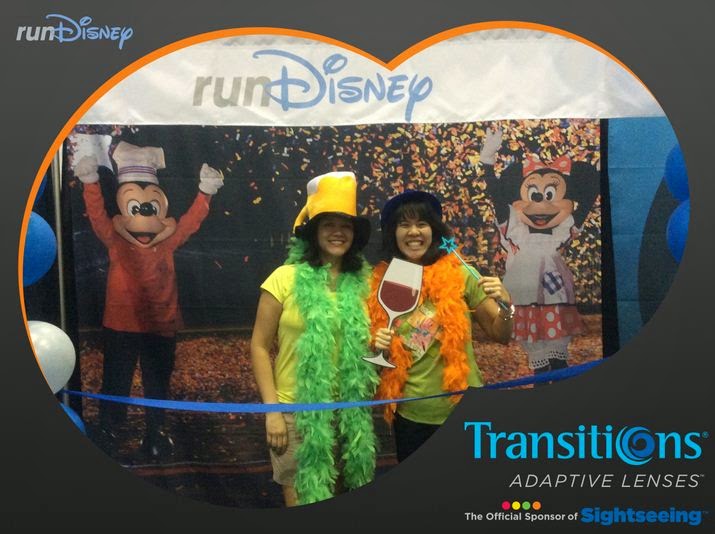 We picked up our packets and wandered around for a bit, collecting free giveaways (Fruit! Snacks! Socks!). We headed back to the resort for lunch. Afterwards, I went back to the room to relax and take a nap.

As bad luck would have it, the weather forecast was predicting rain starting that evening around 9:00 PM and lasting throughout the night. This was the absolute worst possible timing for a race with a 10:00 PM start and a post-race party scheduled to go until 4:00 AM. My experience with Chicago weather forecasters shows that they are wrong about 57.31% of the time. Therefore, I was hoping and praying that the Floridian weather forecasters would be just like their Midwestern brethren. Much to my dismay that afternoon, the skies were already starting to darken and the wind was already starting to pick up. Curses!


Adam and I had an early-evening dinner reservation in Downtown Disney. I was originally planning to come back to the resort after dinner to change clothes before heading to the start village. However, at Zenaida's suggestion, I decided to bring all my gear to dinner, just in case. This turned out to be a lifesaving decision.

We left the resort with what we thought was ample time to get there on Disney transport. Enroute, we got caught in horrific traffic and construction delays. I am not exaggerating that it took us a good HOUR to get door-to-door from our room to the restaurant. Good lord!!!

By no means would there have been enough time to stop at the resort after dinner. Instead, I made the best of my post-dinner time crunch: I commandeered one of the restaurant's bathroom stalls to change into my gear. It was a good thing nobody was waiting in line behind me.


After dinner, there was more traffic and long shuttle bus lines to the start village. Even before any precipitation, the weather was already on the cool side. This made me apprehensive. I was thankful that the buses were heated. It made the lengthy ride feel more worthwhile.

It started drizzling while I was waiting to check my gear bag. Several folks were wearing trash bags and ponchos. I instantly regretted not having anything waterproof for myself. The rain was gradually intensifying. There was no protection anywhere from the elements. I joined the masses and sat on the ground in my starting corral. During the hour or so that I was waiting for the race to start, I was already getting pretty soaked. When the corrals started moving, I got up and was somewhat amused by the dry spot that my butt left behind on the asphalt.

Coming up next: Neither rain, nor wind, nor cold, nor dark of night stays these runners from the completion of their Disney race.
Posted by emmers712 at 6:00 AM