Since I've been in major catch-up mode with blogging, I am FINALLY sharing my recap of the F^3 Lake Half Marathon that I ran on January 24. (I've been working on this in bits and pieces for weeks.)

After I officially registered for F^3, I spent the next several weeks quaking in apprehension, thinking, "What did I just get myself into?" However, Mother Nature blessed us with absolutely fantastic weather for race morning. It was sunny, the temperature was in the upper 30s, and there was almost no wind. For a late January race along Chicago's lakefront, I couldn't have asked for anything better! I was so relieved. Now that I didn't have to worry about the weather, I was so excited to enjoy the gorgeous scenery.

The nice weather actually made for some other challenges, though. All along, I was thinking that I'd need to wear a full arsenal of my best cold-weather gear. I wasn't sure what to wear for the warmer temps. I debated across a dozen combinations of what types of layers to wear. I finally just stuffed a bunch of options into my gear check bag. 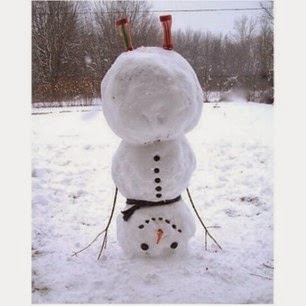 The race started at a very comfortable 10:00 AM. Can I just say how much I love having this late of a start time? I didn't have to set my alarm, I was actually hungry for breakfast when I got up, and I had ample time to hydrate and then let nature run its course pre-race. Since we'd literally be running into lunchtime, I had a heartier breakfast than usual.

Adam dropped me off at Soldier Field at about 9:15. I went into the race headquarters at the United Club, which were SO NICE. It was a heated, carpeted, roomy indoor space with ample bathrooms; lots of tables, chairs, and couches; bars and TVs; indoor gear check; and plenty of room to stretch out. All of us F^3 runners were living large in that club.

I could already tell just from the walk in between the car and the building that I was overdressed. Therefore, I popped inside one of the bathrooms (almost no lines!) and changed things up. Then, I took care of my last minute gear prep and dropped my bag off at gear check.

The crowd began making its way to the starting line.


On the way, I ran into Pete, and then a few minutes later I saw Erica! It's always so great to run into friends at these races. It makes the events feel much more personal.

I emerged outside. Ahhh, sun and visible blue sky at the starting line! 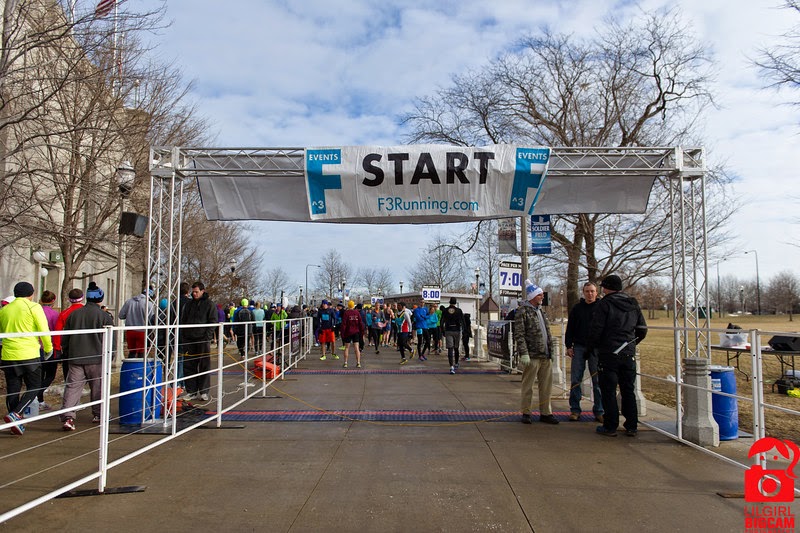 After waiting about 15 minutes in my corral, I got underway with a loop around Soldier Field. 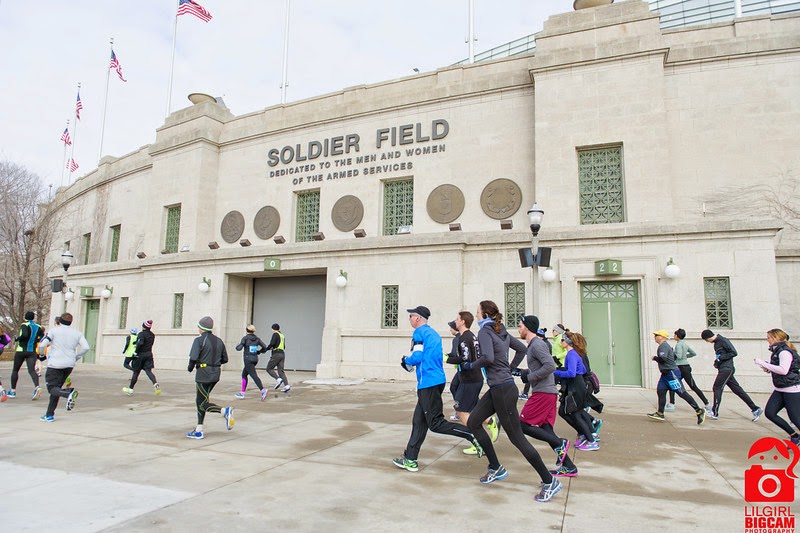 I was feeling good all around. I was so buoyed by the unexpectedly pleasant temperatures that my mind started running away with possible goals. I'd heard of many other folks who had PR'd or run very strong races at F^3. Even though I was not in peak training mode by any stretch of the imagination, I entertained the idea of trying to go for a PR.

The course was an out-and-back along the lakefront path. The path was not closed to the public, and usually races along the path are plagued by bikers and other non-race users jockeying for position. The relative solitude of the path this day was nice.

Near McCormick Place, I saw a familiar owl hat and did a double take. Sure enough, it was Xaarlin!!! What a wonderful surprise to see her! She jumped onto the course and ran with me for a a little bit. It was fabulous having her company and having the time to catch up with her. The first few miles flew by as a result.

Xaarlin stepped off the course around Mile 4. Then it was on to my own devices to keep the pace going. I was reasonably on pace to attempt a PR, but I knew that I might be dealing with some headwind after the turnaround point.

The course turnaround point was at 63rd Street. The numbered streets are nice since they make it easy to count down the distance. =D

As I started seeing oncoming runners, I began looking for familiar faces. I saw Pete looking like he was in the zone, and exchanged a high-five with him. Then I saw Erica looking strong amongst a pack of runners, and shouted a hello to her. Later, I saw Kelly, who also looked like she was in the zone. I think I caught her off guard when I shouted hello. I was keeping an eye out for Lauren, who I knew was out there somewhere, but unfortunately I did not see her.

I think this picture was taken somewhere around Mile 6:


Volunteers were handing out miniature Clif Bars at the Mile 6/8 aid station. Such a treat! I elected to stick with my GU for fueling purposes, but I pocketed two of the Clif Bars for afterwards.

Close to 63rd Street, my right knee started hurting. This made me nervous. I thought, "I'm already near the turnaround point, I have to get back to the start line somehow." I tried to change my footstrike so that I was hitting more of my forefoot instead of my midfoot. That did seem to help. A mile or two later, the knee pain dissipated enough that I stopped worrying about it.

After the turnaround, I did indeed start feeling the effects of the headwind. I got cold enough that I put my gloves back on for the remainder of the race. I wasn't feeling terribly fatigued, but was not ready to attempt the negative split I would have needed to PR. I decided to just try to finish strong.


My final chip time was 2:17:31. This will go down in the books for now as my fourth-best half marathon finish ever. Not bad!


I had a great time running the F^3 Lake Half Marathon! It was very well-organized with enthusiastic volunteers and great swag (technical gloves and a beanie instead of the usual race shirt). The pre- and post-race set ups at the United Club in Soldier Field were such a luxury.

Folks talk about this race as a "badge of honor" race for good reason. I was petrified of what the day might bring, so I was extremely relieved to get away with taking the risk. Admittedly, I would probably only choose to run this race again via a last minute registration (aka having a better idea of the weather forecast). Weather risks aside, though, this was really an awesome event. What a terrific way to keep the training motivation high during the wintertime!

Thanks again to the folks at REM-Fit for sponsoring, to all the organizers and wonderful volunteers, and to Agnes for bringing me into the fold!