This past Saturday I ran the Cinco de Miler for the first time.

My original motivation for this race was purely that I liked the race shirt and medal. However, due to an unpleasant weather forecast and inconvenient-to-me logistics, this was yet another race that I seriously considered DNS-ing. Once again, I ultimately didn't want to waste a perfectly good registration fee. So again I found myself reluctantly preparing my gear for what was probably going to be another rain-soaked morning.

It rained pretty hard the night before the race. When I got up that morning, the city was blanketed by a thick layer of fog with poor visibility. But, I was relieved to see that it wasn't raining! I dutifully ran out the door for the two-bus trip down to Soldier Field.

Here are some pictures that I snapped of Soldier Field enroute to the race festivities: 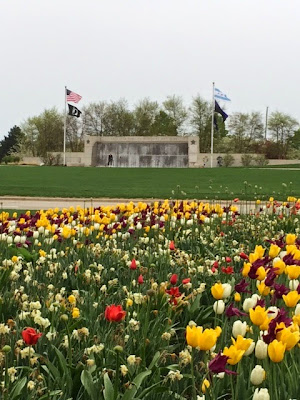 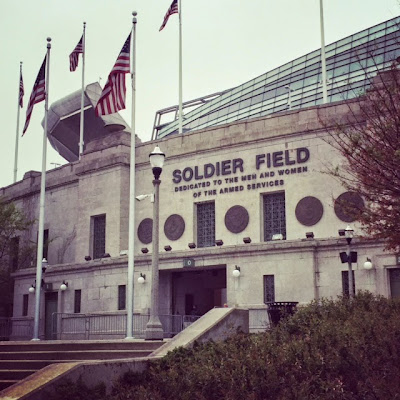 As you can see, the weather was very overcast. Temps were in the lower 50s, but gusty winds made it feel much colder. One of the parking structures had an indoor restroom, so I made a stop. While inside, I reveled in the few minutes of protection from the elements. Ahhh, heated bathrooms!

I arrived on site with a lot of time remaining before the start, so I wandered around for a bit taking pictures. I got a horchata sample from a vendor, then took an obligatory cut-out picture (don't laugh, I know I look funny): 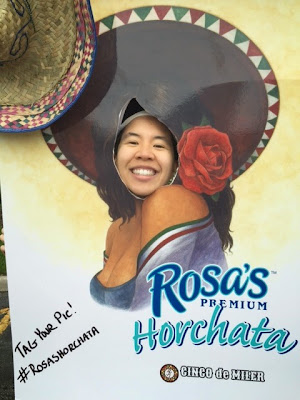 Check out the course marshalls decked out in sombreros: 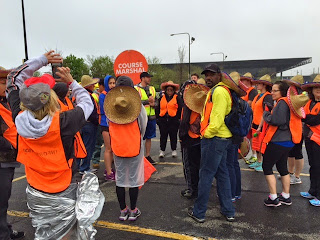 This was the view of Soldier Field and the fog-covered skyline from the south tailgate lot: 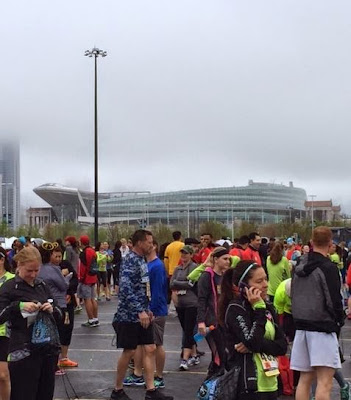 You can't tell in the picture, but many runners were wearing Mexican-themed outfits and costumes. Very festive!

Since it was so cold, I wanted to keep my jacket on as long as possible. I waited as long as I could to drop my bag off at gear check. Then I dashed over to the starting corrals and squeezed my way in.

The race director made announcements warning everyone of rough patches and standing water on the course. He warned us to be especially careful going underneath the McCormick Place tunnel, which was not very well lit. Good to know.

The organizers played a cheerful recording of the Mexican national anthem which drew spirited "Viva Mexico!" shouts from many runners. Then, we turned around to face the American flags at Soldier Field as the U.S. national anthem was played.

During this time, what appeared to be a remote-controlled flying camera was zooming back and forth over the starting corrals: 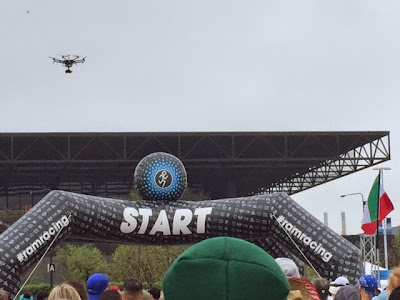 It was funny watching the little contraption buzz around. I followed suit with many other runners who were jauntily waving and posing for the flying camera.

Right on time, the gun sounded and the runners took off.

Almost immediately, the course went underneath the McCormick Place tunnel. As warned, it was indeed dark, with bumpy asphalt and puddles of water. Most folks were moving through with ample caution. I lost the signal on my Garmin, too.

After we re-emerged from the tunnel, I tried to settle into a good pace. I hadn't done any warm up, so I was feeling cold and clunky.

The Mile 1 marker came up quickly with an aid station and a mariachi band.

Other than my knees feeling creaky, I started feeling better during Mile 2.

The course was an out-and-back on Lake Shore Drive and the lakefront path. As we made the turnaround at Mile 2.5, we were hit by a wall of wind. Yikes! I averted my gaze from the big waves crashing along the shoreline. I could only focus on fighting the wind while trying to make sure I didn't lose my hat.

I was displeased seeing my Mile 3 and Mile 4 splits getting progressively slower. Mile 4 felt like it would never end.

In the final mile, I told myself to make it my best of the day. There were two women on my tail who kept saying, "We're almost there!" (even though we weren't). I didn't want them to pass me so I kept speeding up. Then, in the final quarter mile, some runners who had already finished were yelling, "There are churros at the finish line! Go get the churros!" That got me into a sprint. =)

Time for the post-run fun! Here is the super cute medal (one of my all-time favorites!): 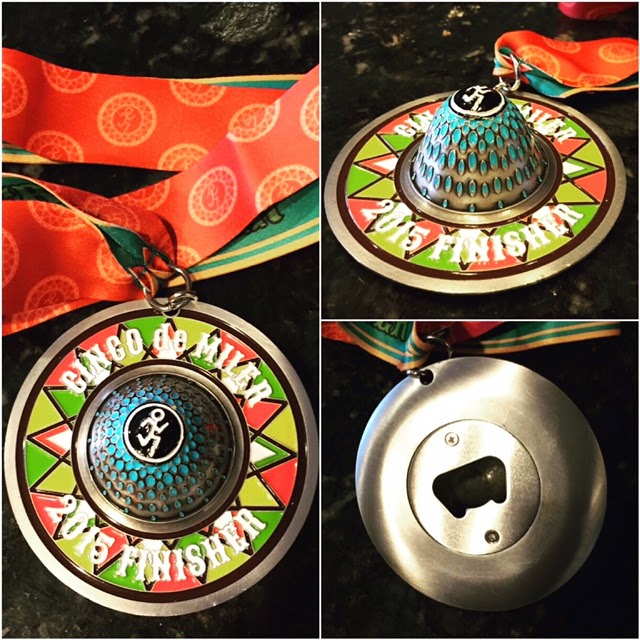 and here is the awesome selection of food and drink:

In addition to plenty of beer for the adults, there were lots of family-friendly activities. I saw inflatable bounce-houses, photo opportunities, more music, and several pinata zones.


In summary, the Cinco de Miler was an awesome event! It was very well-organized and I really loved all the swag and entertainment. It was really too bad that the weather was so cold and windy. Even so, this didn't dampen the enthusiasm of many families who were having a marvelous time at the fiesta.

This was my first time running a race put on by RAM Racing and I thought it was fantastic. I am already looking at their other offerings for future race ideas. Maybe the Bucktown 5K in September? Probably the Hot Chocolate 15K in November, too. Choices, choices!

My next race: the Sunburst Half Marathon on June 6
Posted by emmers712 at 2:46 PM