Finally, finally, FINALLY getting around to sharing the last of my Israel travel recaps. Sorry this post has taken so long! (If you missed my earlier recaps, here's my Israel arrival, Tel Aviv recap, Jerusalem Part 1, and Jerusalem Part 2.)

While we were staying in Jerusalem, Adam and I took a day trip to Masada and the Dead Sea.

The Judaean Desert
We left Jerusalem early in the morning and drove into the Judaean Desert. The landscape was no joke. Unlike the deserts of the western U.S. with which I'm pretty familiar, the Judaean Desert has no cactus, no tumbleweed, no flora or fauna of any kind. There wasn't a single remnant of life to be seen. It reminded me of the biblical images you see in The Ten Commandments, et al. 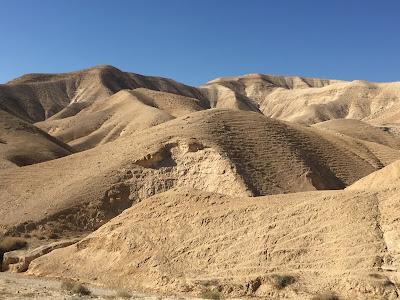 Jerusalem is approximately 2,500 feet above sea level. By comparison, the Dead Sea is nearly 1,400 feet BELOW sea level and is the lowest land elevation in the world. We stopped at the sea level demarcation point enroute. 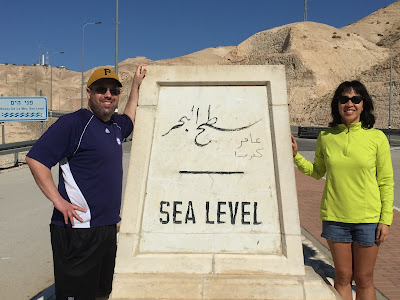 We drove past a number of kibbutzes (agricultural settlements) as we approached the Dead Sea. This picture was taken from a visitor center and was one of our first glimpses of the water. The mountains in the distance are Jordanian. Masada
After about a 90-minute drive, we arrived at our first destination. Masada is a desert fortress atop an isolated rock cliff overlooking the Dead Sea.

Masada has a lot of history which I won't attempt to cover here. In short, it's a UNESCO World Heritage site and was the site of the last Jewish stronghold against the Roman invasion. From the UNESCO website:

"Masada is a symbol of the ancient kingdom of Israel, its violent destruction and the last stand of Jewish patriots in the face of the Roman army, in 73 A.D. It was built as a palace complex, in the classic style of the early Roman Empire, by Herod the Great, King of Judaea, (reigned 37 – 4 B.C.). The camps, fortifications and attack ramp that encircle the monument constitute the most complete Roman siege works surviving to the present day."

Many folks choose to hike to the top of Masada. It's a popular activity in the early morning to view the sunrise; however, for us to do so would have meant waking up at around 3:00 AM! No, thank you.

Adam and I elected to ride a cable car to the top. Here's the view as we were beginning our ascent: 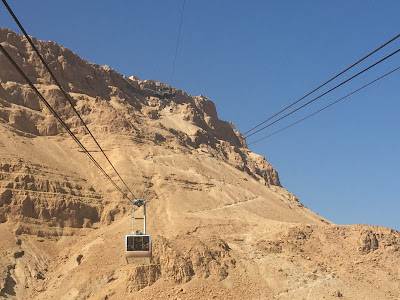 Once we arrived at the top, we walked around marveling at the amazing archaeology and views.

Below is another view of the Dead Sea and the Jordanian mountains. The Dead Sea has been receding in recent years. I understand this is primarily due to the diversion of water sources for agricultural purposes and other usage. The seawater levels have declined so much that the Dead Sea has now split into two bodies, which you can see here: 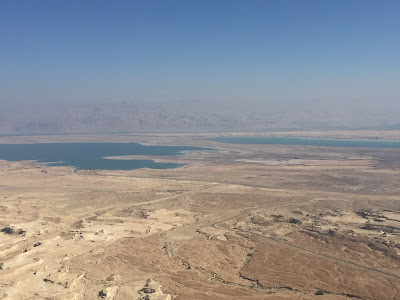 This is the "iconic" view of Masada on top of the cliff: 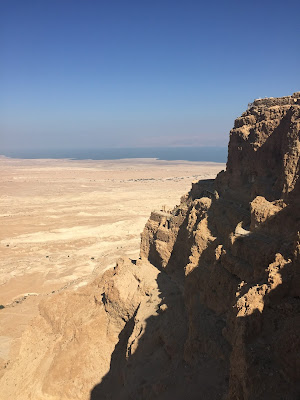 Here is an example of the archaeological ruins. The fortress design was quite sophisticated, especially given the era in which it was built. 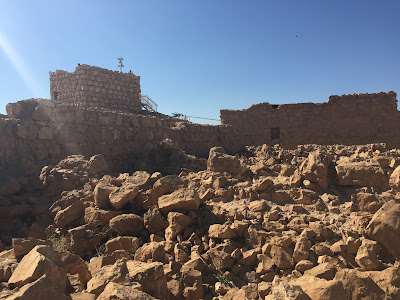 Here's an example of what the ruins looked like from the inside. The black line denotes where the walls stood when the fortress was originally discovered. Anything above the black line was reconstructed. 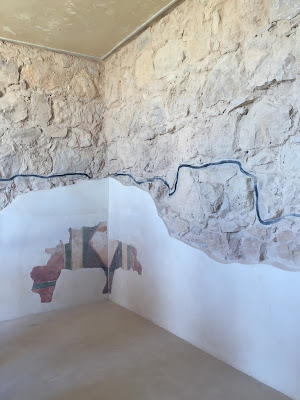 This was Camp F, one of several Roman legionary camps built outside of Masada in preparation for Roman siege: 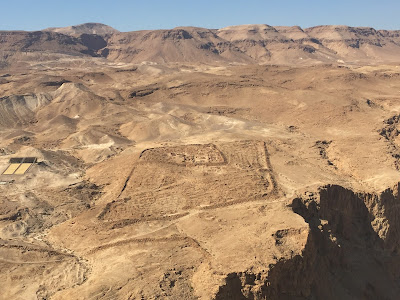 After completing our tour at Masada, we were ready to move on to our next destination.

The Dead Sea
It was a quick drive from Masada to the Ein Gedi Spa along the Dead Sea.

Enroute, we learned the Dead Sea is almost 10 times saltier than the ocean, meaning no living creatures can survive in it (hence the name). The water and mud are filled with minerals which are reputed to be highly therapeutic.

Ein Gedi has sulfur pools, mud baths, a traditional swimming pool, a private beach, and locker rooms. The premises were initially built along the Dead Sea shoreline, but due to receding water levels the beach is now quite a distance away. The facilities provide a tractor-shuttle to transport visitors back and forth, but Adam and I decided to walk. It took us about 15 minutes on foot.

Here was the view from the beach. The shoreline looks like white sand, but it is actually salt-encrusted mud. 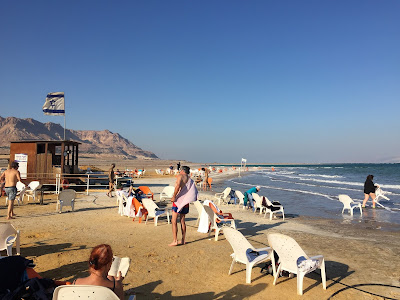 Check out the salt crystals caking the water walkways. I thought the salt would feel like slippery ice minus the cold, but it actually felt like pointy rocks. 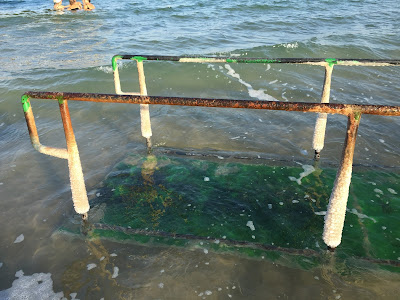 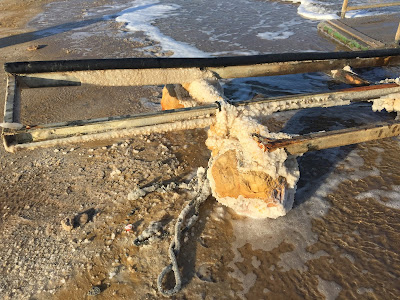 Our tour guide in Jerusalem had advised us to wear water shoes on the Dead Sea beach and in the water due to rough surfaces. At the last minute, I bought a pair at a gift shop and they were worth every penny/shekel. The salt formations at sea bottom were very sharp and jagged. Even with my water shoes on, I had to wade in slowly.

The seawater was pretty warm and sure enough, the saltwater made all the swimmers extremely buoyant. It was fun and a little weird to float around so effortlessly! We were warned not to get any saltwater in our eyes, so I was very careful. However, I did accidentally get some in my mouth and it tasted AWFUL - like a musty, sludgy salt slurry. Blech.

Later, I went to try the mud baths. The mud was cold to apply and obviously doesn't result in the most flattering image. I was terrified when I saw my own reflection. Do I look like one of those green women from Star Trek?
I waited for the mud to dry, then rinsed off/soaked in some of the hot sulfur showers. Ahhh, life is good!

Freakish appearances aside, the mud treatment worked wonders on my skin. Best natural skin exfoliate/softener, ever! I definitely understand the hype.

All too quickly, it was time to get dressed and make the trek back to Jerusalem.

--
And so finally ends all of my Israel travel recaps!
This vacation was one of the most impactful trips I've ever taken in my life. Even so, the week's explorations barely scratched the surface of all that Israel has to offer. There was so much more I would have loved to see had there been more time.

My sincere thanks and gratitude go out to all the people of Israel for their sincere warmth, hospitality, and kindness, and for treating us like family everywhere we went. Until the next time!
Posted by emmers712 at 5:00 AM