I signed up for the Rock N Roll San Antonio Half Marathon as the third of my 3-pack Tour Pass. When I later heard about that weekend's Remix Challenge (a 10K on Saturday and a half marathon on Sunday), it sounded like a good idea. If I'm going to pay all the travel costs to visit San Antonio for a half marathon, might as well throw in the 10K, right?

The good news: I finished both races healthy and with a smile on my face.
On the flip side, I don't think I will be attempting any challenges like that again in the future. Basically, I let my ambition win out over anything else.

Never say never, of course, because I didn't make the smartest decisions. Most notably, I didn't do anything to train for a back-to-back race series. I also ran the Saturday 10K at a harder effort than I should have. Doh!

But enough "woulda coulda shoulda." I'll talk about the 10K today, and will cover the half marathon in another post.

The 10K
On the first of a back-to-back race challenge, I knew it would be best to go conservative. I had every intention of running the 10K at a nice, easy pace. I figured I would try to finish just under 60 minutes.

The course was a point-to-point route starting at the Alamodome and finishing in front of the Alamo. This was the view from the start line: 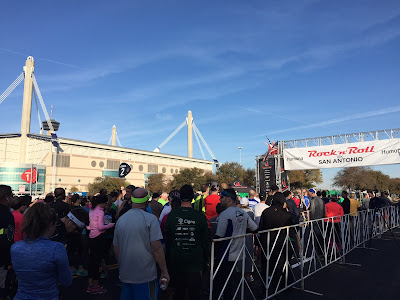 When I registered, I had given an estimated completion time of 58 minutes. Therefore, I was surprised to be seeded in Corral 2. Of course I went with it, but all the while I realized it had to have been a mistake!

I was further convinced of this when I learned Meb Keflezhigi would also be in Corral 2. He was pacing the 7:30 group (which, as we all know, is his version of a total snail's pace). Wow! In the below picture, that's him holding the yellow "Meb" sign: 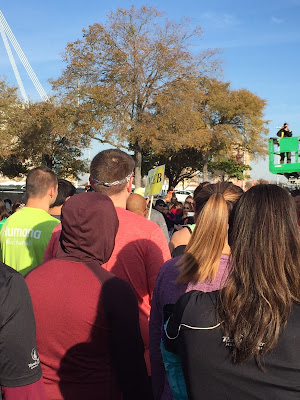 When Corral 2 got released, I did briefly try to keep pace with Meb. Obviously I didn't last long!

This also meant I came out of the gate much more quickly than originally planned. I told myself to slow down. To a certain extent, I did. But I still let myself get swept up in the roaring excitement of the crowd.


I ran with my phone in my hand, poised to take pictures; however, I didn't see a lot of noteworthy scenery. We went through some semi-industrial areas, followed by a few residential neighborhoods. There was a relatively sharp hill around mile 3.5, but otherwise the course was pretty flat.

Another runner pacing near me was stopping to greet every police officer along the route. What a great gesture! I decided to follow suit. I made it my focus to look for and thank every officer I could.

I tried to keep the pace steady. My left piriformis started alerting me of its presence around the halfway point, but I didn't want to slow down. My splits all fell between roughly 9:05 (the first mile) and 9:25 (Mile 4 with the hill).

The final stretch of the course went through downtown San Antonio. Here, the backdrop got more interesting. The crowd support rose dramatically in the final mile.

Check out this "perfectly-timed" snapshot of me nearing the finish: 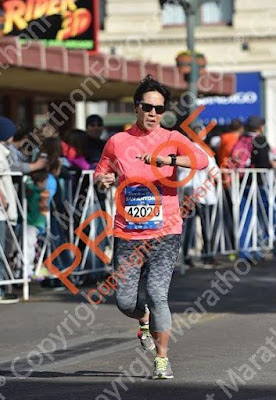 For photo purposes, I've learned to avoid dealing with my Garmin until well after clearing the finish line - but to get caught doing it beforehand!?!?!? Argh!!!

Here is a much better finish line snapshot: =D 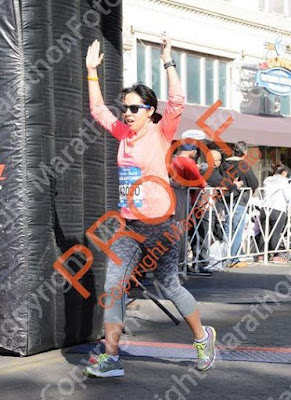 The finish line setting at Alamo Plaza was full of energy and festivity:


I already talked yesterday about my photo opp with Meb, which was awesome. It was by far the best moment of the post-race festival. I was also happy that my hotel was only a few blocks away from the finish, which made for a super-easy journey back.

Time to go see the city! I spent the rest of the day walking around and sightseeing (travel highlights available here). Explore now, rest legs later.

After dinner, I came back to the hotel and did what I could to prepare for the next morning. I spent the rest of the night stretching and foam-rolling in a valiant attempt to freshen my legs.

--
Linking up with Patty, Erika, and Marcia for Tuesdays on the Run. 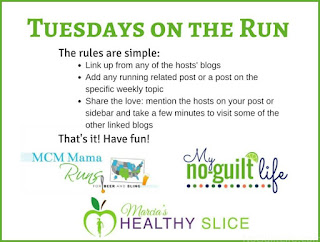