Last Thursday, thanks to the Windy City Bloggers Collective, I was part of a team of seven folks competing in the first-ever Nike Unlimited Chicago Decathlon.
NOTE: All forthcoming photos in this post are official event photos.

Here's a cool event photo of our team's pacer, Ervin, taking our photo: 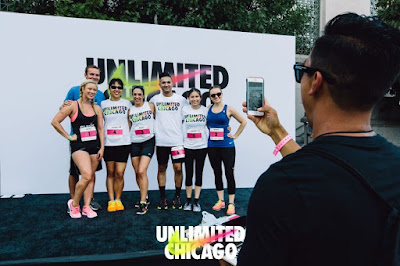 Nike Chicago was hosting the event inspired by USA Decathlete Ashton Eaton, who was competing in the Olympic Decathlon finals that same evening.

I wasn't sure what to expect from the event. I thought we'd be doing a decathlon-inspired group workout of some sort. Imagine my surprise when I arrived at Soldier Field on Thursday night and saw a plethora of decathlon stations set up around the grounds.

Nike Chicago was so generous to hand out sneakers to all of us, plus the white "Unlimited Chicago" event shirts that some of us were wearing. After donning our gear, we gathered with the crowd of attendees to receive instructions. We learned that we would indeed be competing in ten different track and field events that night. Each team would submit the two best results for each event by gender, and the results would be assigned point values on a per-team basis.
Some of the events were actual decathlon events, whereas a few events were being modified or substituted for practical reasons. In case anyone is curious, the listing of ten official decathlon events is available here. Comparatively, here are the ten events we underwent that night:
Since it would be overkill to try to talk about all 10 events in a single post, I'm going to split this recap into two separate posts where I cover 5 events in each. Here are the first five:

1. 100 Meter Sprint
After watching Usain Bolt and the other Olympians complete the 100-meter sprint in less than 10 seconds a few days earlier, I had been wondering how long it might take an average person to run. (My guess was 20-25 seconds.) Now was my chance to find out!

We ran a series of heats with four other teams, where each team sent one person to compete at a time. Ali was the brave soul from our team who elected to race in the very first heat of the entire night. Here is a picture of him (he is the runner farthest to the right): 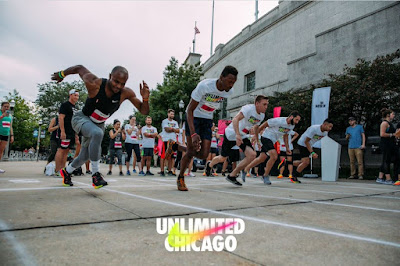 The sprints were supposed to be chip-timed. Unfortunately, the event organizers experienced some technical issues, so we didn't realize until afterwards that the first heat didn't get timed. Poor Ali ended up having to do the sprint twice! He did take several minutes to recover in between his two heats, but even so - that must have been brutal.

I was very nervous going into my heat. I hadn't fueled properly, hadn't warmed up, and had taken a Strength Max class less than 90 minutes earlier - so I knew I had some handicaps coming in.

Despite the short distance, my plan was to try a negative-split-type strategy. It was harder than anticipated to get momentum going at the start, and made me realize the importance of the spikes and blocks that sprinters use! Then, about halfway through, my hamstrings started screaming bloody murder at me. It was killer.

I did my best to push through and finished in 16 seconds flat. Not too bad, but definitely could have been better with more adequate preparation.

2. Standing long jump
Each of us was measured on the closest distance between any part of our body touching the ground versus the point of our jump. Each attendee had two attempts.

Here's a sample picture from the long jump station: 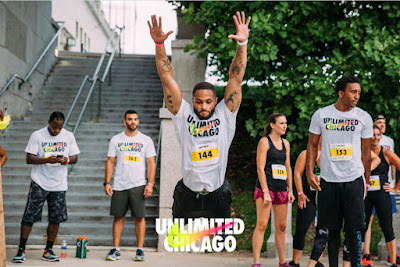 The jump was a lot harder to do than it looked. Many folks, myself included, ended up taking a step backwards after our jump. As such, we were instructed to try to fall forwards, which was also difficult.

I don't remember my exact long jump results, but I think it was somewhere around 6 feet.

3. Shot put
We used shot puts of different weights for the men and the women. Assuming the shot puts were regulation weights, the men's was 16 pounds and the women's was 8.8 pounds. A Nike staffer demonstrated suggested proper form to us, including how to hold the shot put, how to step off with our feet, and how to release. He emphasized that we should try to use our core muscles instead of our arm/shoulder muscles on the release.

Here's a sample picture from the shot put station: 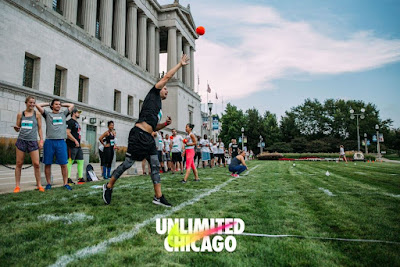 This was my first time ever throwing a shot put. It was much more slippery than I expected, and was tough to get a grip on it. I also found it tricky trying to get the footwork down.

Each of us rotated as many attempts as we could during our allotted time. I tried twice. Unfortunately I don't remember what my result was. However, I think this is definitely an event in which some extra practice would have been very beneficial to get the proper form down.

4. Vertical jump
The event organizers had a electronic pad that we stood on, which measured our vertical leap electronically. Here's a sample picture: 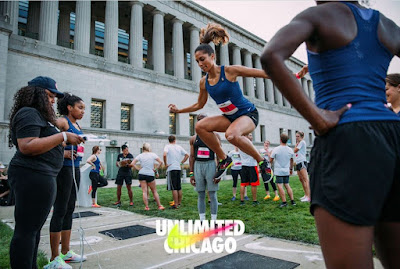 I figured the machine would track the highest distance that any body part reached, so I assumed we should try to bend our knees during the jump. However, a Nike staffer indicated that knee bends were not beneficial, and that we should just jump with straight legs.

We were given one practice jump, then two recorded attempts. On my practice jump, I ended up landing off balance and stepping off the pad, which skewed my results. On my recorded attempts, I decided to attempt one jump with a knee bend and one without. Sure enough, my jump without bending my knees resulted in a better result - but again, I don't remember my exact results here.

5. 400 meter run
By the time we got to the 400 meter run, I was already feeling fatigued both mentally and physically. I couldn't believe we weren't even halfway through the night's events yet. My hamstrings were barking voraciously at me so I was very apprehensive about doing another sprint-type event.

I don't think the event photographers shared any action photos from the 400-meter event, so here's another snapshot from the 100-meter (you get the idea): 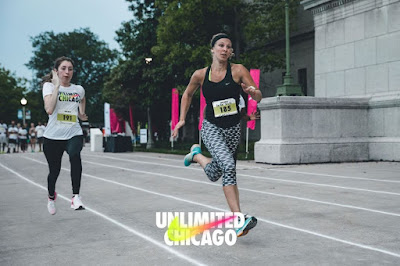 A Nike staffer gave us some suggested strategy. She said the 400 meter run was her favorite event from when she ran track, and described it as being a "long sprint." Her instructions were essentially to make sure we didn't start out too fast, and then to push harder and harder with each subsequent 100 meters we passed.

Being a true believer in the negative split strategy, I followed this guidance as best as I could. Shortly after the start, I was alarmed to be in last place in my heat. Then, as the distance progressed, I sped up and did manage to overtake several others before I finished.

Based on the top speed at which I thought I could run one mile (around 7:30?), I thought maybe I'd finish around 1:40. I ended up finishing in 1:25, which I was pretty happy with. Again, it definitely could have been better with more adequate preparation.

Five events down, five to go! To be continued.