Taking a break from the Alaska travel recaps to talk about some random buzz in Chicago today.

Congratulations to the Chicago Cubs on winning the 2016 World Series! A 108-year championship drought has been broken, just like that! They made it look easy, right? ;-) It's hard for me to comprehend the magnitude of what just happened. I am very happy for the team, the city, and all the fans who thought they might never see this day, including the millions that never did.

I can only imagine the partying that is surely still going on as I type this more than 12 hours after the final out. This guy's face just says it all: 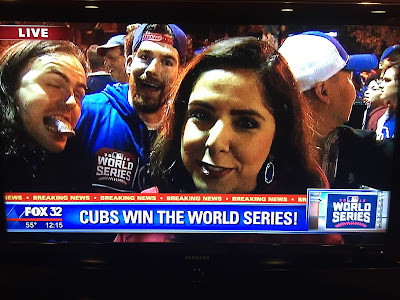 In all seriousness, it was like Independence Day in Chicago last night. Car horns were blaring, people were cheering at the top of their lungs, fireworks were lighting up the sky in every direction (even the south side, which is traditionally White Sox territory!) One of my colleagues lives a mile away from Wrigley Field and she said folks were spontaneously firing M80s. That'll get the temporary hearing loss going for sure. 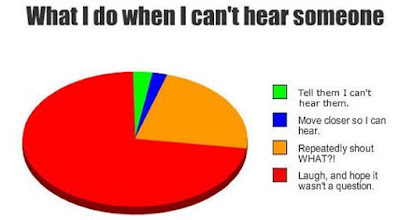 I just learned the championship parade will occur tomorrow, very appropriately. The rest of this workweek is pretty much already shot anyways. Might as well keep the celebration going to kick off the weekend in style, right?

Speaking of the weekend...

ILL-INI!!!
This Saturday, I'm headed down to my dear alma mater (the University of Illinois at Urbana-Champaign) with Adam and my brother-in-law, Marc. My nephew, Reid, is a junior on campus and this weekend is Dad's Day Weekend.

I haven't been back to campus in two and a half years so I am very excited for this day! The weather forecast looks absolutely perfect for an early-November game. I'm already scheming to load up on Illinois gear, and to go take photos at various iconic spots on campus.
Adam and I are planning to catch the Illinois-MSU football game. 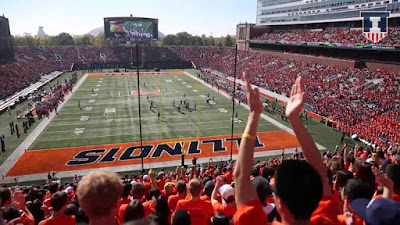 Afterwards, we'll join the gang for a Dad's Day gathering at Reid's fraternity house. Ahhh yes, this means I'll be on campus partying on a Saturday night!!!! ;-P Obviously it won't be the same as when I was a student, but it'll be fun to evoke some of the old memories.

Side note: My friend Nhan is an MSU alum and diehard fan. He's also journeying to UIllinois on Saturday for the game. Traveling MSU fans are typically extremely passionate, so I requested he not go overboard with his Spartan shenanigans on my old campus. His [edited] response was basically, "Have a camera ready!"

America's Playground
Rock N Roll Las Vegas is next weekend! I've been looking forward to this race for months, and it's finally almost here! Plans are slowly starting to shape up for the weekend's dining and entertainment choices.

My flight is on Thursday night, and of course my calendar is a complete disaster that afternoon. It'll be quite the mad dash leading up to departure. 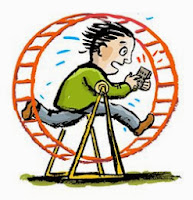 I'm starting to research all the logistics of getting to/from the race expo, the start line, and the finish line. I'm trying not to get stressed since this is supposed to be fun, but the transit process is going to be lengthy and cumbersome. Hopefully nothing explodes or catches on fire, etc.
From where I'm staying at the Mirage, it's about 2.5 miles to the start line south of Mandalay Bay. I know the Strip is notoriously difficult to walk because of all the bridge crossings that lead into casinos, et al. Everyone is recommending using the monorail, but it's still a long walk just to get to the monorail. Then, the word on the street is that it's about a 1-mile walk from the monorail at MGM to the starting line. Plus, I hear the monorail gets jam-packed during the pre-race rush, so you have to allow a LOT of time.
To make matters worse, gear check closes almost an hour before my wave is scheduled to start. If the weather isn't bad, this won't be a big issue - but if it gets cold, that's a long time to be standing around waiting. Looks like I need to pull together some throwaway clothes, plus bring along some food/drink. All in all it sounds like the pre-race process could end up being an adventure all by itself.

What plans do you have for the upcoming weekend? Favorite parades? Any races in the horizon? Las Vegas tips or suggestions?
Posted by emmers712 at 1:05 PM