I had a very nice, relaxing weekend this past weekend. After a hectic few weeks, with more craziness to come over the next couple of months, it felt really good to get organized. I watched lots of TV, knocked out a few house projects, and whirled through at least five loads of laundry.
I realized I'm behind one week again on sharing my workouts, so here are the last two weeks:

In addition to all the cleaning and organizing fun, I attended two fun really events this past weekend.

On Friday night, Adam and I went to Tony and Tina's Wedding. If you're not familiar, it's an off-Broadway event based on a traditional (stereotypical) Italian-American wedding and reception. The audience members are the wedding guests and are treated as though everyone has known each other for years.
When Adam and I arrived, we gave our names and Adam introduced himself as "Emily's husband." Throughout the rest of the evening, the wedding party jovially called Adam "Emily's husband" without missing a beat. At some point, they shortened it to the initials and began calling him "EH" (pronounced "Ay", rhyming with "hey"). It was hilarious!!!

Many years ago, I had attended a production of Tony and Tina's wedding when both the ceremony and reception were held in Piper's Alley. Now, the ceremony takes place at a real church, with the reception held a few blocks away at a banquet hall, complete with food and drinks. The venues really added to the authenticity of the event! 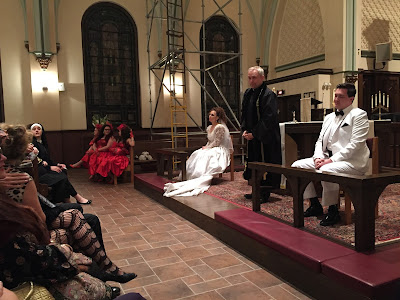 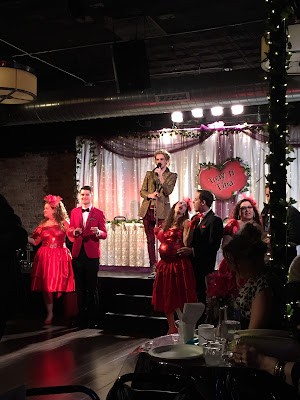 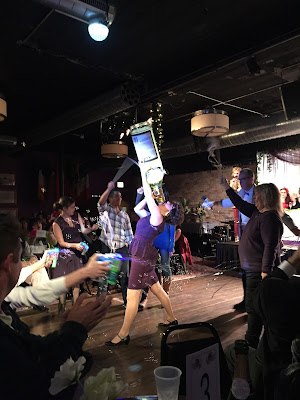 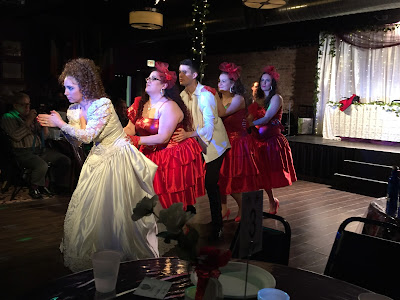 At a lot of weddings, the guests might be shy about getting out onto the dance floor. Not this night! Almost everyone was rocking it out to the chicken dance, the YMCA, the conga line, you name it. 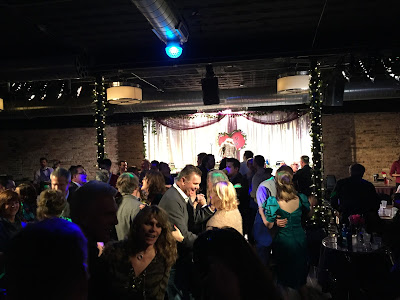 I had a blast at the event, had so much fun interacting with the wedding party, and couldn't stop laughing at all the attention to details. One of my favorites was a wedding party family member who was sporting a tattoo that said, "He loved me first." Too funny. What a great celebration!!!

I told Adam afterwards that I had a sudden yearning to watch The Godfather so I could see all the Italian correlations. =)

And speaking of fantasmic immersions...

Yesterday, I attended an AquaMermaid Chicago swimming class with Erin. As the name implies, this is a class where you learn how to swim like a fish using both legs as a fish tail and using your core muscles to propel forward.
I wasn't sure what to expect from the class. However, I've been starting to tire of my usual running, lifting/yoga routine, so the mermaid swimming ended up being a really unique and surprisingly fun challenge. It was a great way to shake up the routine (both literally and figuratively!)

During class, we learned how to swim forwards and backwards, practiced swimming through hoops, attempted forward/backwards somersaults both individually and in tandem, and did handstands (tailstands?), tail high-fives, and tail waves. It was quite a workout for both the core and the arms! It was also fun to watch my fellow students doing their moves - the somersaults look really graceful and beautiful with the tail.

The instructors took some underwater photos of everyone which aren't yet available for me to share. In the meantime, here is another photo of Erin and me goofing off on the deck: 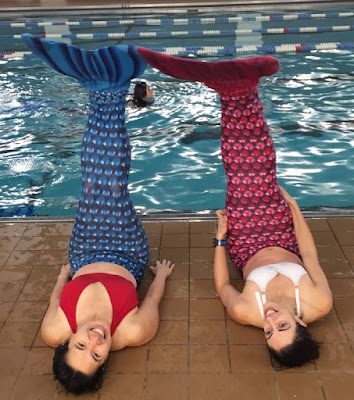 In the future I am going to pay more attention to the swimming technique of dolphins and other fish! If I ever watch The Little Mermaid again, I'm also going to take note of Ariel's skills. =)
Coming up this week...
I'm looking forward to a short workweek and three quiet days in the office. On Wednesday night, Adam and I are headed to Pittsburgh for Thanksgiving. I'm running the PNC YMCA Turkey Trot on Thanksgiving Day, which is my final race of the year (thank goodness!) 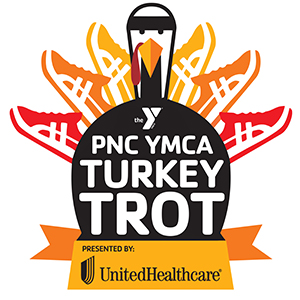 I'll be attending one of Adam's high school reunions with him on Friday night. Then next weekend, we'll be jaunting to Maryland to attend the wedding of Adam's cousin, Matthew. (Unlike Tony and Tina's wedding, Matthew's wedding will not be a comedic theatrical production =) ).

How about you? How was your weekend and what plans do you have for the upcoming week?

----
Linking up with HoHo and Tricia for the Weekly Wrap. 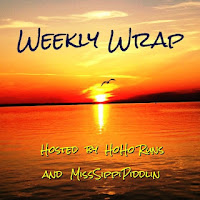