Since I've been out of town, I'm a few days late for one of Maggie's Weekly Runner Photo Challenges.  However, the topic (below) was so intriguing that I'm posting a response for it anyways.


It's not a coincidence that my medal from that race is being modeled by a giant penguin.  The weather conditions on May 15, 2011, were suited more towards penguins.  The winds were brutal, coming at us at 30-40 MPH.  Unfortunately, the course was right on the lakefront so there was nothing to blunt the force of those winds.  The temperatures were the 30s and it was raining/sleeting sideways.  It stung my eyes so much that I was literally trying to run hunched over 90 degrees.  It was hard just to walk, let alone run.


At the time I didn't know much about fueling during races.  I'd never really heard of GU or Shotbloks or any of that stuff.  I ran the entire half marathon just on water and a cup or two of Gatorade.  Needless to say, I wasn't feeling very good during the latter half of the race.

Add to these brutal conditions that my left knee had been bothering me for several weeks leading up to the race.  I had gone in to get an injury screening a few days in advance to assess whether or not I was healthy enough even to run.  I did get clearance, but was told to be cautious and to stop or slow down if it hurt.  However, as it turned out, I was so cold and wet during the race that my legs were too numb to feel any pain.  In retrospect, this was probably not a good thing because afterwards I was sidelined for almost four months rehabbing my knee. 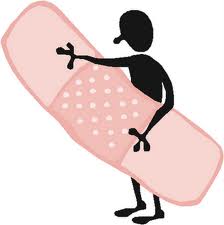 They say that whatever doesn't kill you makes you stronger, right?  In short, the aftermath of this race in combination with my knee injury taught me a heck of a lot about my body's limitations.  It taught me the importance of proper fueling, stretching, and working on ironing out those muscle imbalances.  Most importantly, it taught me that I am not a machine and shouldn't train like one.

Although, this is pretty cool: