Yesterday morning I set out before dawn to accomplish another personal distance record. I ran the CARA Ready to Run 20-Miler. It also marked the longest run in my training plan prior to the Chicago Marathon on October 7.

Going into the run, I felt pretty confident. After doing the miserable 18-miler in North Carolina two weekends prior amidst searing heat and humidity, I knew this wouldn't be nearly as grueling. However, I had started feeling some groin pain during the Chicago Half Marathon last weekend. It had persisted all week, leading me to forgo one of my weekday training runs (sorry, Erin) in the hopes that it would dissipate. Come yesterday morning, it was nearly undetectable while walking. However, I was concerned how it would respond to 20 miles of running.
﻿

As usual, the 5:15 AM wakeup call followed by a big bowl of cereal and a couple big glasses of water and orange juice. While getting dressed, and per the suggestions of my fellow bloggers, I put BodyGlide on the hotspots on my feet. I also caked about 3 inches of BodyGlide onto my thighs and other areas.


Once again, Adam voluntarily got up at another ungodly hour of a weekend morning to graciously drive me to the starting site (THANK YOU!!!!!).  There was a surprising amount of traffic at that hour (probably all the other marathoners-in-training that were also headed to the run).

Since this run was considered a fully-supported training run and not a race, it was not being chip-timed. However, we were all assigned to pace groups. Adam had picked up my race packet for me and informed me that I had been placed in pace group #2, starting at 6:30:30 AM (the run started at 6:30 AM). I had thought for certain this was a mistake, as usually only the super-elite runners get such early starting groups. This had me visualizing myself getting run over on the course, with running shoe footprints embedded into my back.

I had emailed CARA to ask that I be placed in a slower (MUCH slower) pace group. Much to my surprise, they indicated that pace group #2 was for the 11:30 run-walkers, which was actually correct for me. Allrighty, then! This would probably be the only time ever in my life that I'd get to start a run at the front of the pack. So I enjoyed it!

Things were pretty uneventful for the first few hours. The temperature was in the low 60s and the sun was rising over the horizon as we were underway. My pace group was fairly quiet, with the exception of two guys who were chatting about their running experiences. I chatted a bit with one of the leaders and with another woman named Julie, who was training for her fourth marathon. She shared stories about running the San Diego Marathon, where they have uniformed Marine soldiers run with you during the last mile to the finish line. How awesome!

Unfortunately, my groin was aching almost within just a couple miles of starting. It wasn't too bad at first, but the aching slowly kept getting stronger and stronger. I kept praying that it would hold up. I was very fearful that I'd experience an explosion of pain at some point. I tried to keep my footsteps as light as possible to reduce the shock of impact.


The members of my pace group gradually started falling back. I wanted to stay with the pace group leaders as long as I could.  Up until about mile 14 I was able to, although it began to take more and more effort to do so. Finally around mile 14 I decided to just continue at my own pace. But I think I was one of the last one or two group members to fall behind.
My groin pain was still increasing, but the miles were counting down. I kept telling myself that in training it didn't matter how long it took to cover the distance, just that I covered it.  I also kept telling myself that after today, I would have three weeks of taper time to focus on rehabbing.  The last few miles I began walking more and more just to alleviate some of the aching. I was tired, but the aching was actually more prevalent than my fatigue.

We reached Promontory Point at about 55th Street, and had a northern view of the city skyline. It gave us some perspective on how much distance we had covered.


Almost throughout the entire run, my Garmin had said that my distance covered was anywhere from 0.08 miles to 0.13 miles higher than what the course mile markers indicated.  When my Garmin beeped at 20 miles, it was kind of hard to believe.  It felt great crossing the finish line shortly afterwards.  What a relief!

The next three weeks will include reduced (i.e. "tapered") mileage before the final push on October 7th.  I'd never heard such welcome words as I did on the bus ride home, where one of the CARA leaders told us, "Welcome to your taper!"

Barring my injury issues, I do feel like I am capable of adding 6.2 more miles to what I just accomplished.  And now the huge focus is physical therapy.  During these next three weeks, I plan to up my yoga workouts to three times a week or more.  I also plan to do tons and tons of squats and lunges, as well as foam roll like my life depends on it (which, at this very point, it does). 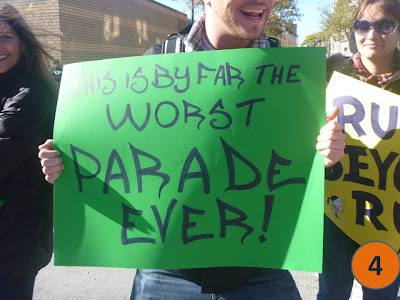