It was an absolutely gorgeous morning in Chicago to be running the PAWS Run For Their Lives 8K.

My stubbornly lingering groin pain had persisted this past week.  My biggest fear was that I would sustain an injury just two weeks out from the Chicago Marathon.  Therefore, I went into this race debating whether I would "race" it.  I was also debating whether I should even run the 8K or drop down to the 4K walk, just to be safe.  I decided that it would be a race-time decision.

The race had a very friendly 9:00 AM starting time this morning.  Adam dropped me off near the starting line, then went to go find parking nearby.  Packet pickup and gear check were a breeze, and there were no lines at any of the portapotties, either.  AWESOME.

People were welcomed to bring their pets along for the race festivities, which included a costume contest, agility course, and pet massages.  Therefore, it was also awesome to see so many adorable, energetic, wriggling dogs of all shapes, sizes and colors, many adorned in cute costumes. 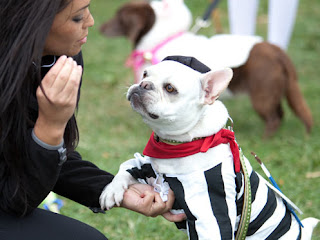 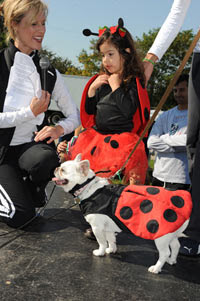 I did about 15 minutes of easy jogging to warm up.  Then I took a GU and headed towards the starting line.  I was feeling pretty good and my achy groin seemed to be holding up allright.  So I decided that I would go ahead and try to "race" the race, but would slow down if I needed to.

Adam found me near the starting line, and hung out with me until the race began.  I've grown accustomed to the enormous races where the starting line is too crowded for any spectators to wait with you, so this was a very welcome occurrence.

Here's a picture of me waiting to start.  Notice some of the dogs in the background? 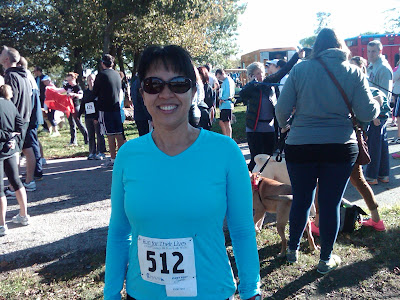 The airhorn blew and off we went.  I had positioned myself near the back of the pack, as usual.  I was surprised at how many people I was passing at the start, though.  It made me wonder if I'd gone out too quickly.

Our race packets had included maps of both the 8K course and the 4K walk.  Before starting, I had very quickly glanced at the first map I saw, which indicated that the course was an out-and-back starting northbound on the lakefront path.  I had also heard another runner describing the northern route.  So I was surprised when we started running southbound on the path instead (I later realized that I had been looking at the 4K walk map).  In the meantime, though, I had no idea how far south we were going, at what point we were going to turn around, or where any aid stations were located.  Oops.

I kept trying to push myself at a comfortably hard pace.  I walked through a water station around mile 1.7.  By around mile 2.25, my lungs were starting to feel it and my groin was beginning to feel tight.  I wasn't enjoying the exertion and was starting to wonder why I did things like this "for fun."  I started telling myself that after this was over, I would never run another race again.


Rather abruptly, I reached the turnaround at the southernmost point of the course.  I tried to make the turnaround as tightly as possible.  In doing so, I nearly lost my balance, twisting my ankle in the process.  Oops again.  Thankfully no harm done.

I reached an intersection where course marshalls were shouting for runners from some other race to turn left.  Apparently there were multiple races going on at the same time along the lakefront path, although I only saw PAWS runners.  I pushed on, selecting random runners that were ahead of me and making it my goal to pass him or her, then selecting another runner to try to pass, etc.


We came back to the same aid station we'd passed on the outbound trip.  I walked through and grabbed some water, then had a little trouble getting my pace back up again afterwards.  But shortly after passing the mile 4 marker, I glanced at my Garmin and saw my time was at 36-something minutes.  Not bad!  Maybe I'd be able to finish between 45 and 46 minutes?

I could feel blisters forming on my feet and the sun was shining right in my eyes.  The distance on my Garmin was off, but we were approaching familiar territory so I knew we were getting close.  I kept pushing at a comfortably hard pace, figuring that once the finish line was in sight that I could really gun it.  Then all of a sudden we turned a corner and I was startled to see the finish line less than a tenth of a mile away.  I gunned what I could of the remaining distance, during which I saw Adam near the finish line and waved at him before crossing.

According to results posted near the finish line, my time was 44:12.  Much, MUCH better than I had been expecting!  (And I quickly changed my mind about wanting to run races again.  =) )


While waiting in line to view the results, they announced that any dogs wearing yellow bandanas were ones that were in need of good homes.  They said if anyone was looking to adopt a dog today, or was looking to bring home a second or third dog, to please consider one of the dogs that were there.  Hearing this and then noticing many dogs wearing the yellow bandanas immediately brought tears to my eyes.  I used to volunteer for an animal shelter, so this really hit home.  I am not running the Chicago Marathon on behalf of any charitable causes, but now I understand how meaningful it would be to do so for a cause that you care about.

I was very happy to have run this race, especially given the easy, worry-free logistics.  I had donated some extra funds in addition to my registration fee, and was glad I did.  In the end, I had a really great time at this race and would definitely run this race again if for nothing but the cause.
﻿

Some other training notes: