Ahhh, my running shoe collection, and also the subject of this week's Runner Photo Challenge.  Running shoes are a big weakness for me because I love experimenting with different gear in general, plus different styles and colors.  I've always said that I am never more motivated to go running than when I have a new pair of running shoes that I want to take for an inaugural run! 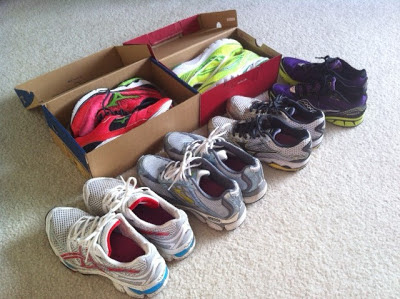 I most certainly don't need this many pairs of running shoes, considering the mileage that I run.  At my current mileage pace, it would take me a good three years to get through all of these pairs of shoes!  So the morale of the story is that I really, really, REALLY need to stop buying more running shoes.  At least this year.