I need a vacation.  I desperately need to hit the reset button and reboot myself.

In this week's edition of Take Time Tuesday, I continue to be so grateful for all of my friends and family who unconditionally believe in me, support me, and always want the best for me.

From the family side, Adam always gets a lot of mention.  Additionally, I am especially grateful for all three sets of my parents.  This week, very special mentions go out to my mom as well as to Adam's mom and Adam's dad.

From the friends side, very special mentions go out this week to two of my amazing friends.  First, my friend, Vanitha: 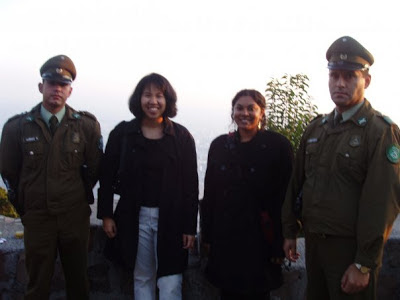 This is a old picture of Vanitha and me in Santiago, Chile, hanging out with some of the locals.  =)

Then, my friend, Ed: 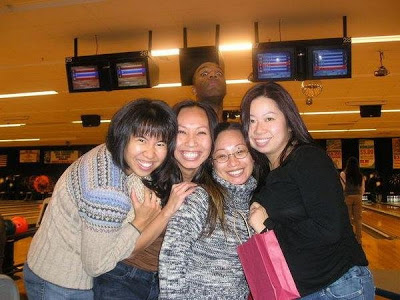 This is another old picture of (from L to R): me, Myhien, Soo, and Elizabeth in the front row.  Ed is the photobomber in the background.  =)

The folks I've mentioned here are scattered from Maryland to Pittsburgh to Atlanta to Long Beach.  I am incredibly grateful that time and distance do not matter with any of them.

OK!  Let's talk NHL second-round playoff predictions.  Given that the first round just ended last night, I am rushed in writing my predictions before the second round starts tonight!  By the way, I am certainly no hockey expert by any stretch of the imagination, but I am proud to say that I went 7-1 overall in my first-round predictions.  (Adam went 8-0!)

#1 Chicago Blackhawks vs #7 Detroit Red Wings
I am very excited for this final match-up between these two long-time Original Six archrivals before Detroit moves to the Eastern Conference next year.  It is going to be a great series, with both of these teams being all-around talented, skillful, puck-possession clubs.

Detroit just came off a tough series with Anaheim, and their team is heavily experienced but also considered to be getting towards their latter years.  The Hawks are coming off a long break in action after quickly ending their first-round series against the Wild.  While the rest is good for the Hawks, you do worry about potential losses in momentum.

In the end, both teams are stacked but the Hawks outstack the Wings in every category.  And no, I'm not biased or anything.  Ever.

#5 Los Angeles Kings vs #6 San Jose Sharks
This is a tough one for me.  A really, really tough one.

San Jose is coming off of a stunning sweep of the Vancouver Canucks in the first round, so they've got winning momentum offset by a very long break in games.  However, the Sharks as a team can be very hot or cold.  They also have a history of not being able to make it very far in the playoffs.   However, the Sharks do have my favorite goaltender of all time, former Blackhawk Antti Niemi.

Comparatively, Los Angeles took a beating in their brutally physical first-round series against the St. Louis Blues in the first-round.  During the regular season they were dealing with injury aftereffects on goalie Jonathan Quick.  The Stanley Cup hangover effect may eventually manifest itself on the Kings, too.

I'm not a betting woman, but:

Check out this NHL Fan Map, which breaks down hockey fans geographically by team.  This is obviously an older map, since the Atlanta Thrashers have since moved to Winnipeg and become the Jets.  Even so, the map is pretty cool, eh? 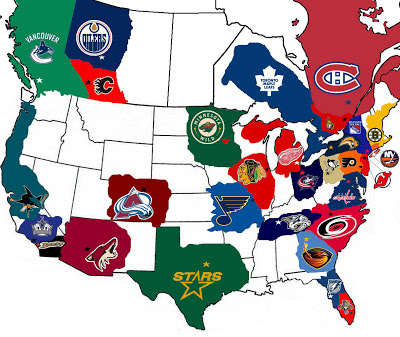 NOTE: Geographic size definitely does not equate to fan intensity.

#1 Pittsburgh Penguins vs #7 Ottawa Senators
Pittsburgh had some scary moments in their first round series against the New York Islanders.  They were very fortunate to pull through and they need to make some changes if they want to keep winning.  The Penguins were very hot and cold in the first round, and it seemed like they took a step back when Sidney Crosby returned from injury.  Some questions lie on the table with regards to Pens goalies Marc-Andre Fleury and Tomas Vokoun and who will get the nod in goal.  Unfortunately it's not a good time to be experimenting.  However, I fully expect that the Penguins will get back to their usual stellar form in the second-round.

I don't know much about Ottawa.  However, I was impressed by how well they've managed to keep it together despite injuries to some very key players over the course of the season.  From what I saw, the Senators looked strong in their first round against the Montreal Canadiens.  In the end, though, I think the Penguins easily outmatch the Senators on natural talent.

#4 Boston Bruins vs #6 New York Rangers
Talk about scary moments, Boston had some heart-attack inducing moments in their first round series against the Toronto Maple Leafs.  Boston had a 3 games to 1 lead in the series, only to end up in game 7 down three goals with ten minutes left in regulation.  How they were able to come back and tie it up, and then eventually win the game and the series in overtime?  It is beyond me.  You have to give Boston a ton of credit for their resilience.  The question is, can they keep it up against a strong, physical team like the New York Rangers with stellar goaltending in Henrik Lundqvist?

As with the Hawks/Wings, the Bruins and Rangers have a long and storied history as Original 6 rivals.  It is going to be fun to see how this one shakes out.  I expect it will be a tough, physical, low-scoring series which will ardently display the talent of each team's goaltenders.  This is another tough decision, but I'm going with:

--
And since no NHL playoff prediction blog from me would be complete without a great Blackhawks picture, here is one of my favorites: