I've seen many bloggers partaking in "Three Things Thursday" so here is a contribution to the fun!

Discovering Great Fruit Species (this sounds much more scientific than it really is)
Whenever I go to the grocery store, I usually try to buy at least one new-to-me item every time.  (I try my best for this to be a new type of produce, but often it ends up being a new type of snack food.)  Through this process, a few months ago I realized the awesomeness that is Ambrosia apples.  Now I think that no other apple species even comes close to comparing.

I had another produce-sampling win yesterday!  I brought home a bag of Rainier cherries and I just love them.  Within less than 18 hours I've nearly finished the entire bag all by myself.

Here's where it gets interesting.  You saw the picture of ambrosia apples above, now check out this picture of Rainier cherries:

The resemblance is uncanny!  The Ambrosia apples look just like Rainier cherries without stems, and vice versa.  Coincidence?!?!?

Maybe the produce world is signaling me to seek out all produce species that have this red/yellow blend of coloring (e.g. certain types of heirloom tomatoes, perhaps?) for guaranteed likage!  Now I am on a mission.  =)

Lemon Shoes?
In prior discussions of my running shoe collection, I've mentioned that I have a pair of Brooks Glycerin 8 shoes which I'm not thrilled with.

Given the rave reviews I've heard about the Glycerin series and about Brooks shoes in general, I am really surprised at myself for not liking them very much.  I think they are pretty but they are not supportive enough for my liking.  It makes me wonder if I got a lemony pair?

I've been trying to salvage them by wearing them just for shorter runs.  They've got about 140 miles on them right now, so they shouldn't be anywhere close to being worn out yet. But the last time I wore them, they felt disturbingly bone-jarring.  Now I have very little desire to wear them for any more running.  So this pair of shoes is probably going to set a new personal mark for my lowest-mileage downgrade/retirement.

Adventures in Volunteering
My new company has quite the interesting volunteer opportunities available.  Most notably, they are looking for employees and their friends/family to volunteer to work concessions at various Soldier Field events. ("Working concessions" happens to mean serving and selling alcohol, so they are looking for folks over age 21, of course.) Examples include a Bon Jovi concert, a Justin Timberlake/Jay Z concert, a Taylor Swift concert, and all Bears home games.  A percentage of the concession stand sales go to charitable causes.

I am intrigued by this type of volunteer opportunity.  I've never been to a Bears home game, and based on my experience at other sporting events I am sure it would have a really fun atmosphere (especially when the transfer of alcohol is involved).

The drawback is that the volunteer shifts are lengthy.  We are talking 9 AM to 4 PM for a Sunday afternoon game.  That is a bit longer than I necessarily want to be on my feet on a weekend day.

Here's another concession stand that agrees: 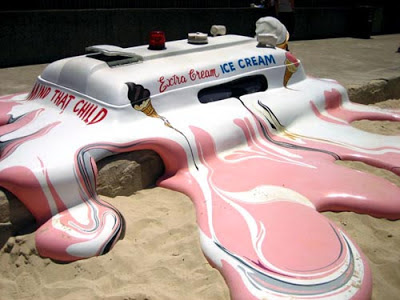 (The good thing is that most Bears games take place in cooler climates, so there is less potential for melting.)

I'll be giving this volunteer opportunity some consideration in the coming months.

SIDE NOTE:
I asked Adam if he would potentially be interested in volunteering with me if I did go for it. This a lot to ask of him given how much he relishes his football Sundays. He said he would consider it during the Steelers' bye week... but that he couldn't promise that he would/could keep his Steelers loyalties on the down low while at the premises.

I wonder how the organizing group would feel about this.  I mean, a volunteer is still a volunteer, right?  ;-)
Posted by emmers712 at 5:44 PM