It's funny, though. The more and more I run these races these days, the less effort I put into training for them and the less that I care about performance.

However, I do still like adding to my medal collection. And since I ran both the Allstate Chicago 13.1 Marathon back in June as well as the Chicago Half Marathon yesterday, I earned an extra medal for completing the "Windy City Challenge." Excellent! 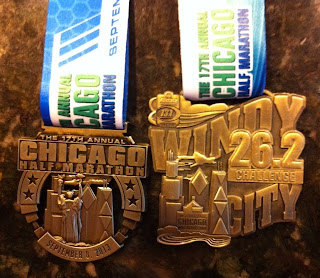 Pre-race I met up with some bloggers at Sara's Run for HD tent. Many thanks to Sara for hosting us there!


Now, onto the race itself.  Let's go with "the good, the bad, and the ugly"-type race recap today.

The Bad
The Ugly

Final Thoughts and What's Next
I did enjoy this race, the atmosphere, the views of the lake, and the energy of the crowd and the volunteers. But I won't kid you that I am sore today and walking more slowly than usual. Basically I am reminded yet again that the half marathon distance should not be taken lightly. And oh my god, I still have two more of them to run this year, including what is supposed to be a PR attempt for my next half marathon in five weeks.