Erin recently posted about some unique fitness class options. It got me thinking about the various fitness classes that I've been wanting to try, as well as other items on my fitness wish list.

I've heard these described as "pilates meets yoga meets body-sculpting." Many folks have raved about these classes for very fast results and for being an efficient workout where you don't sweat.

I took ballet as a young child for a few years and wasn't very good at it. But I am intrigued by the possible benefits of any low-impact workout that targets your core and arms.

From what I've seen, barre classes in Chicago do not come cheap. Some of the studios I researched don't even publish their prices online (which is never a good sign). But for the most part it looks like drop-in class prices start at around $20 per class, and monthly packages start around $200 per month. That's a serious chunk of change.

I've been stalking Groupon, Living Social, and Gilt City for deals on barre classes. So far, no go except for classes located in far-away suburbs. Thy deal stalking shalt continue. Maybe as it gets closer to the holidays some bargains will pop up? 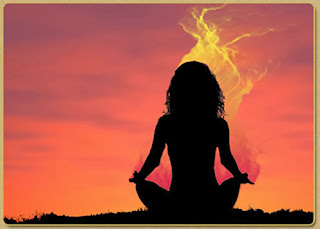 Yoga classes taken in studios heated to around 105 degrees Fahrenheit (whew!) People claim that it provides injury-healing and toxin-flushing benefits, and that it enhances flexibility more effectively than traditional yoga. I have several friends who SWEAR by it.

I do like yoga, mostly just because it always feels nice to get a good muscle-stretching. But I definitely don't share the same intense passion for yoga as many friends. Therefore, while I do want to try bikram yoga, admittedly I haven't been as focused on looking for opportunities to do it as I have been for barre.

On that note, though, bikram yoga also does not appear to come cheap. It looks like classes in Chicago start around $15 - $20, with monthly packages around $150 and up. Thou shalt also stalk Groupon, Living Social, or Gilt City deals for thy bikram yoga deals.

Runner's ID
I used to go running without carrying any sort of identification. SO BAD, I know. Now, I do make a point of trying to put my driver's license in my pocket whenever I go running (although admittedly I still don't always remember to do so).

The problem is that when I get back from a long run, usually the only thing on my mind is refueling and taking a shower. In doing so, I will usually just throw all of my running clothes directly into the hamper... with my driver's license still zipped up securely in my jacket pocket. This has resulted in a few incidents where I've left the house to go run errands (sometimes with my car), and then realized that I forgot to put my driver's license back in my wallet.

You better believe that when this has happened, I've taken every precaution to make sure I don't get pulled over by one of Chicago's finest.

I can just picture the conversation now:

Me: Uh, sorry officer. I went for a run this morning and put my driver's license in my running jacket. Then I forgot to put it back afterwards. So it's in the washing machine right now. Or it might actually be in the dryer, hopefully it didn't melt. But I can give you my proof of registration and insurance!

Police officer: Have you been drinking?

Me: No sir. Well, not unless you count drinking water and powdered Gatorade. I drank them both together and apart, since you can't really drink powdered Gatorade unless it has water in it. I didn't drink a lot of Gatorade, though, because too much of it gives me stomach issues. I do need electrolytes, though. So instead, I took some salt capsules. But anyways, I did my long run this morning, which is why I took my driver's license out of my wallet in the first place.

Police officer: Step out of the car, please.

Me: OK. Hold on a moment. My quads are killing me and I didn't get a chance to use my foam roller, so it hurts to walk.

Police officer: You have the right to remain silent. Anything you say or do can be used against you in a court of law...

All of this could be alleviated by having some kind of runner's ID that doesn't necessitate having to move my driver's license back and forth. Here's an example of a runner's ID:

I need to get on this right away.

Medal Holder
You will never guess how I display my race medals right now. I hang them from the base of a folded-up ironing board that I store in my closet.

It doesn't get much more glamorous than that, does it? 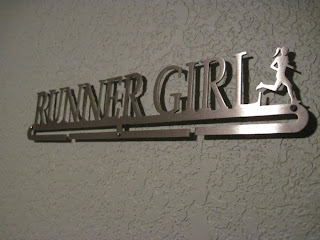 The "real" medal holders are nice, but I've never seen them for less than about $75 apiece. In my opinion, that's a bit pricey.

In the past, some of you have provided some nice suggestions on more affordable methods for displaying race medals. Unfortunately I just haven't gotten around to putting anything together. One of these days it will happen!

Any other suggestions? What things do y'all have on your fitness wish list?
Posted by emmers712 at 11:25 AM