[Get ready for a TON of pictures in this part of the recap!]

On the morning of the Disneyland Half Marathon, I was awake before my 4:00 AM alarm went off. I had prepped all of my gear the night before so all I had to do was get dressed, put on my contact lenses, and head out the door to catch a shuttle bus.

As is sometimes the case for me on race mornings, I woke up with all kinds of bizarre aches and pains. My right knee was still feeling dodgy and out of nowhere my left ankle was feeling achy. The thought crossed my mind that perhaps my legs weren't going to work today. Even though I had exactly zero goals going into this race, the pre-race jitters still announced their presence with authority.


I hopped onto a shuttle bus packed with runners dressed in all kinds of sparkly, glittery race costumes. Adam and I were staying at a hotel that was only about 1.5 miles away from the Disney gates, so it was a very quick ride. The runners got dropped off and everyone started walking towards the start village near Downtown Disney. The sun hadn't risen yet and the parks looked magical in the dusk.


I got to the start village and was mesmerized by the brightly-lit stage up front, accompanied by rocking music. I took this picture with some green military men in front of the stage: 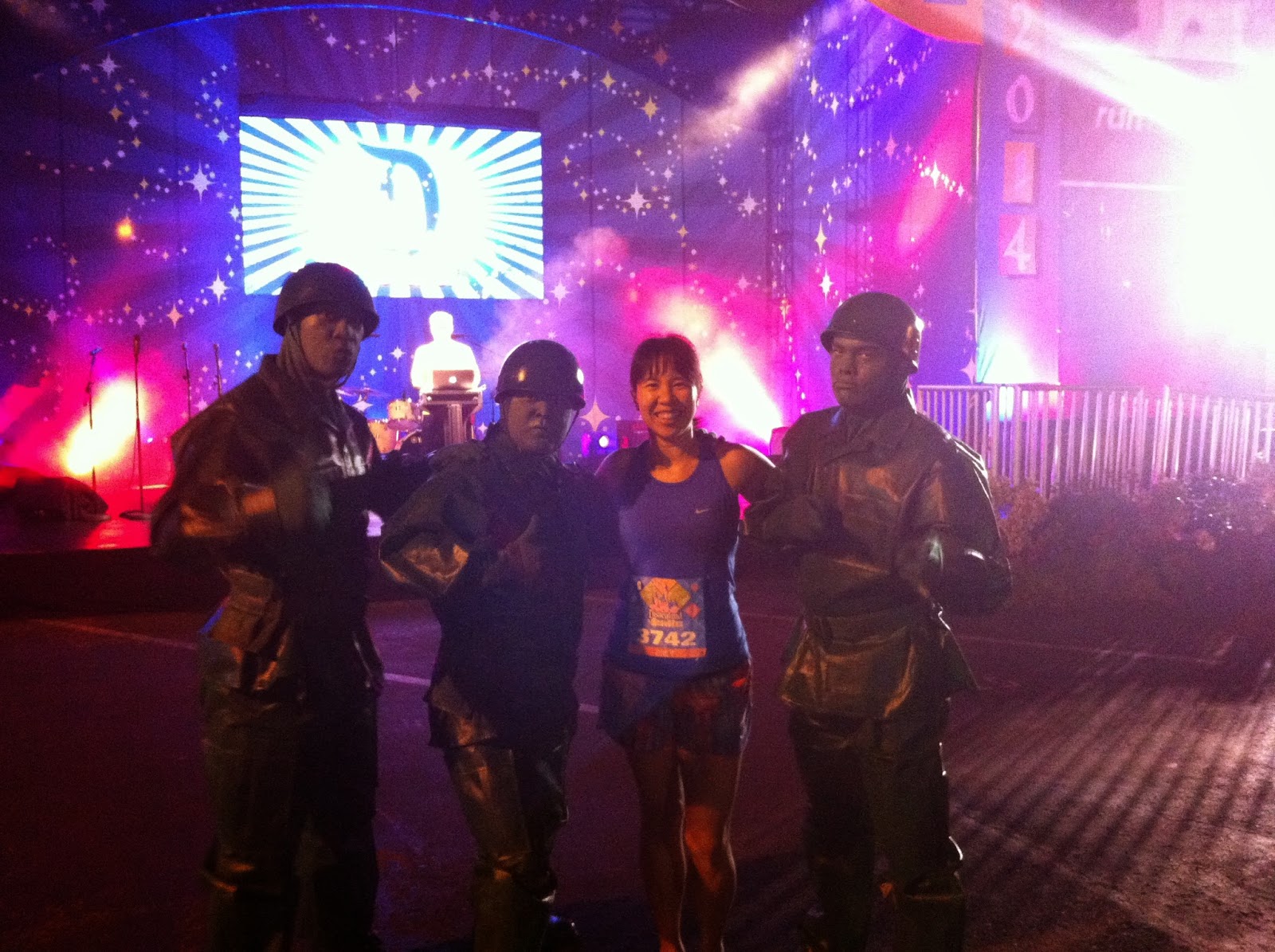 The crowds were pretty thick but gear check and all of the other pre-race amenities were easy to find. I found a patch of asphalt to eat breakfast, apply BodyGlide, etc., and tried to absorb as much of the pre-race energy surrounding me as possible. Then I met up with Kayla and we took this photo. (Isn't her race outfit adorable!?!? You can't see it in the picture, but she's also wearing a matching sparkly headband.) 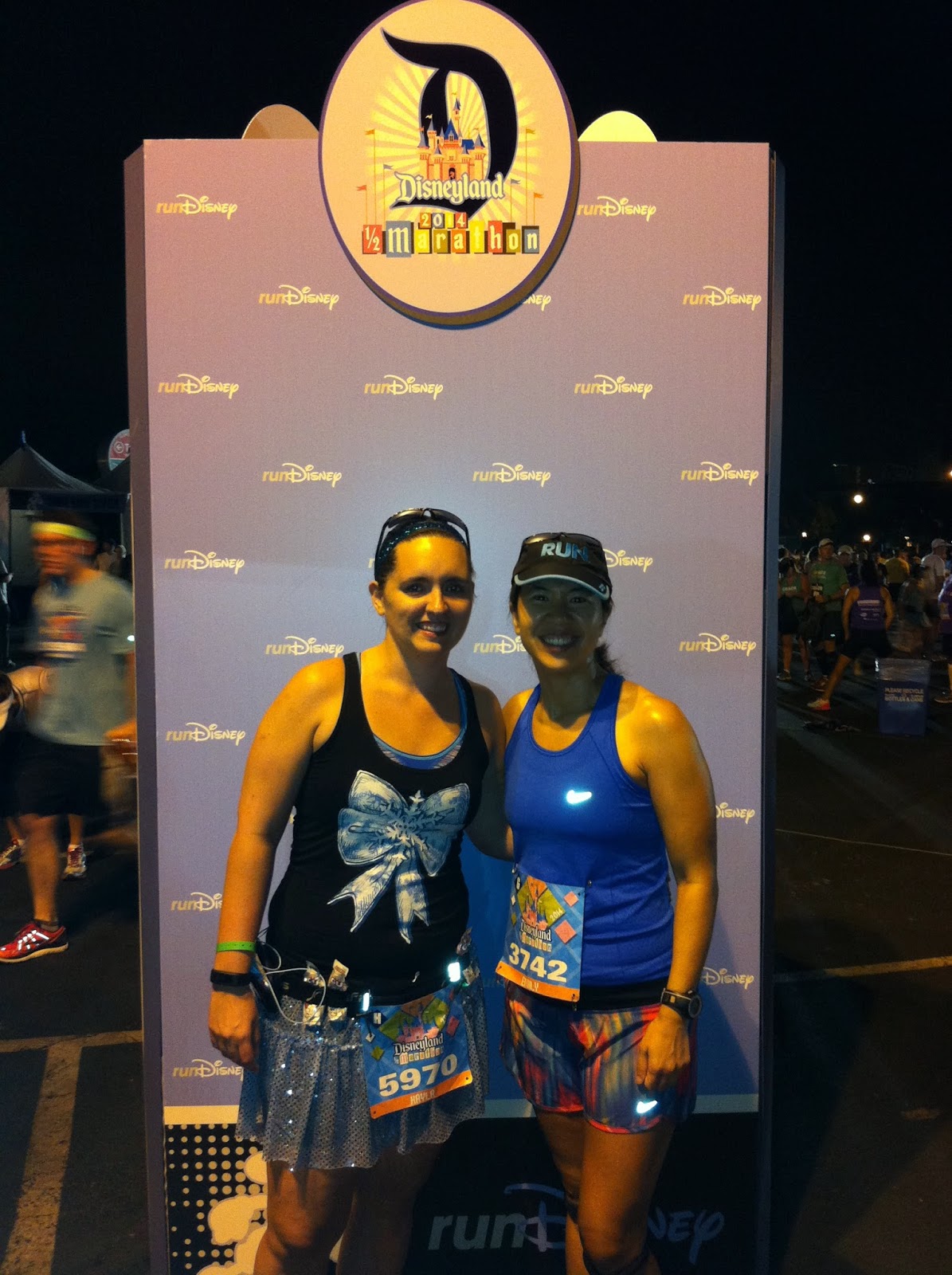 After visiting portapotty city and dropping our bags off at gear check (both were a snap), Kayla and I joined the mob of runners heading towards the start corrals.

An emcee announced that there were over 18,000 runners participating at the Disneyland Half. There were so many people that it felt like the number was much higher than that, though. There were runners everywhere the eye could see.


The corrals were packed. My corral didn't end up crossing the start line until almost a half hour after the gun went off. After all the waiting, I began needing to use the bathroom again and feeling nervous. As my corral inched towards the start line, I was overjoyed to discover that there were some portapotties nearby. I jumped out of the corral and made a beeline to the portapotties again. Afterwards, it felt like a huge weight had been lifted off of my shoulders. NOW, I was ready to run this race!

Here's a picture of the starting line: 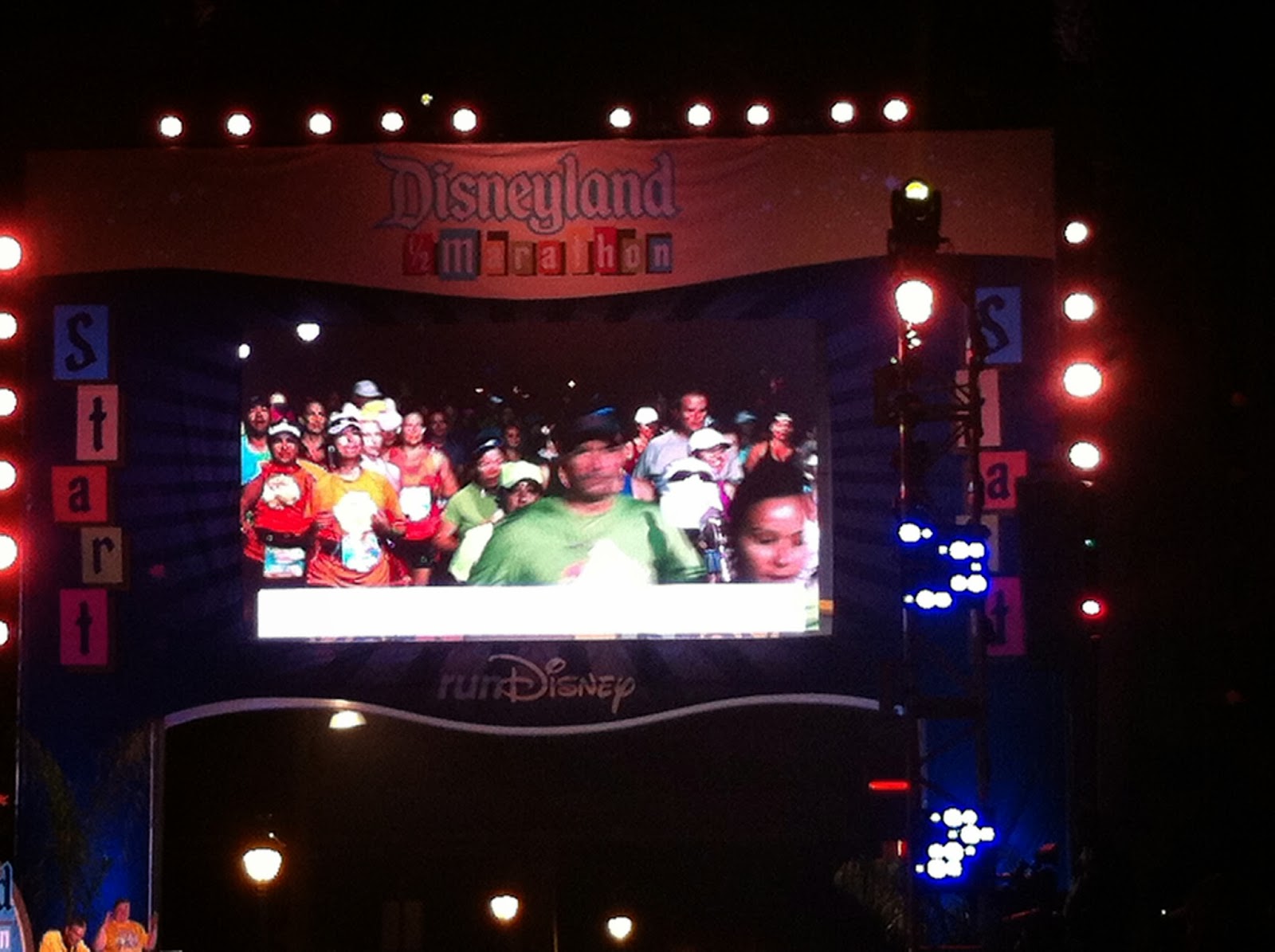 As race adrenaline kicked in, I was thankful that all of the aches and pains I had been feeling pre-race were now gone! Not surprisingly it was quite crowded at the outset. I nearly tripped over a couple of the road reflectors embedded in the asphalt, so I started being careful of my footing.

The first mile of the course ran through the streets outside of Disney California Adventure. There were plenty of spectators, plus some local school bands and color guard team members (sorry about the blurry pictures): 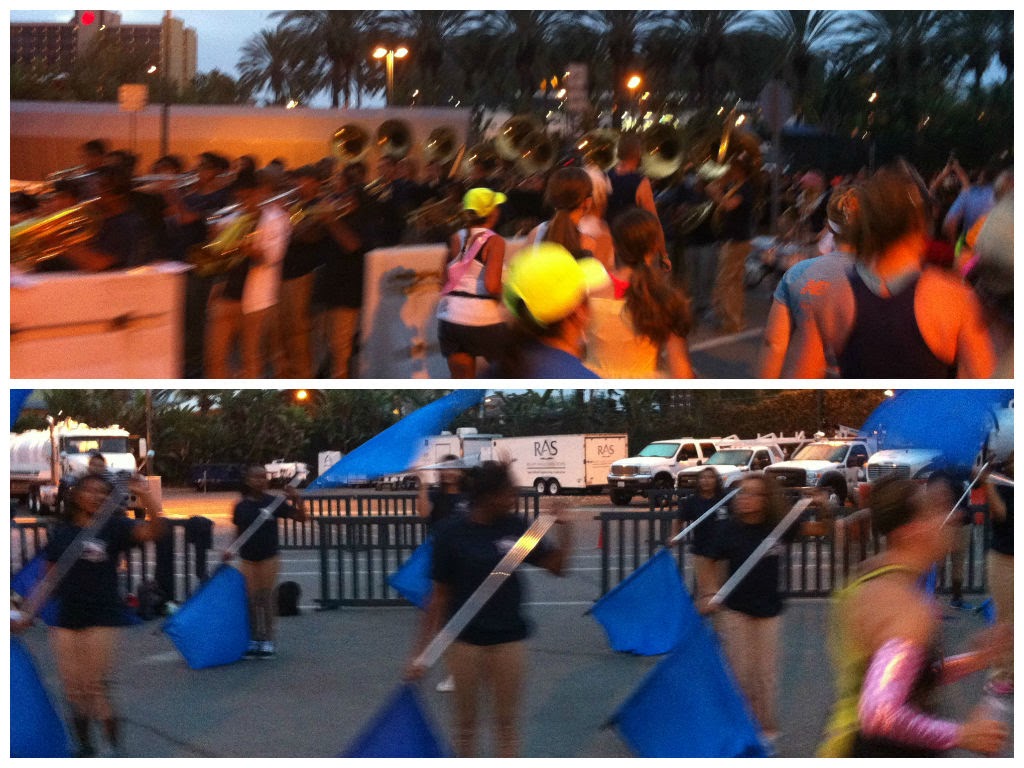 Then, we rounded a corner and entered Disney California Adventure. Whoo! Right away, I started seeing parade floats:

We ran in front of Paradise Pier and the World of Color. So festive with all of the twinkling lights! 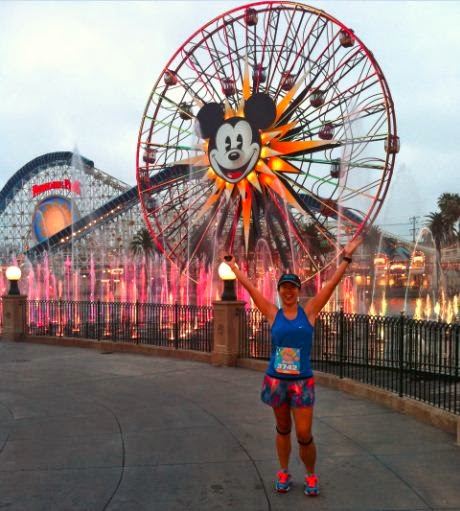 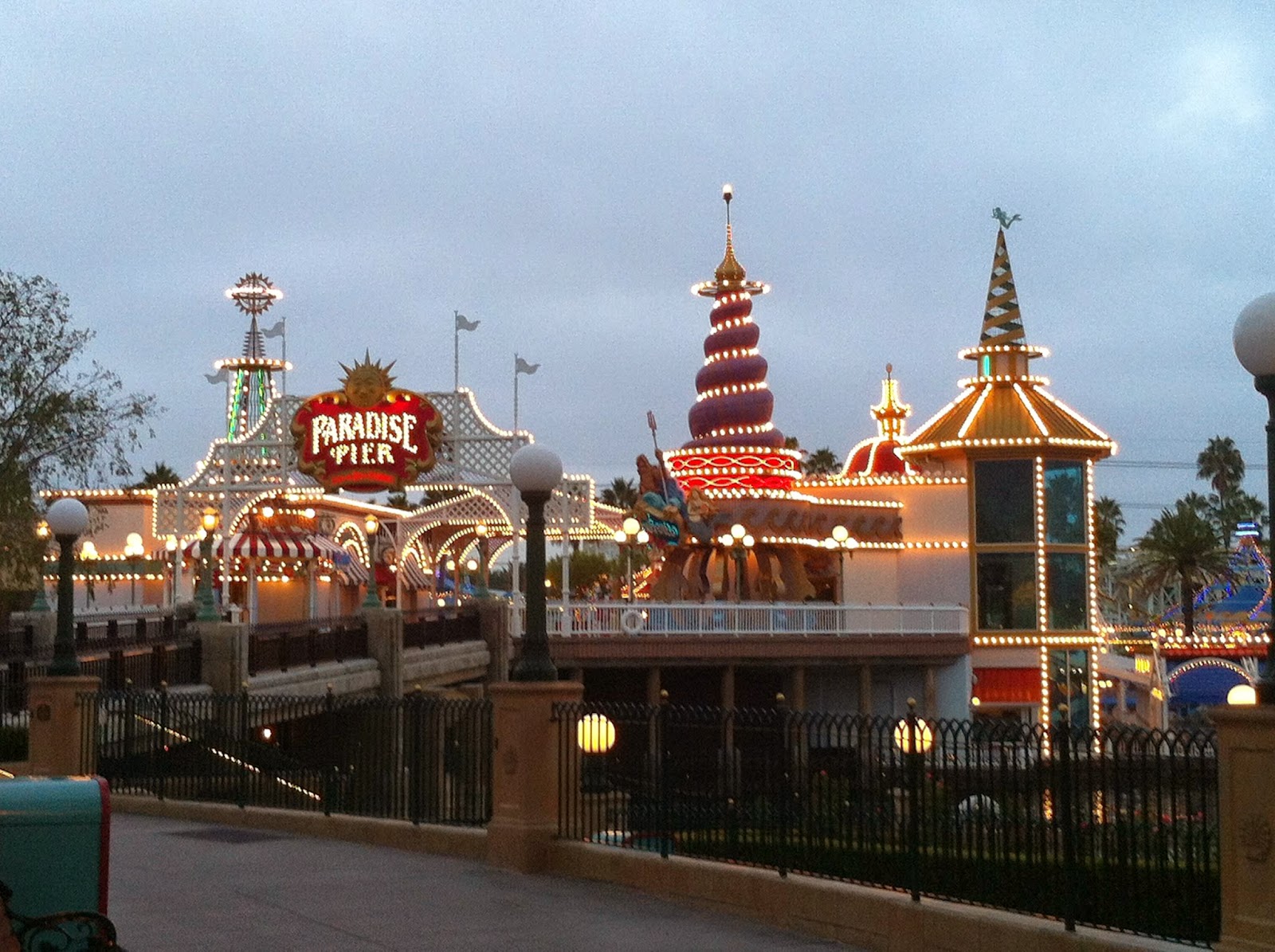 Here's what one of the mile markers looked like: 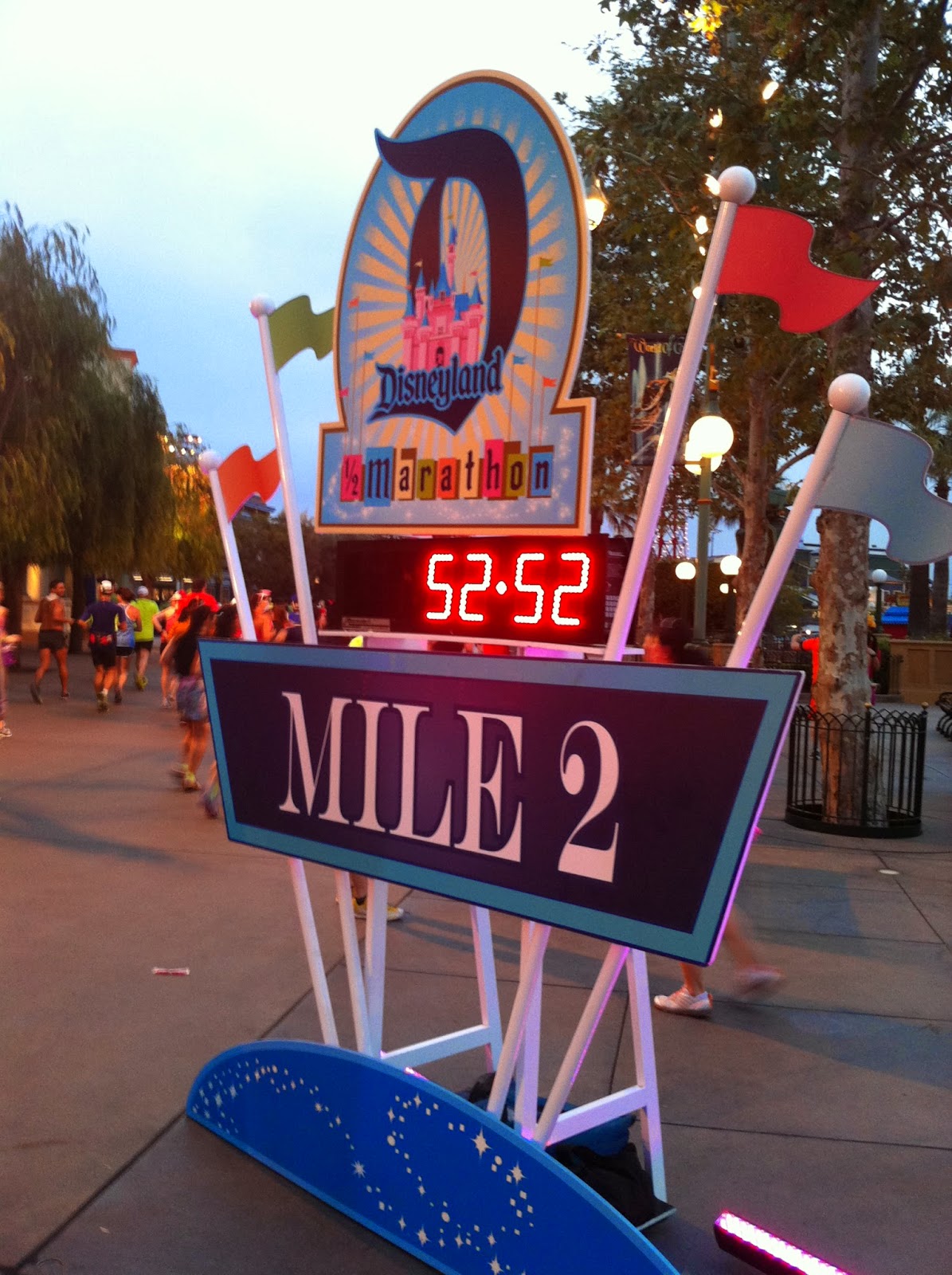 Then it was on to Pacific Wharf and Hollywood Land:


Time for Cars Land, with lots of runners lined up to take pictures with the adorable cars: 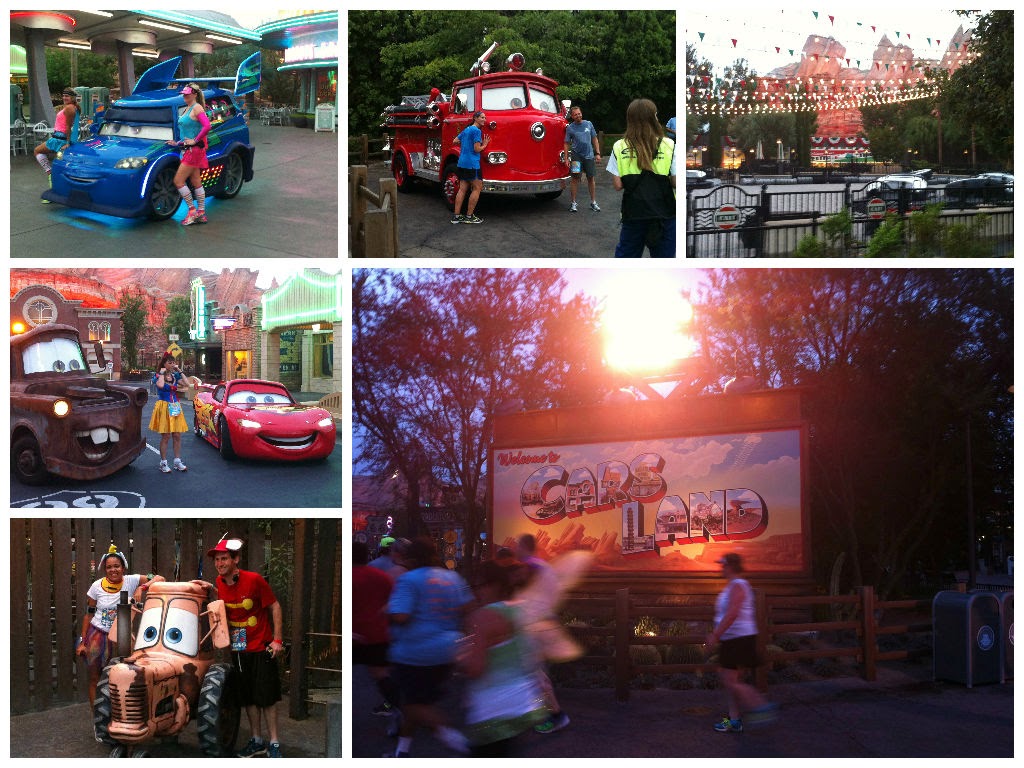 I saw at least one lovable Disney character in that area posing for pictures: 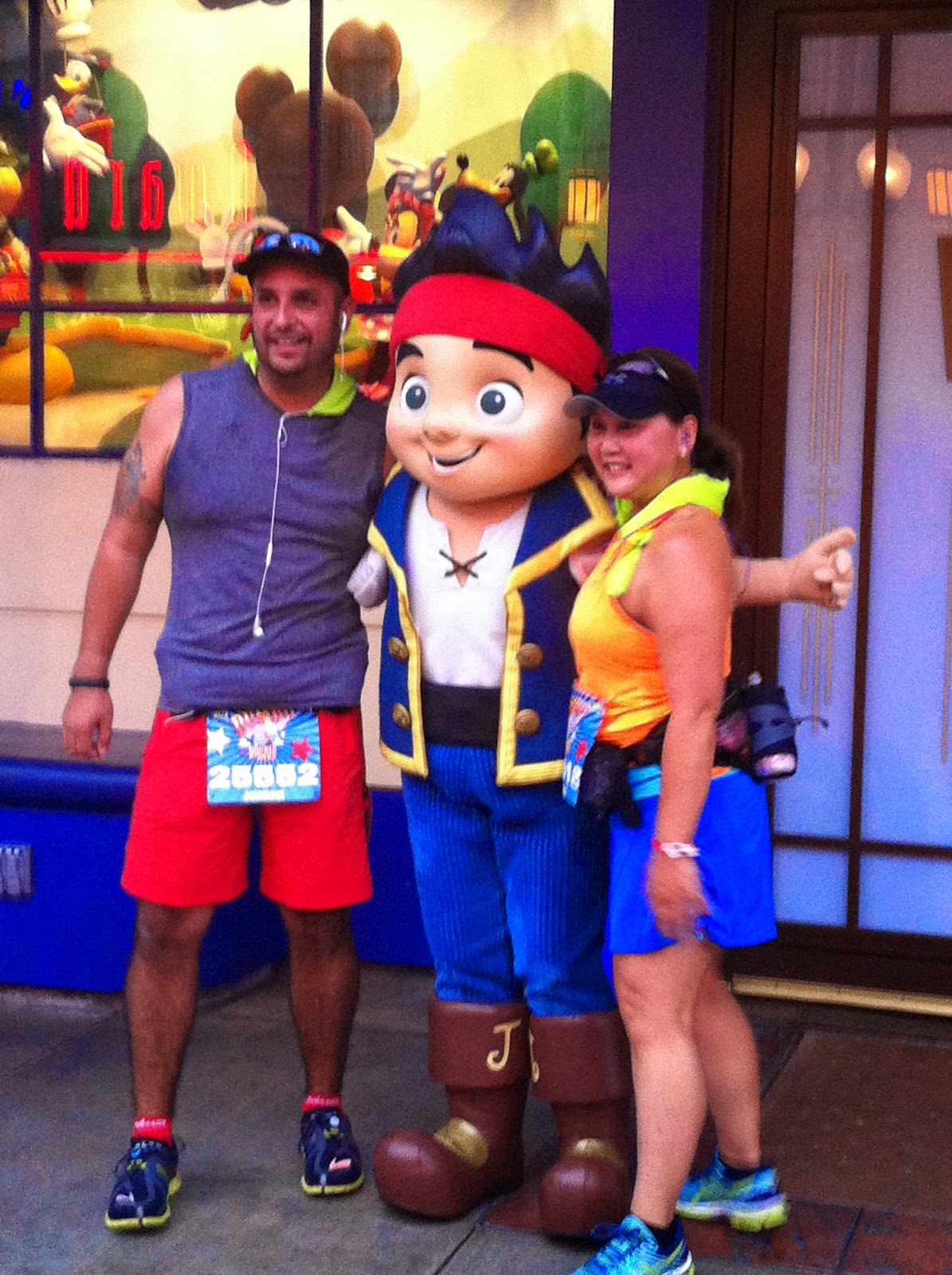 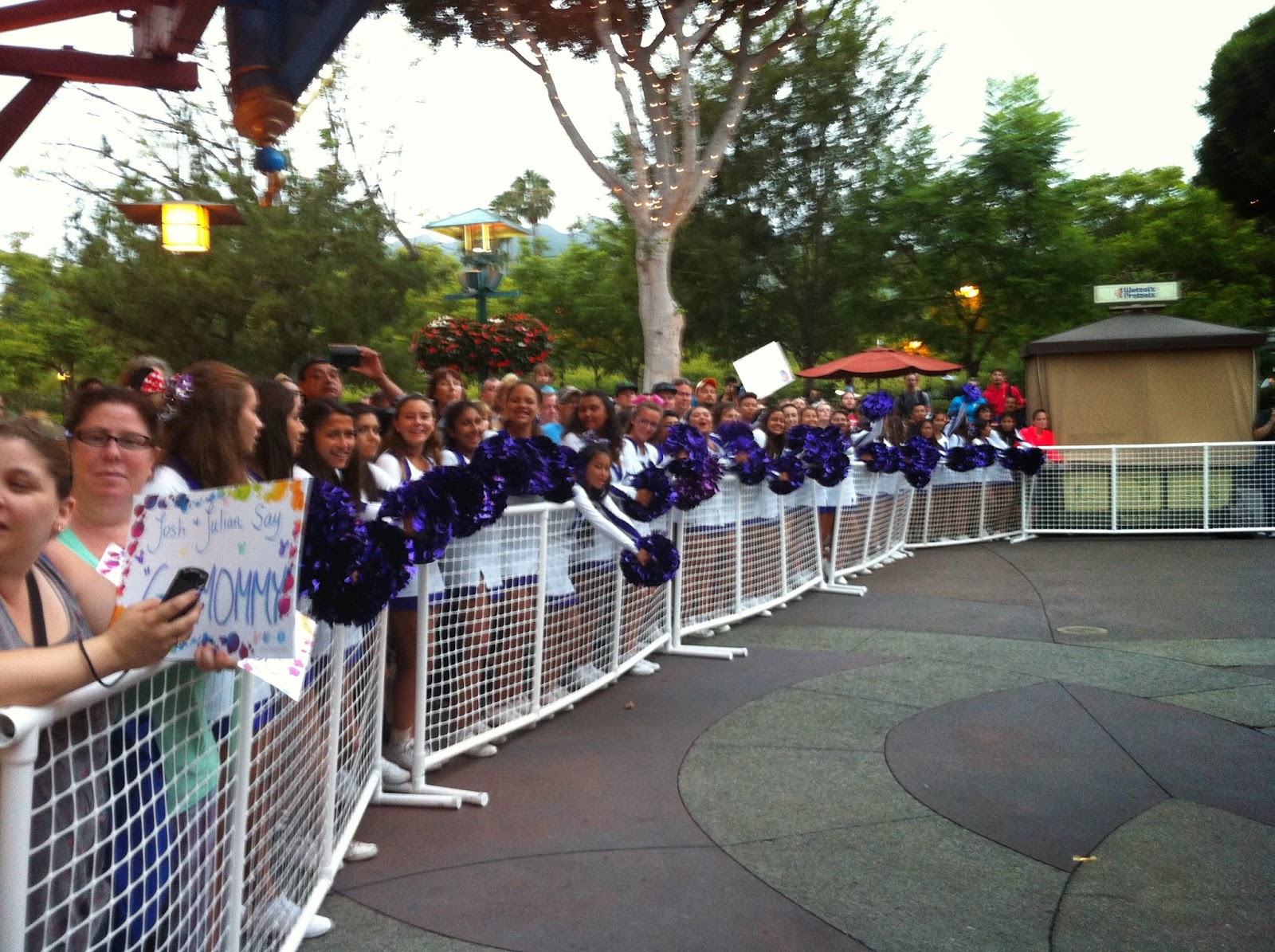 Then we headed into Disneyland. There was an enormous crowd of folks lined up to take pictures at the front entrance. I attempted a selfie but couldn't get it to come out very well, so I settled on taking a regular picture. 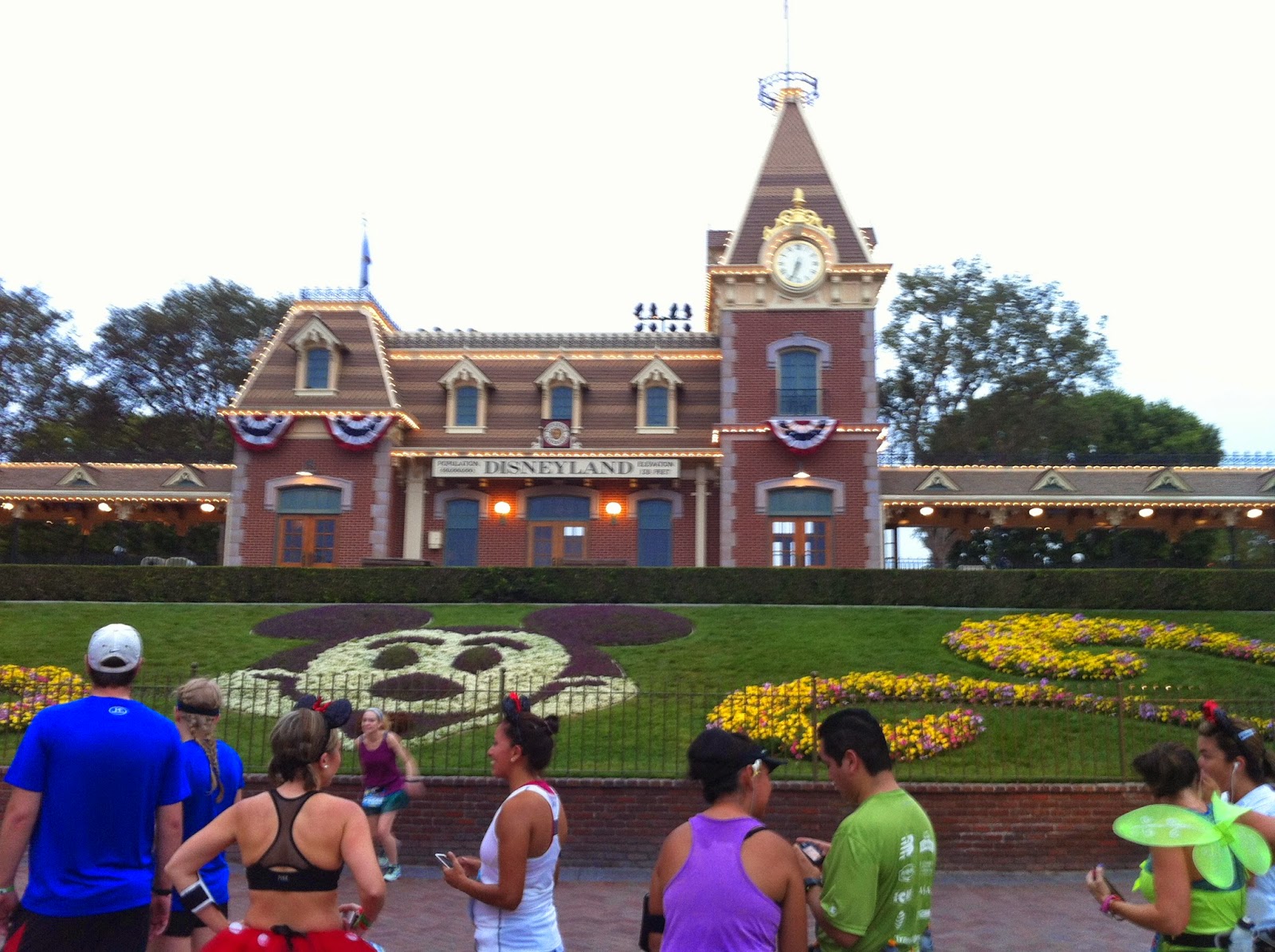 Here are pictures from Main Street and in front of Sleeping Beauty's Castle. There was a very long line of folks wanting to take photos with themselves in front of the Disney Partners Statue of Mickey and Walt. This backdrop was too priceless to pass up for a photo so I decided to wait. 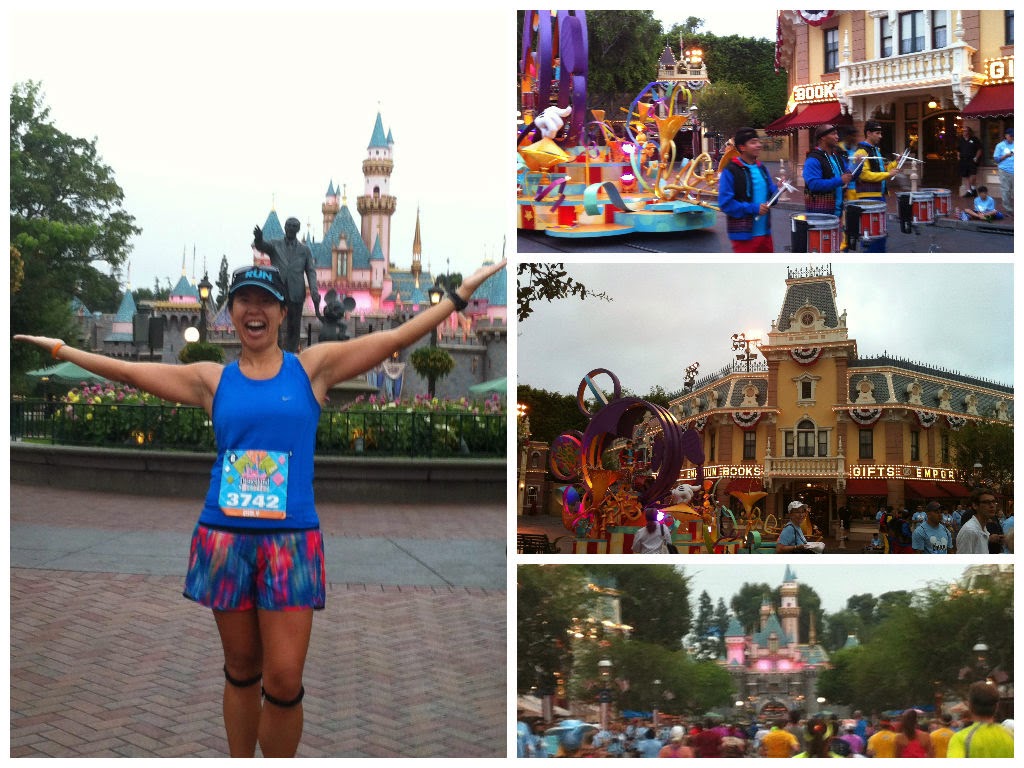 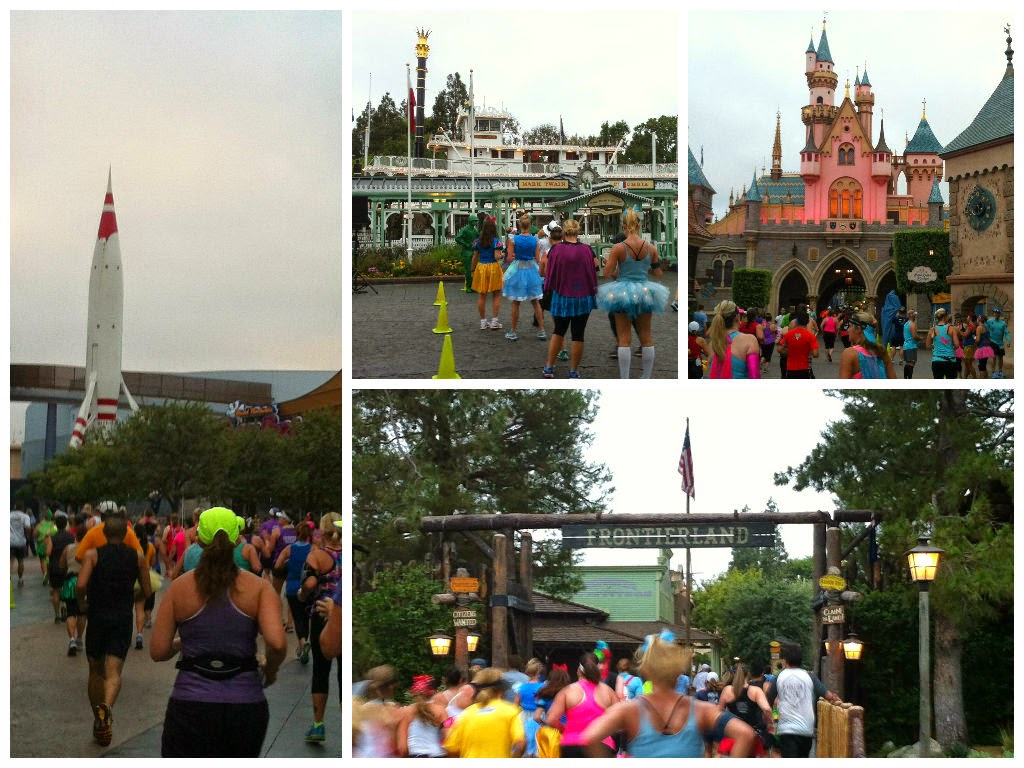 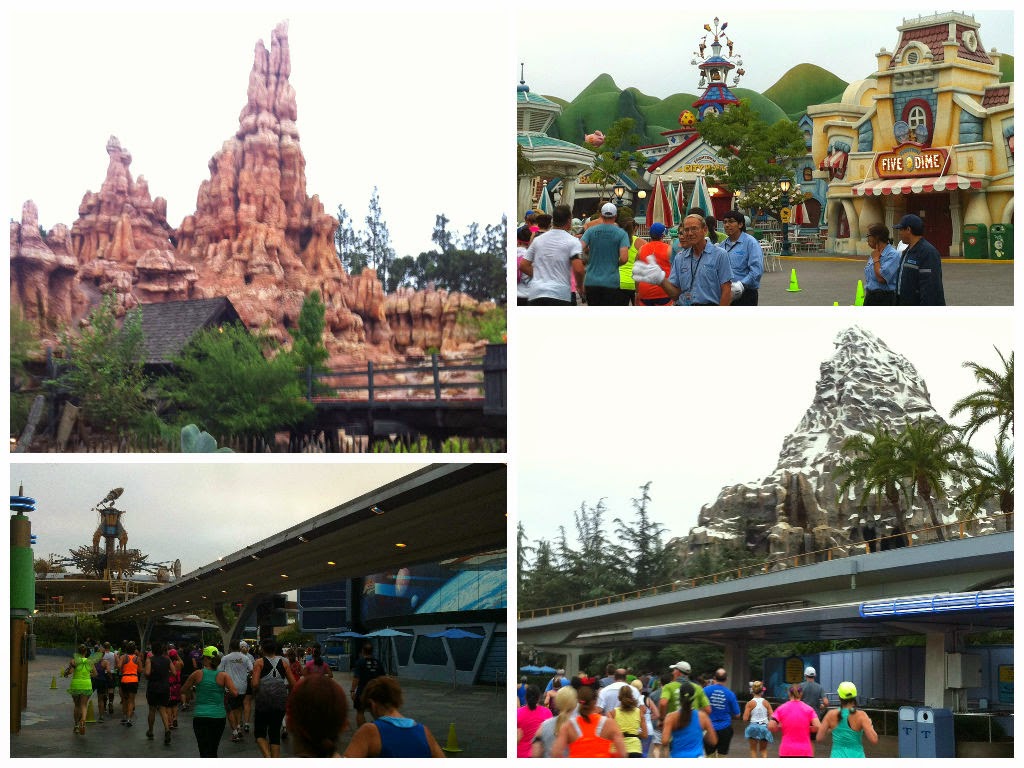 We ran past Mickey's house and Minnie's house in Toon Town:


There were lot of Disney characters available for photos, of course: 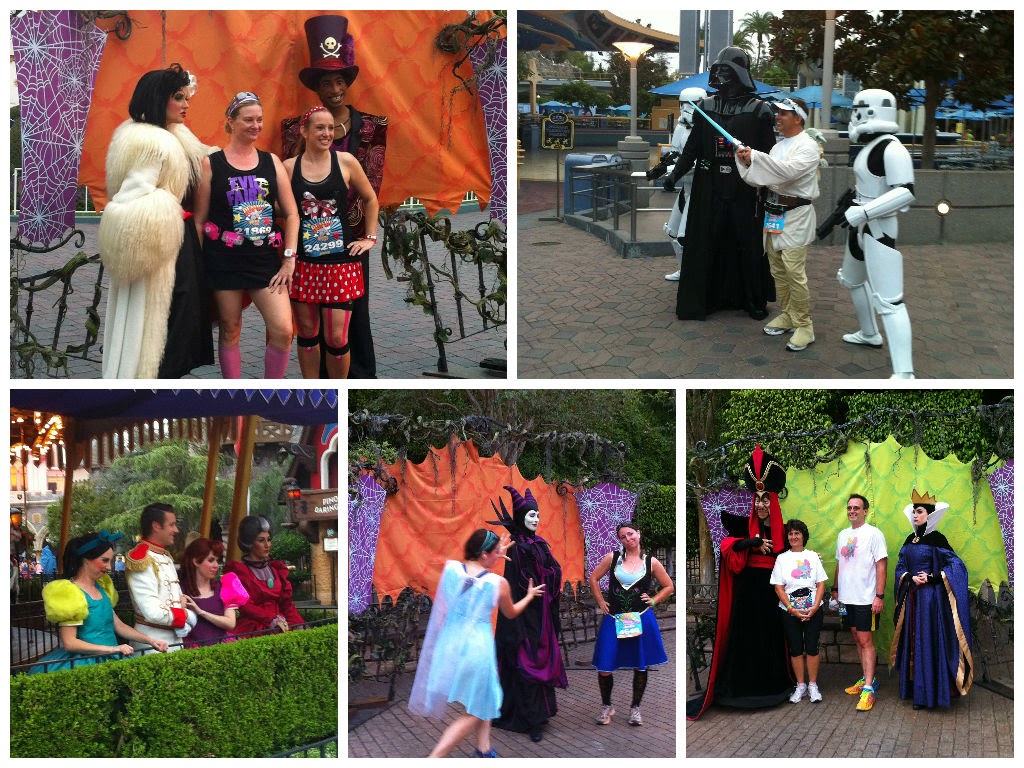 As the runners exited Disneyland, we were met by spectators of all different shapes and sizes. The crowds included this gathering, which really warmed my heart: 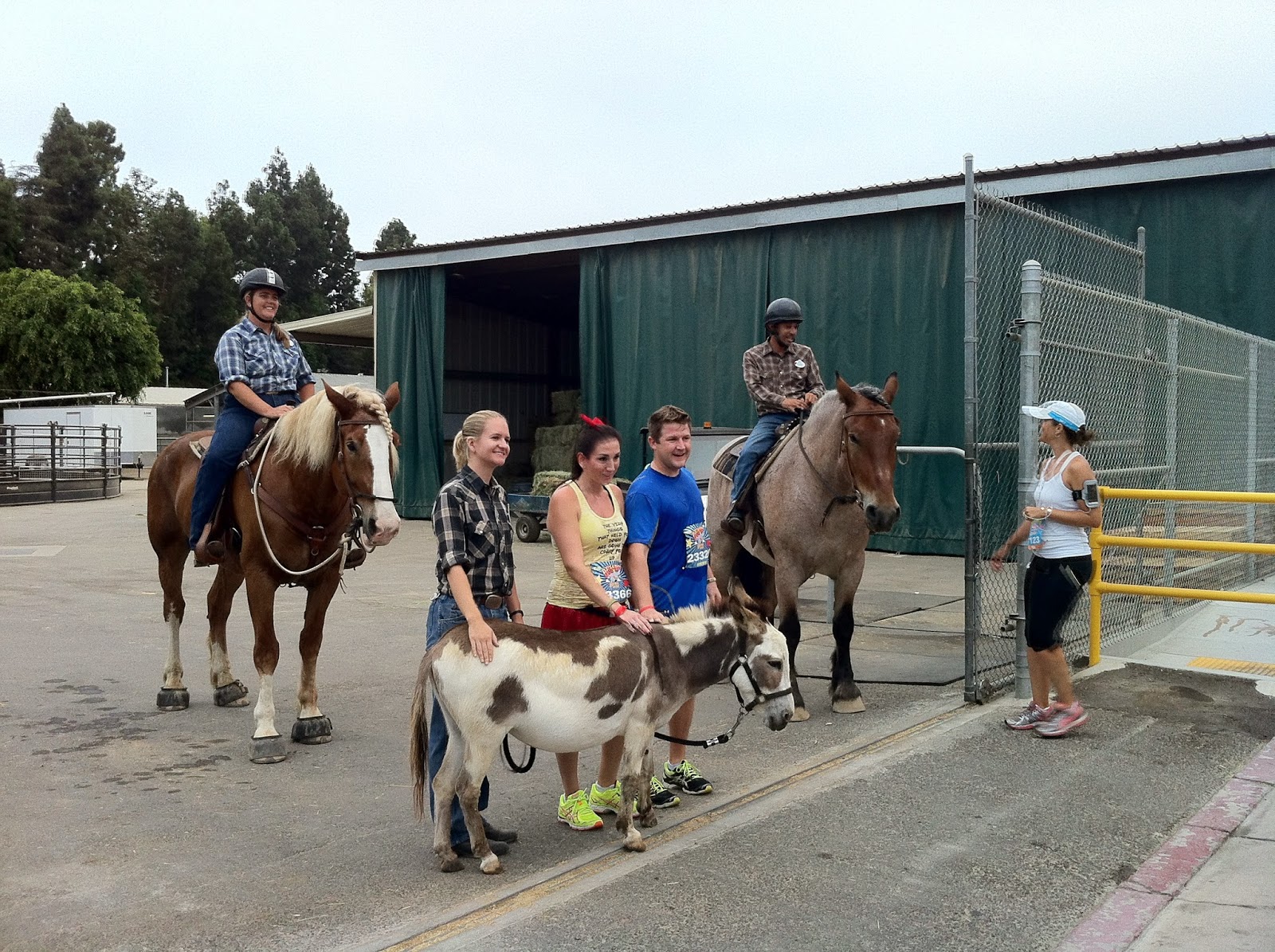 The runners then hit the streets of Anaheim - in a big way. Here's a picture of the runners en masse (this was taken around Mile 4.5): 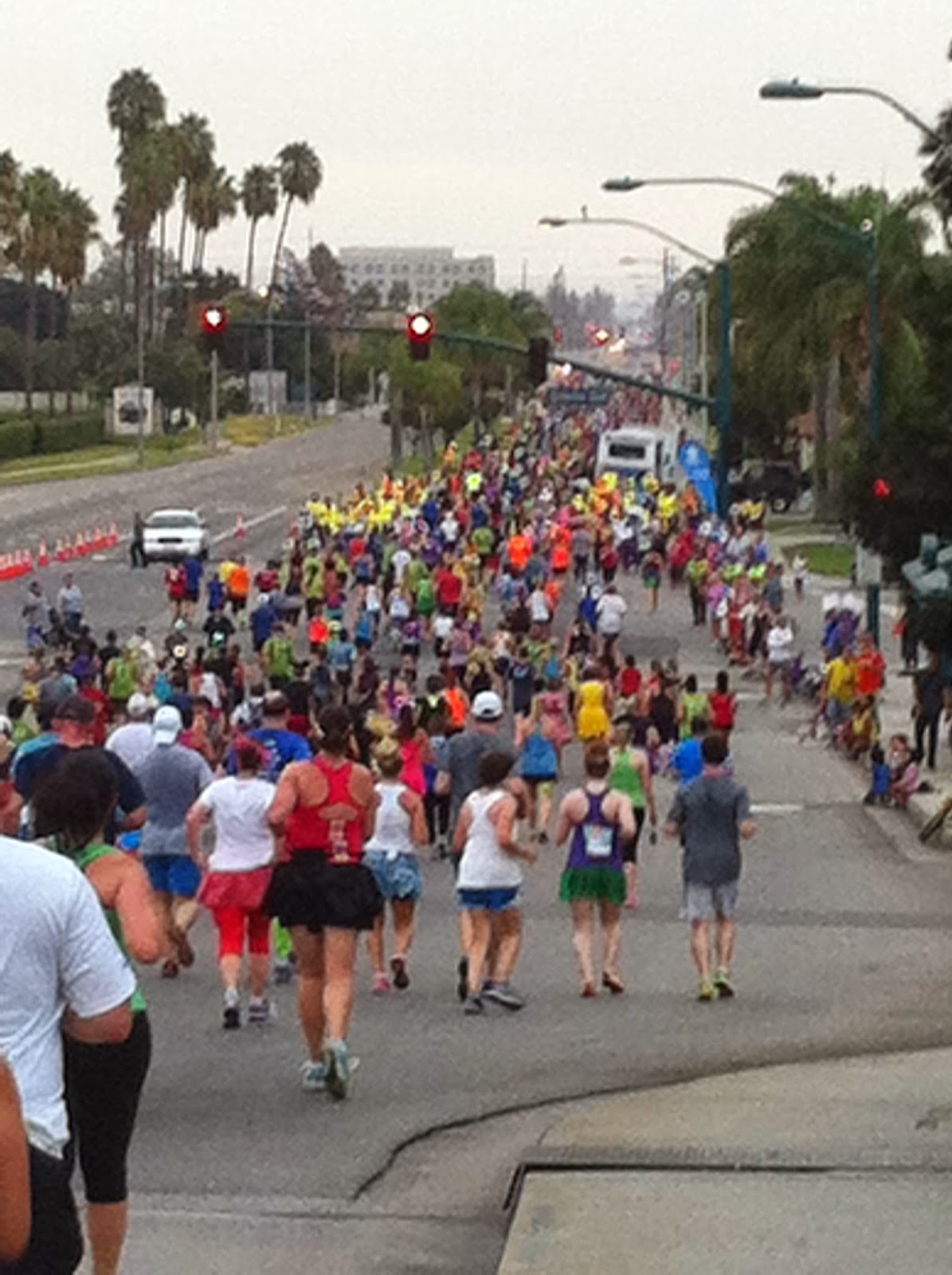 There were TONS of local cheerleaders and dance squads giving us their all: 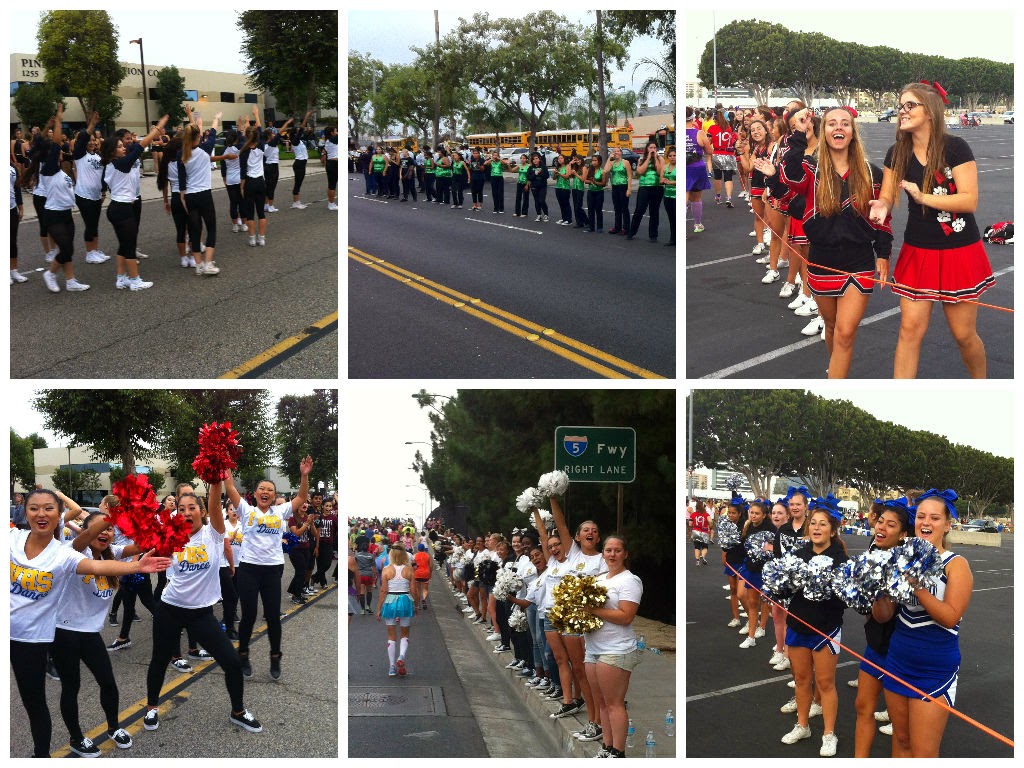 Lots of local high school bands were stationed along the course playing music: 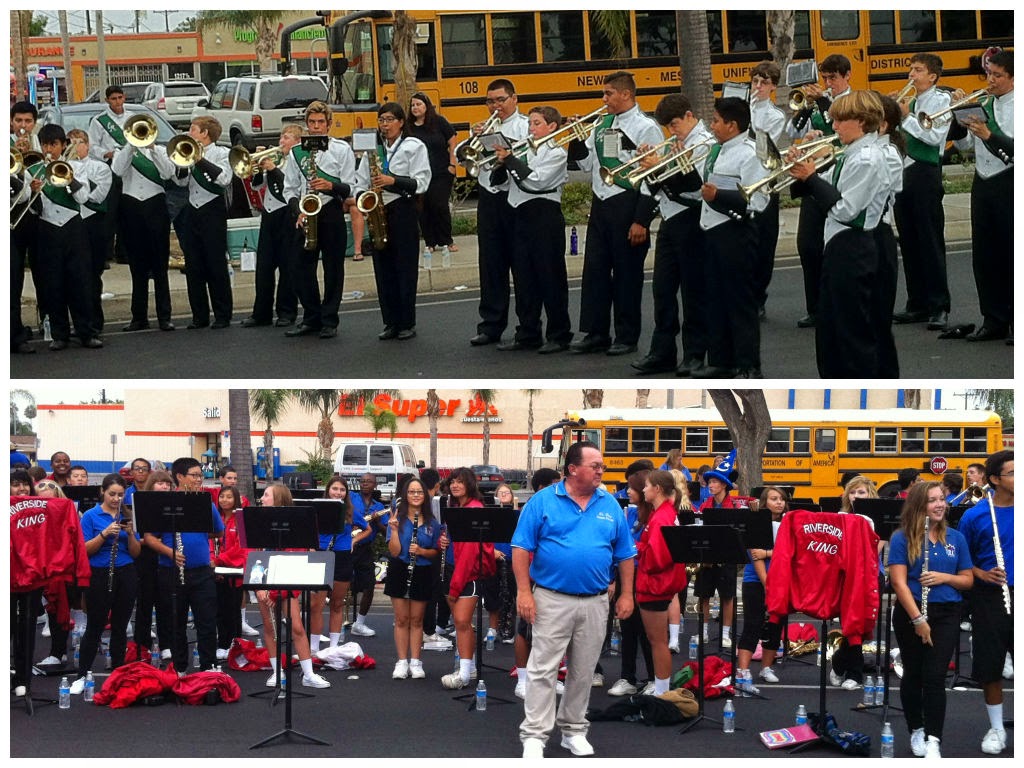 We saw Mexican dancers and Hawaiian dancers strutting their stuff: 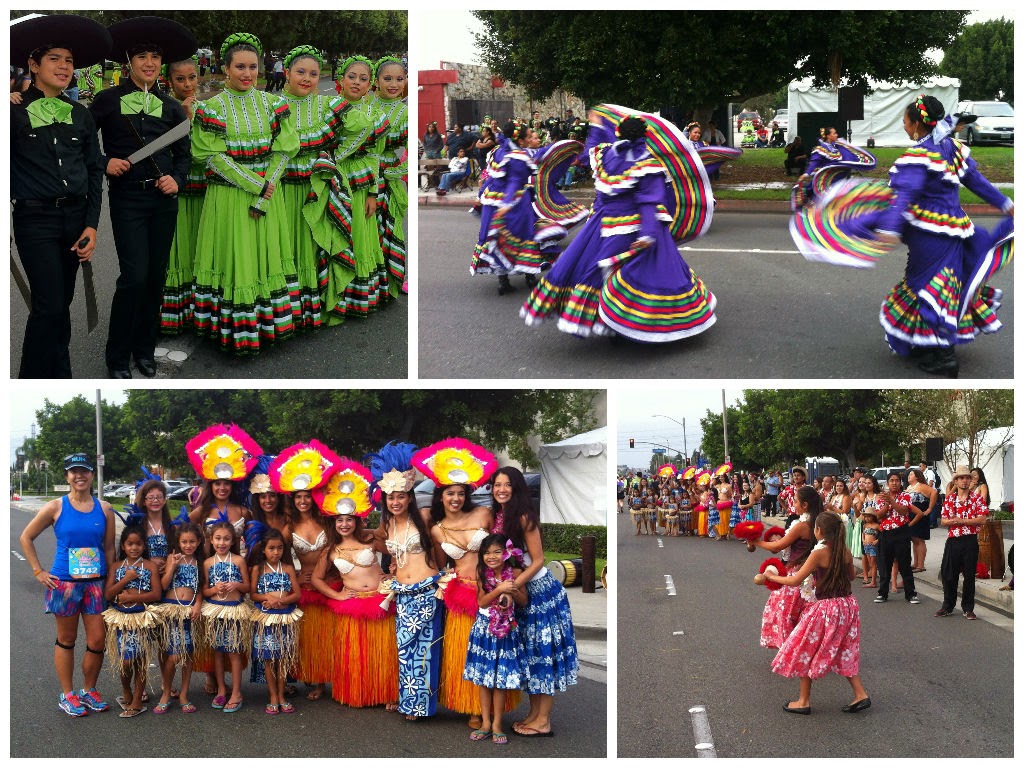 Dozens of spectators offered us fruit, pretzels, candy, cold sponges, ice, and hugs (literally - there was a guy with a sign that said "Free Hugs!") I high-fived as many people as I could, plus I thanked everyone for being out there and for all their offerings. I did get a Free Hug, pretzels, ice, and some orange slices. Everything was awesome but the oranges were a real standout for me. They were so sweet they tasted like candy. Delicioso!

As the runners started approaching the Honda Center and Angel Stadium, the streets were lined with a seemingly endless row of antique cars. Their proud owners were gathered amongst the cars, cheering us on: 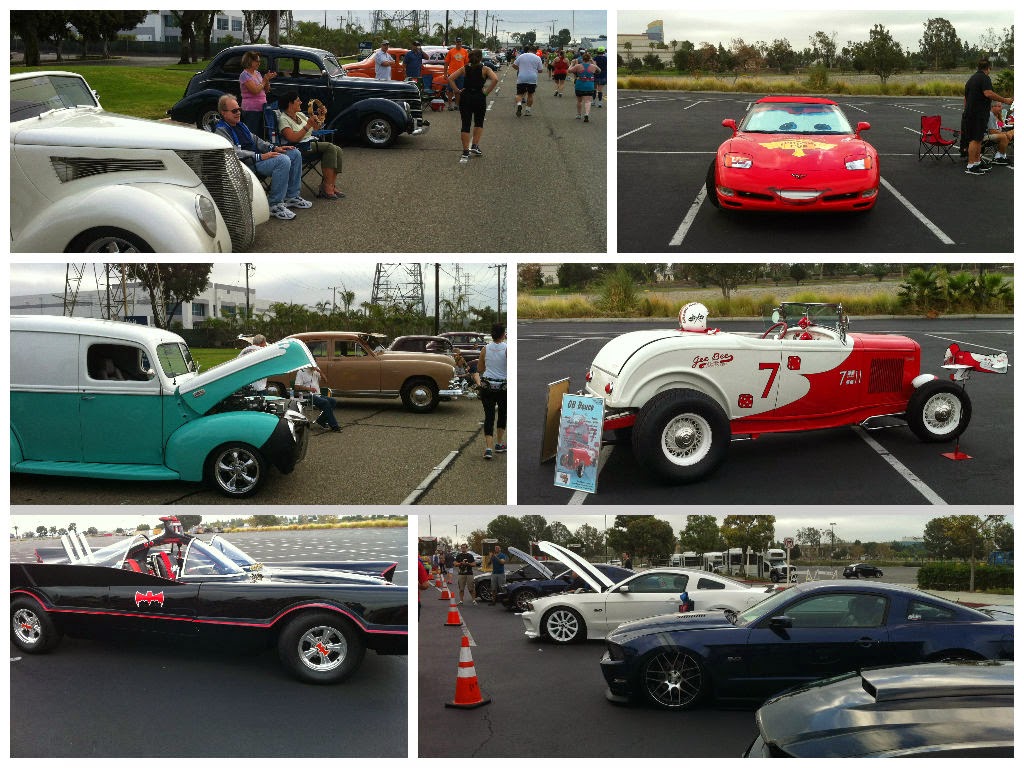 I couldn't resist taking my photo with this particular car, which was adorned by the two guests of honor: 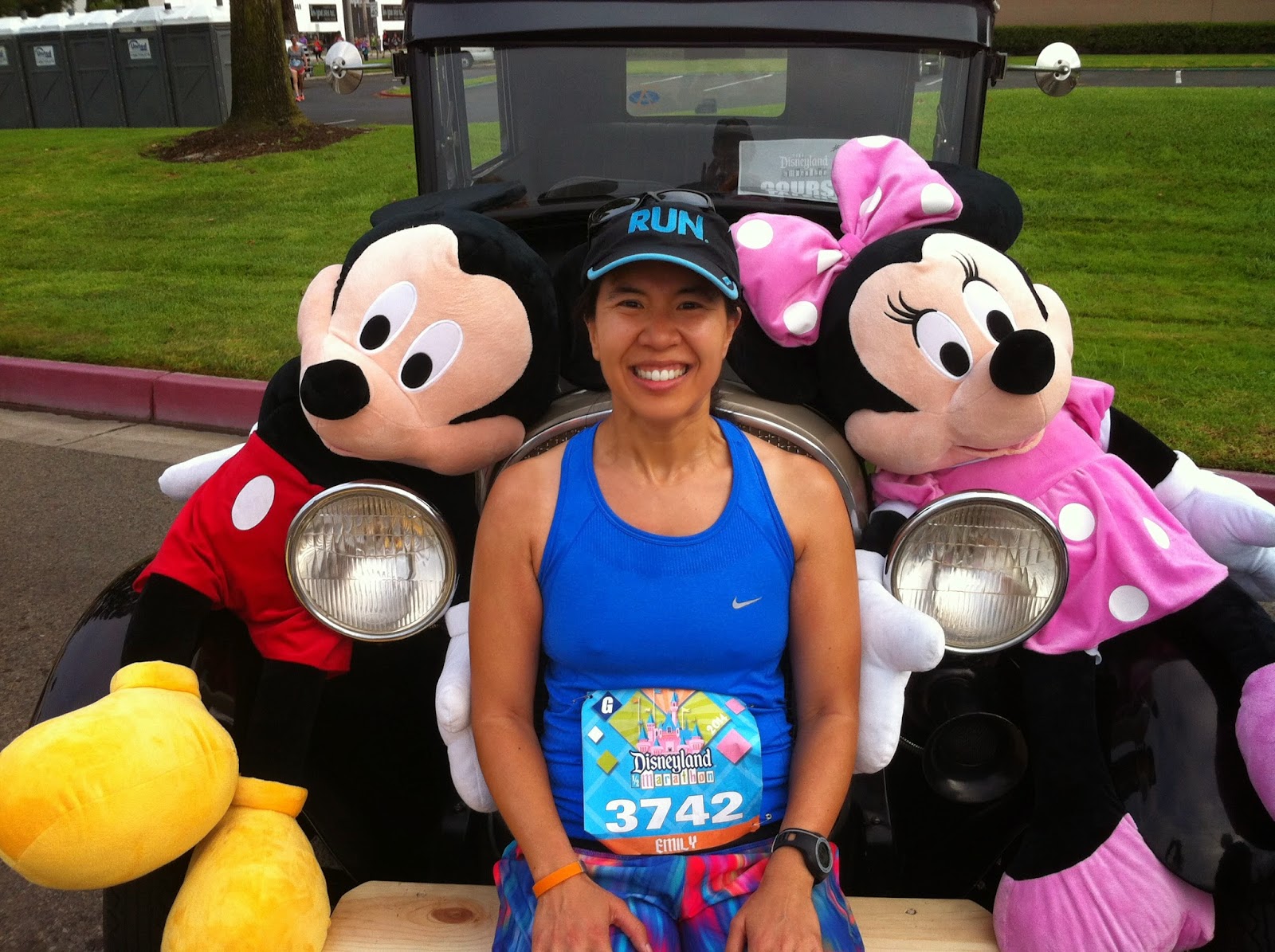 Amidst the antique cars, we passed by the Honda Center, home of the Anaheim Ducks. 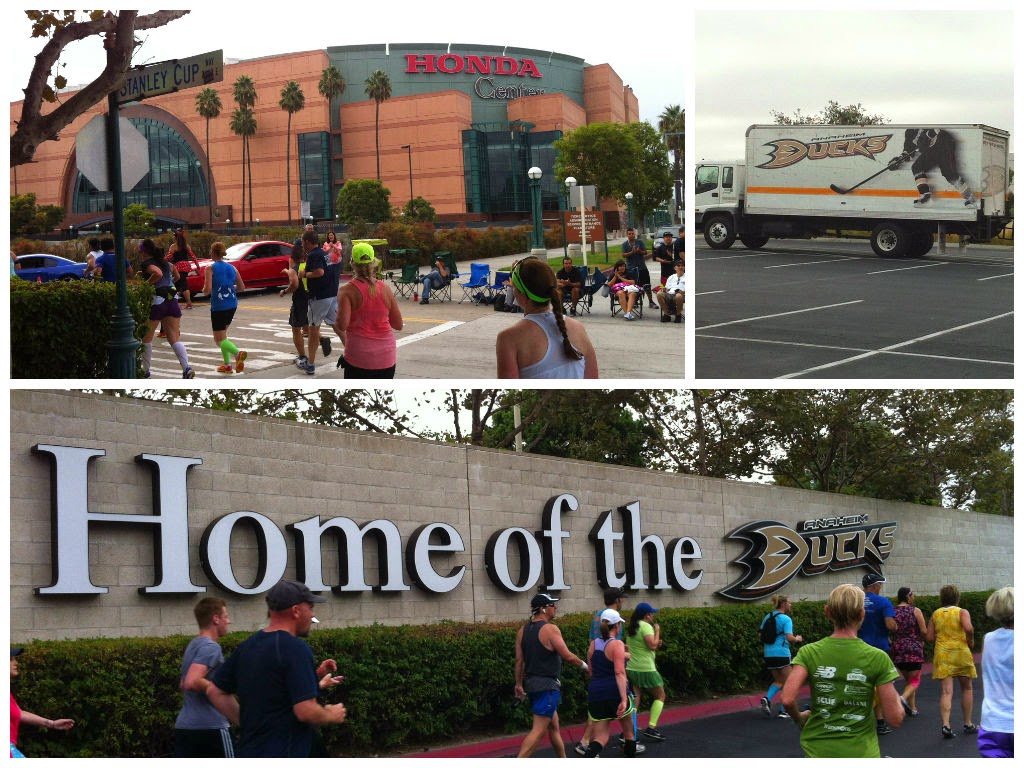 Check out the name of the street in front of the arena - "Stanley Cup Way." I think that's pretty bold for a team that has won only one Cup! Also, one of the Ducks' trucks was parked along the course. I wonder if they were trying to pass it along as part of the antique car lineup? LOL. 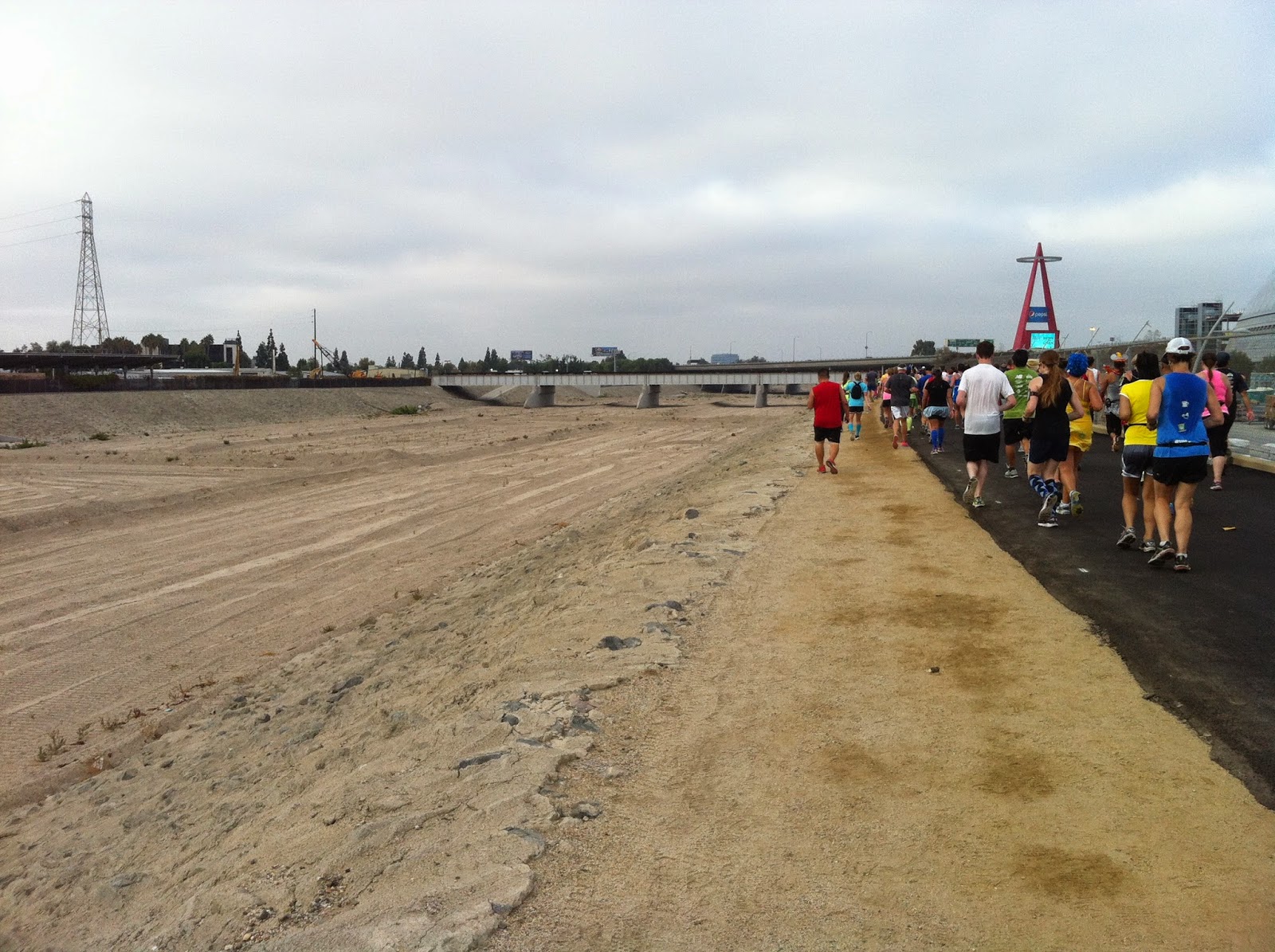 This made me sad. I know that California is in the midst of an extremely severe drought right now, and seeing this really put things into perspective for me. Water conservation efforts, unite!

Next, it was time for the biggest highlight of the race outside of the Disney parks themselves: running through Angel Stadium! Here are some pictures I took as I was approaching (they were also handing out Clif Shots right before we entered the stadium): 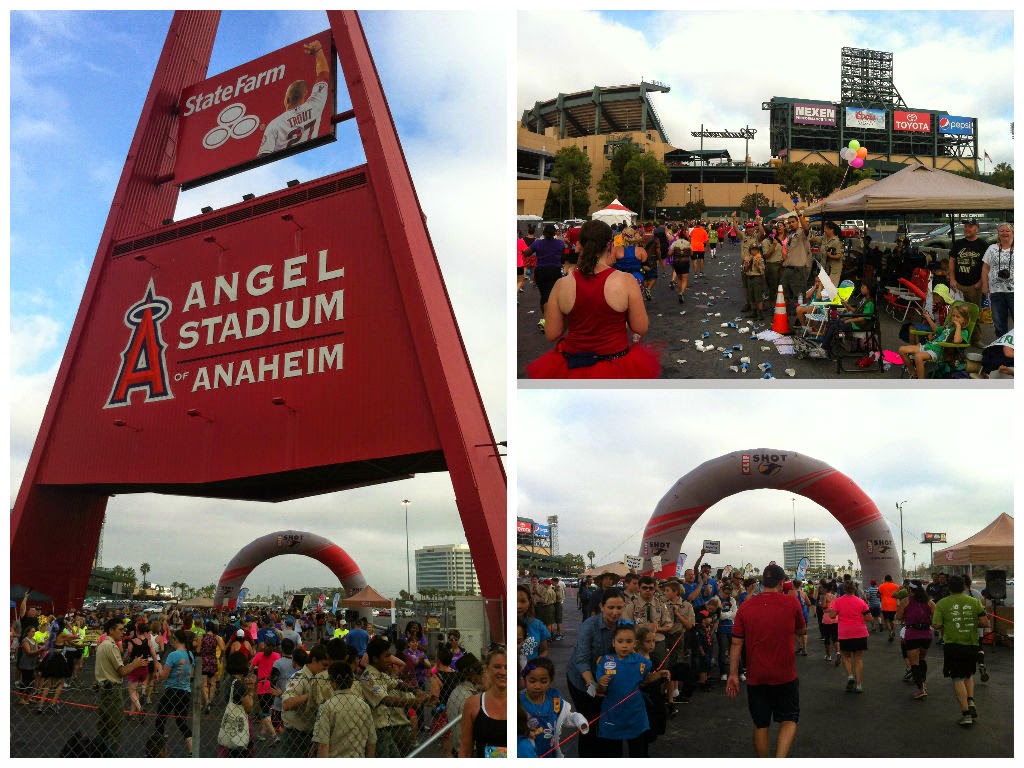 Inside the field, the crowd of screaming spectators was enormous. It gave me chills.

I've never been a big baseball fan but there is something so magical about running onto an MLB baseball field (or through the field of any major sports arena, for that matter). It was an unbelievable experience.

I was snapping pictures at every angle I could think of. However, my phone chose that particular moment to run out of memory. Argh! I stepped off to the side and tried to continue enjoying the atmosphere while I furiously deleted old photos off of my phone to free up memory. Note to self for next time.

We exited the stadium a little before the Mile 10 marker. Then it was back through the streets of Anaheim to return to the Disney parks. Enroute, there were tons more cheerleaders, bands, and screaming spectators offering us all kinds of support.

Up until this point, the weather had actually held up very nicely with overcast skies, which kept the temperature pleasant. But then the sun started coming out, and things started heating up big-time. I was thankful to be in the home stretch.

My Garmin was measuring the distance more than a half-mile longer than the posted mile markers. I had expected this to some extent, since my picture-taking frenzy had me doing a ton of veering around on the course. I was still surprised that it had added up to THAT extent, though.

After exiting Angel Stadium, I took fewer pictures and started speeding up the pace. (For once, my splits for the last three miles were by far my fastest of the day!) As we got closer and closer to the Disney parks, the crowds started swelling. Incredible amounts of energy everywhere.

I saw my old friend Minnie Mouse just before crossing the finish line. High fives all around! Whoooo!!! Then the finish amongst the roaring crowd. 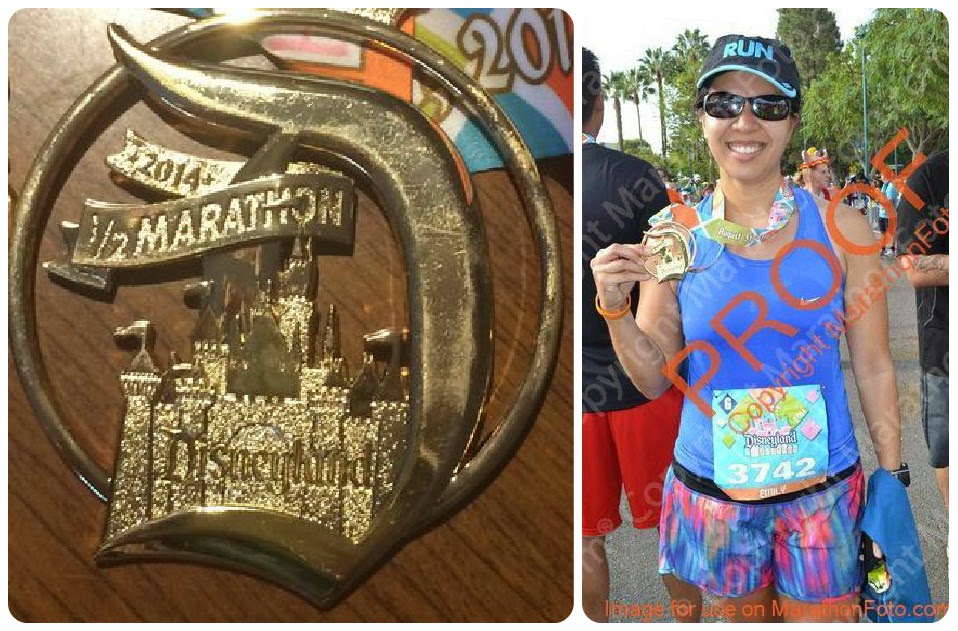 What a blast it was to run the Disneyland Half Marathon! It was so exhilarating to run through the Disney parks and Angel Stadium. Everything was well-organized and I absolutely loved all the course entertainment and the incredible spectators. If it weren't for the high cost and time associated with the Disney races, I'd want to run every Disney race every year!

One last picture. After going back to the hotel and resting a bit post-race, Adam and I headed back to the Disney parks and met up with Kayla again. Here's a picture of Kayla and me in front of Big Thunder Mountain. She is wearing her Disney Coast to Coast medal (congratulations, Kayla!), and I'm wearing my Minnie-themed New Balance shoes (thanks again, Adam!) =D 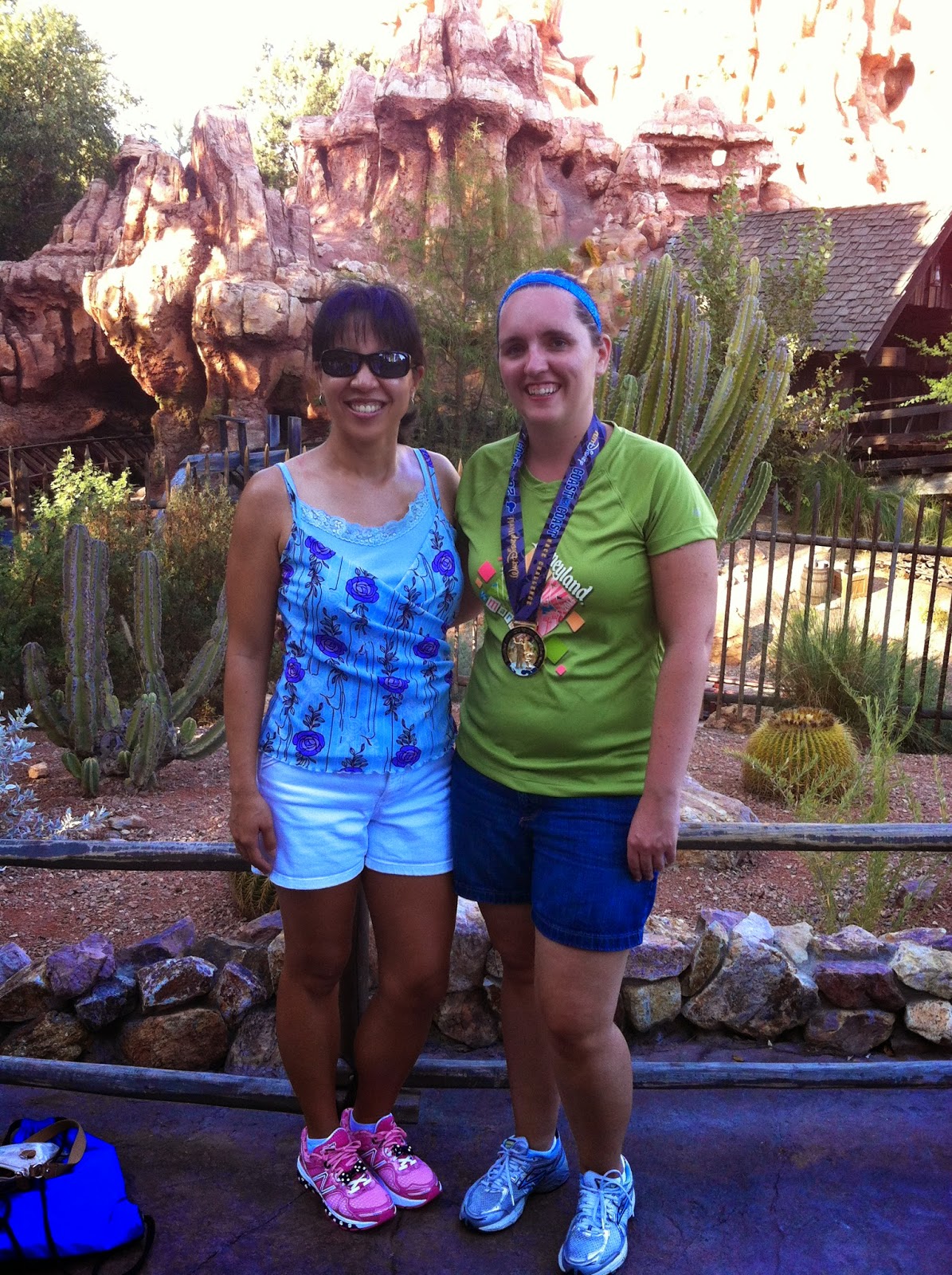 I thought this picture was a great commemoration of all the fun and festivity of the Disneyland Half Marathon weekend. =)

60 days and counting before my next Disney race - the Wine and Dine Half Marathon in Orlando. Yee-haw!!!
Posted by emmers712 at 5:56 PM