Once again linking up with Amanda's Thinking Out Loud Thursdays.

Channeling My Inner Spiderwoman
Last night, Luna Bar hosted a soiree at Brooklyn Boulders Chicago. Prior to yesterday, I've only gone wall-climbing once, back when I was in college. What an adventure it was to try again!

Here's a picture of me getting my climb on: 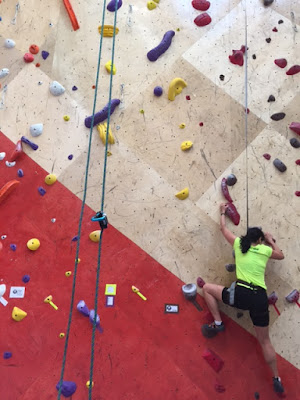 Wall-climbing and bouldering are a lot harder than they look. My arms, back, and especially my hands are all killer sore today. Suddenly it's become difficult to do the little things like open door handles or use soap dispensers. After I got out of the shower this morning, it was a real challenge trying to squeeze the water out of my hair. Yowza!

On a side note, the Brooklyn Boulders Chicago facility is amazing and ENORMOUS. They offer many more fitness options beyond just wall-climbing, too. It is very cool.

Many thanks to Luna Bar and Brooklyn Boulders for the awesome event!

More shoes
I think I may have found a new favorite running shoe. Hello, Saucony Ride 7! 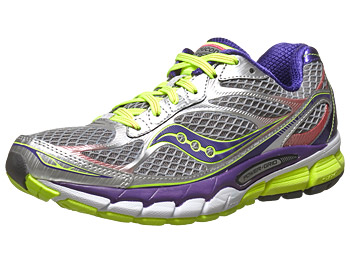 If you're keeping track, my first running shoe love was the Asics Gel Cumulus. I wasn't thrilled with one of the most recent iterations of the Cumulus, which led me to the Mizuno Wave Rider. The Wave Rider is much firmer, which makes me feel like I am more in control of my footstep. However, when doing long runs, I do feel that the firmness can be a little harder on the joints down the stretch. The Saucony Ride is more similar to the Cumulus than the Wave Rider, but is firmer than the Cumulus with more forefoot cushioning.

I am liking the Ride so much that when I saw a ridiculous bargain for them on Amazon, I picked up another pair (shhhhhh...). I've decided that it is imperative to always own a pair of red running shoes. Check out this gorgeousness: 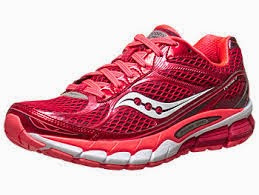 Weed-out
This past weekend, I was in Chinatown and stopped at one of the Asian grocery stores. On a whim, I bought a box of these seaweed snack packs: 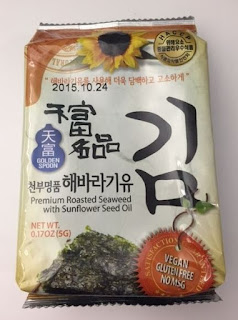 I love the saltiness and crunch! I figured it would take me awhile to get through the box of 16, but I'm already a third of the way through. These might become a new regular on the snack list.

Blackhawks Talk
How about the Hawks' stunning come-from-behind victory last night? Someone on Twitter said, "That was such a Blackhawks thing to do" and I couldn't agree more. The Hawks really have a flare for the dramatic.

I love love LOVED watching Crawford and Vermette doing their post-game press conference in French. I could listen to them speak en Francais ALL day long!

Also, check out this clip of Oduya giving some helpful shoves to Seabrook after Seabs lost a skate blade:

Finally, Teuvo Teravainen looked awesome last night. What an amazing prospect we have in him! He looks like he is about 15 years old, though. He and Brandon Saad are only two years apart in age, but Brandon looks about 20 years older. To illustrate:
Hello Summertime!

What's new with you? Favorite snacks? Biggest plans for the summer? Did you watch the Hawks last night? Current shoes? Too many questions?
Posted by emmers712 at 12:03 PM