After hearing rave reviews every year about the Fort2Base 10 nautical-mile race, I decided to check it out for myself.

The race starts at Fort Sheridan, which was a former Army base and at which an Army reserve complex still operates. The course runs south along the North Shore bike path, and ends at the Great Lakes Naval Base. The 10 nautical-mile distance translates to 11.5 miles.

The race also offered a 3 nautical-mile race (3.45 miles), which started and finished at Great Lakes. 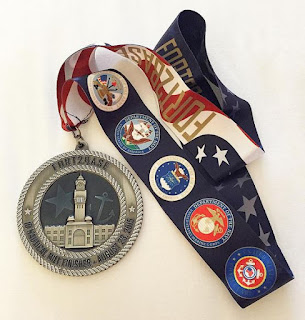 The Bad
The Ugly
My official finishing time was 2:04:15. I had been hoping to break two hours, so I wasn't thrilled with my result. But given the long course and the other challenges, it is what it is. I'll call it giving myself plenty of room for improvement in the future!

I am glad to have experienced Fort2Base and to get such a unique glimpse into two military stations. As always, I tip my hat to all the women and men serving our country. Thank you for all you do!!!

Linking up with Jessica, Mary Beth, and Christina for Race Recaps; and April, Patty, and Erika for Tuesdays on the Run.