I'm no food blogger, but today, I'm going to talk about the weekend's eats. In general, I always want to seek out the places where the locals go - and Memphis had so many amazing choices. It's a wonder that everyone there doesn't weigh 500 pounds, considering the quality of the food.

The Flying Fish
On Friday afternoon, I was wandering around downtown Memphis, looking for a place to grab something relatively quick. I noticed groups of construction workers, police, and businessmen streaming into The Flying Fish. As I walked by, someone held the door open for me, so I decided to go with the flow and head inside. The locals always know best!

I was met by this: 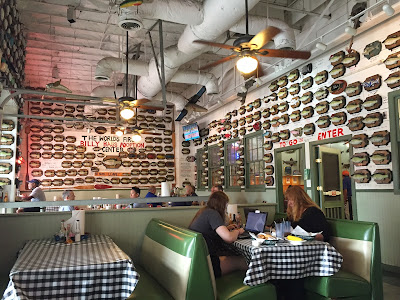 The story is if you bring in a Billy Bass trophy to contribute to their "adoption center," you can get a free basket of catfish, along with your name on a wall plaque. The restaurant promises "to house, shelter, love and protect each ADOPTED Billy Bass." Hilarious!

Here are a few more snapshots: 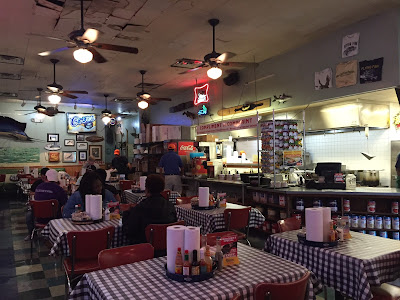 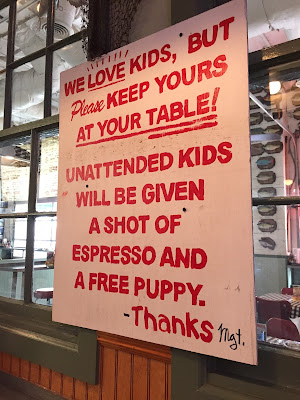 The food was fantastic. They had a terrific selection of very fresh and affordable seafood dishes, with some great healthy options. I had a tough time making up my mind, but ended up getting the grilled mahi mahi platter with sides of beans and rice; and grilled zucchini and squash. Note the ample selection of hot sauces available in the background, too: 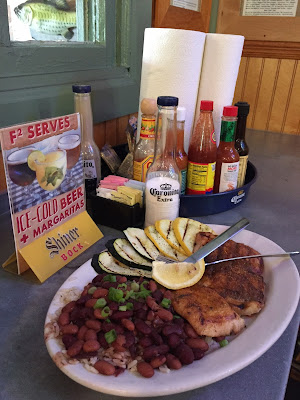 The staff was very friendly and accommodating, and service was quick and efficient. If I ever go back to Memphis, I would definitely be happy to eat here again.

The location, while downtown, was a little hard to find. You had to go into a back alley to find the entrance. It felt a little sketchy. 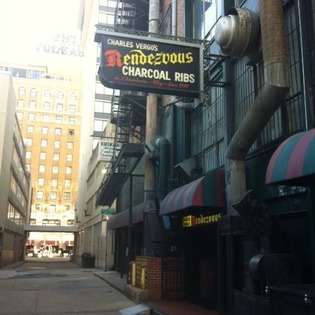 On a contrasting note, there was some beautiful street art on the building opposite the entrance: 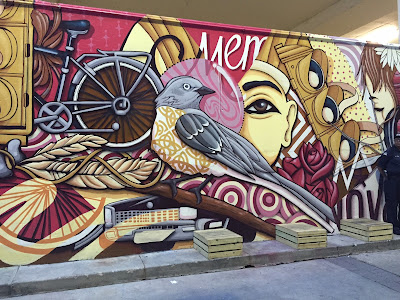 Once inside, you had to go downstairs through a dark hallway into a basement of sorts. Again, it felt a little sketchy. But once inside, the atmosphere was cool. 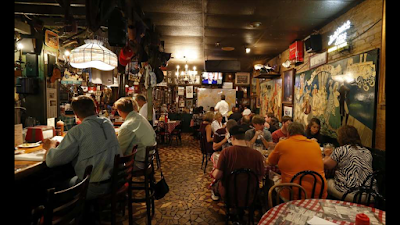 I got a smoked chicken breast platter, which came with rolls and sides of beans and coleslaw. My favorite part of the meal was the in-house barbeque sauce. It was awesome. Too bad the FAA has a liquids restriction for carry-on luggage, otherwise I would have wanted to fill up my entire suitcase with bottles of their sauce. (I learned later that Rendezvous sells their sauces at the airport at locations after the security checkpoint. Someone in their merchandising department is very clever. =) )

The Blue Plate Cafe
Adam joined me in Memphis very late on Friday night. On Saturday morning, we went for brunch at the Blue Plate Cafe, which was a stone's throw away from where we were staying.

The Blue Plate was very homey, cute, and pleasant with lots of unique artwork adorning the walls. The crowd was a nice mixture of families, couples, and groups. 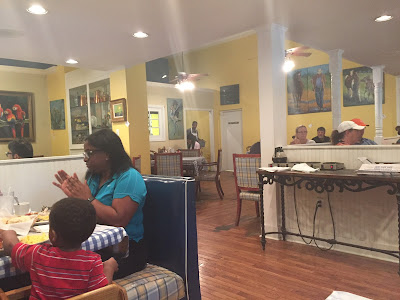 The food was tasty, very Southern, and enormous. (Adam ordered unsweetened iced tea, and we were joking about how this automatically branded us as heathens!)

The biscuits and gravy were true standouts, in my opinion. Everything was fresh out of the oven. 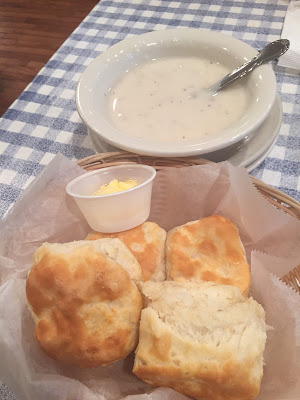 Adam noted that contrary to the name, the restaurant didn't actually serve their food on blue plates. =D That aside, we both enjoyed the food and service very much and walked out with an enormous box of leftovers. We were lucky we had arrived when we did, too, because as we were leaving there was a long line of folks waiting to be seated.

The Trolley Stop
After visiting Graceland on Saturday afternoon, we were looking for a place to grab a quick bite before heading to Sun Studio for a late afternoon visit. The Trolley Stop fit the bill perfectly. It was a very cute combination bar/restaurant/bakery/marketplace which featured local farmers' wares. As the name implies, it was close to one of the Memphis trolley stops. 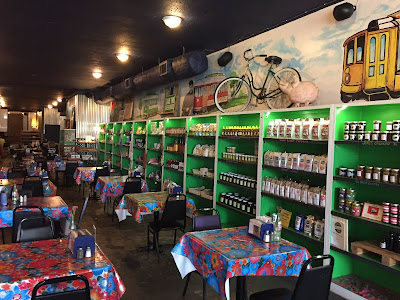 The menu was very diverse and had an ample selection of healthful dishes. It can be so hard to find menus with lots of healthy choices, so I was thrilled at the range of options. I loved the vibe and the laidback atmosphere. Adam and I shared a salad and a barbeque chicken pizza, and both were excellent.

If I had more time and more room in my stomach, I would have liked to peruse some of the store offerings plus the bakery, too!

BB King's
Adam and I wanted to go to Beale Street on Saturday night to listen to some live blues. We decided to do double duty by having dinner at BB King's at the same time. 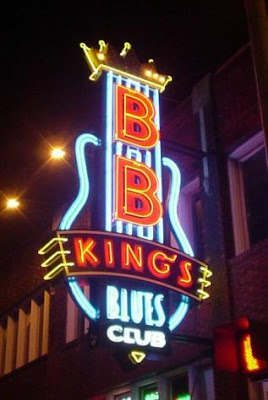 BB King's had launched a new menu a few days before we were there. I went back and forth on whether to order a shrimp and grits dish versus getting a barbeque chicken dish. The waitress, who was very friendly, warned me that the shrimp and grits were very spicy. I don't have much spice tolerance, so I went with the chicken, which came with sides of mashed potatoes and collard greens. The chicken was good, but in retrospect, I probably should have taken my chances with the shrimp and grits. Note to self for next time.

Adam got a brisket platter, which came with a roll and a side of beans. His brisket was some of the best I'd ever had in my life - it was so tender it literally melted in your mouth. Yummy!

Central BBQ
I had heard Central BBQ was a joint that was frequented by lots of locals. It is very close to the Civil Rights Museum, so it was the perfect place to have lunch before going to the museum on Sunday afternoon.

Once again, I loved the laidback, down-to-earth atmosphere filled with happy people chowing down: 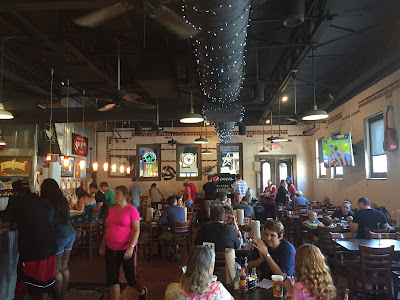 I got the smoked turkey platter, a side salad, and a banana pudding: 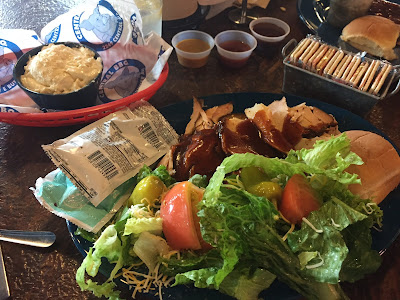 The platter came with mild BBQ sauce. You can see in the picture that I also tried a few of their other sauce offerings (a mustard sauce, a vinegar sauce, and their "sweet heat" sauce). I liked every one and it was a toss-up between the mustard and the vinegar for my favorite.

Adam got the brisket platter with sides of green beans and mac & cheese: 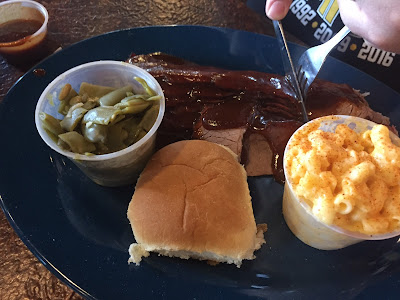 The barbeque dishes were both very delicious, but the mac & cheese and the banana pudding were both incredibly, exceptionally, extraordinarily good. I could have eaten both of those alone and gone home deliriously happy. I am now on a critical mission to recreate that banana pudding at home in my own kitchen.

That concludes the weekend's eats. Thank you, Memphis, for being so hospitable and for all of your amazing food!!! Until the next time, I'll be ready with my stretchy pants. =)

--
I am inaugurally linking up with Jenn, Arman, Meghan, and Laura for What I Ate Wednesday. 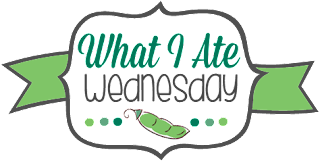