I have a lot to share about my weekend travels to Memphis. 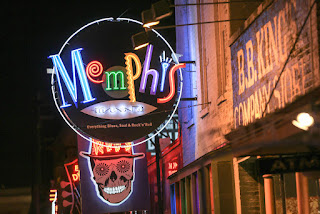 There's way too much to cover in a single post, so I'm going to do a two-part series. (Yes, it's Two-Part Series Week for me since I'm also writing up the Nike Unlimited Chicago Decathlon in two parts!)

Today, I'm going to talk about the local sights/sounds I experienced in Memphis. In a separate post, I'll cover the Memphis eats.

Let's get started on the sights and sounds!

The Peabody Hotel
The Peabody Hotel was my first stop when I started exploring downtown Memphis. It's a historic luxury hotel that is famous for the Peabody Ducks, which live on the hotel's rooftop. Every day, the ducks are led by a Duckmaster on a march to and from a large fountain in the lobby. During the days, they spend their days splashing around and living the duck life in high luxury.

I didn't see any of the ducks marching, but I stopped by during the daytime to see them in their "office." They are very cute!
Rock N Soul Museum
This museum, which was developed by the Smithsonian Institution, showcases the stories and history of many pioneers in the Memphis music industry.

I learned so much from visiting the Rock N Soul! It was enthralling to discover more about the economic, racial, and social obstacles the musicians faced along the way. Those musical artists have had an enormous impact upon modern-day culture and society. I also loved that the museum had dozens of local artists' songs available for visitors to listen to. The audio selections really helped enrich the experience.
Graceland
Thou shalt not go to Memphis without visiting Graceland, the home of Elvis Presley. Admittedly, I considered skipping Graceland because I thought it would be very touristy and kitschy. However, I ended up enjoying my visit tremendously. Elvis was such an iconic figure in history, and Graceland was a fascinating glimpse into his life.

Here are a few of the rooms in the Graceland mansion: Elvis's grave is onsite, as are graves for his mother, father, grandmother, and brother. Many visitors paid extremely solemn homage to the grave sites. 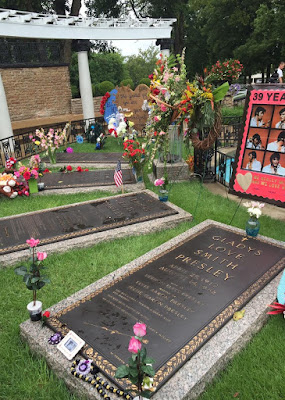 The premises also included displays showcasing the hundreds upon hundreds of awards he received for his music.
My appreciation for Elvis's music has definitely increased after visiting Graceland! My newly identified favorite Elvis songs include Suspicious Minds and Hunka Hunka Burning Love. SIDE NOTE: Lilo and Stitch is one of my favorite movies, and the latter is inspired by this scene:
I also love this remix of Blue Suede Shoes, which was being played at one of the Graceland displays:
Sun Studio
This is a legendary recording studio at which dozens of famous musicians recorded their works over the decades. Examples include Johnny Cash, Roy Orbison, Jerry Lee Lewis, and Elvis. Sun Studio remains as a working recording studio to this day, and continues to play host to both superstars and rising amateurs.
Beale Street
The famous neon party street and the center of music and entertainment in Memphis. Beale Street has a lot of storied history dating back to the early civil rights movement.
Admittedly, I've heard the Beale Street venues are considered very touristy and that you needed to venture outside of downtown to visit the true local clubs. But when you're in town for the first time, you still gotta check it out, yes?

Side note - Beale Street had a heavy police presence when Adam and I were there on Saturday night. At some point in the evening, folks had to go through security and pay a fee to enter the area. (Apparently some portion of that fee could be credited for use in certain venues.) We later learned that there has been some recent gun violence on Beale Street leading to the increased security measures. As a result, the restaurants and clubs were not very crowded.

BB King's Blues Club
There were dozens of blues clubs and other music venues to pick from on Beale Street, but I had heard good things about BB King's. I definitely wanted to check out the namesake of the famous BB King.

Here was our view of the performance stage: 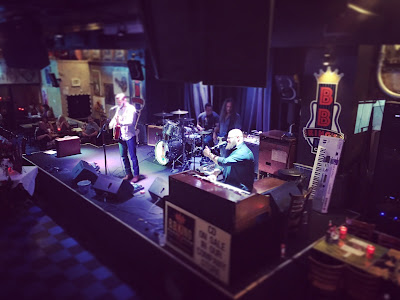 Civil Rights Museum
As the name implies, the Civil Rights museum chronicles the history of the Civil Rights Movement. The museum was built around the former Lorraine Motel, the site of Martin Luther King Jr.'s assassination. The Motel has been designed to maintain its same appearance from the time of murder.

As a child growing up, I had learned about the civil rights movement in history class. However, I realize now how much I did not comprehend as a child. The exhibits were incredibly moving and really drove home the magnitude of the struggles. It made me contemplate how our society simultaneously lives in very progressive times while also remaining plagued by ongoing centuries-old challenges.
I think this museum should be a requirement for all Americans to visit. It was one of the most impactful sights I've ever seen.

...and that concludes my recap of the weekend's sights and sounds! Coming up: The Memphis food.

--
I will be inaugurally linking up with Chris and Heather; Lauren; Ashley; Amanda and Brian; and Carolann and Macrae for Weekend Wanderlust.