Hi friends! Adam and I got back from Europe yesterday afternoon. We were both up and at 'em at 4 AM this morning due to jetlag. It was really nice to be able to knock out an early-morning run without having to drag myself out of bed. In a perfect world I'd hold on to this schedule. But in reality, I know I'll be back to my normal schedule within the next couple of days. Ah well...

The travels to Budapest, Prague, and Vienna were very enjoyable. I have so much that I want to share. And thus begins the challenging process of reflecting and trying to put all the experiences into words and pictures. All around, I am officially in major catch-up mode.

In an attempt to keep things somewhat manageable, I'm going to recap each city individually and in chronological order.

Let's get started with Budapest.

I wasn't quite sure what to expect from Budapest. In summary, I found it to be a very beautiful, walkable, livable city. Several travel experts had described it as a hidden gem. Indeed, it has not yet been hit by the mass tourist crowds. However, I strongly expect that will change in the near future as people discover its offerings.

Are you ready for an outpouring of photos? Brace yourselves...

Castle Hill
As the name implies, the area where the Castle is located is called Castle Hill. It includes a bevvy of Baroque architecture, Gothic arches, museums, shops, and restaurants. Adam and I spent an entire afternoon walking around and soaking it all in. Here are some scenes:
The Great Synogogue (aka the Dohány Street Synagogue)
Budapest's Dohány Street Synogogue is the second-largest Jewish house of worship in the world behind New York. Adam and I took a tour of the synagogue, grounds, museum, and surrounding sites, which included a former World War II ghetto, mass graves, and Holocaust memorials.

The outside of the synagogue: 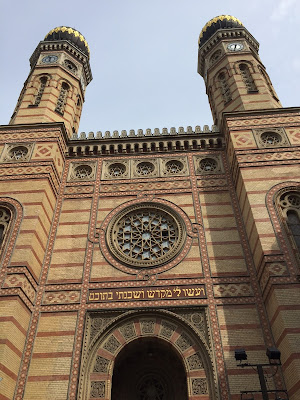 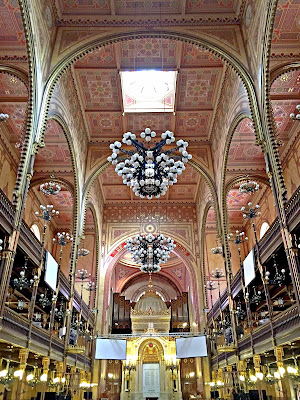 During our tour, we also visited the nearby Rumbach Street synagogue - here is its interior: 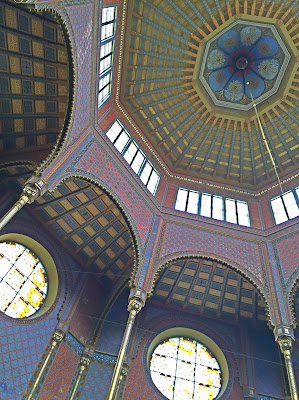 As you might expect, the Holocaust themes were sobering. In the former ghetto, we saw where groups of 30-35 people were forced to live in a single 1-bedroom apartment. Similarly, I didn't take pictures of the mass graves out of respect, but it was heartbreaking to see the hundreds upon hundreds of memorial symbols standing upon each grave site.

These are two of the many Holocaust memorials: 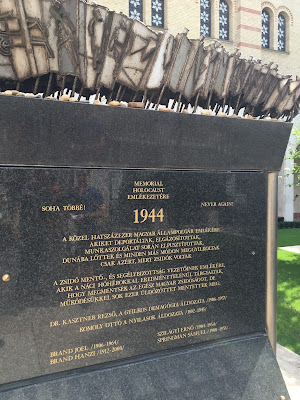 Side note: Our tour guide was quite an interesting man. He was 98% blind, was originally from Brooklyn, and spoke with a thick New York accent. He was quite knowledgeable while also being humorous. He joked about being able to conduct the tour despite his vision impairment since the buildings never moved (unlike the tourists). In retrospect, I wish I had gotten a picture of him because he is the first thing I remember.

Parliament
Adam and I spent some time hanging out in the neighborhood surrounding the Hungarian Parliament Building. The atmosphere reminded me a lot of Washington DC.

Unfortunately, we didn't have time to tour Parliament, but we did enjoy seeing the gorgeous building. It was also fun to observe all the locals striding around purposefully on the surrounding sidewalks.
Thermal Baths
Budapest sits on a group of of thermal springs, and visiting the thermal baths is extremely popular. Adam and I had to be careful when selecting a thermal bath to use, as certain spas have gender-specific admission days (e.g. men on Mondays, women on Tuesdays, et al). We decided to visit the Gellért Baths (which had recently gone co-ed 7 days a week) based on rave reviews of the cathedral-like setting.

I didn't take any pictures at the baths. Therefore, here are some pictures from the Gellert Baths' website:
The thermal baths were probably my favorite of all the activities we did in Budapest. It was heavenly to relax in the hot spring water amidst such pretty backdrops.

Food
Adam and I didn't do anything fancy for most of our meals, but we had dinner at one restaurant in particular which was noteworthy. It is called Karpatia and was recommended for its ornate decor and affordable local Hungarian dishes: 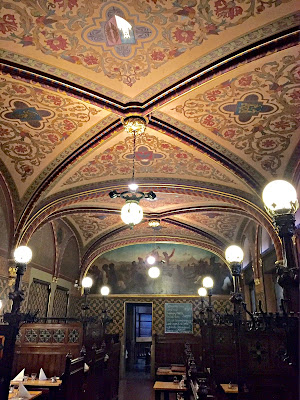 Adam and I tried some Hungarian goulash soup and Hungarian stew, among a few other items. Everything was delicious. Here's a picture of the stew, which came with a side of potato dumplings: 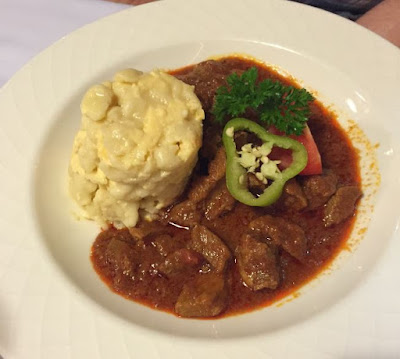 Public Transit
As I've mentioned before, I like riding public transit when I'm traveling because I think it gives a nice sense for local life. Budapest's transit system is outstanding. It really puts Chicago's systems to shame.

From the Budapest subway:
Everything else
I had mentioned Budapest is a very walkable city. The streets are filled with squares, outdoor cafes, and people milling about. Here's a picture of Váci utca, which is one of the lively main pedestrian streets: 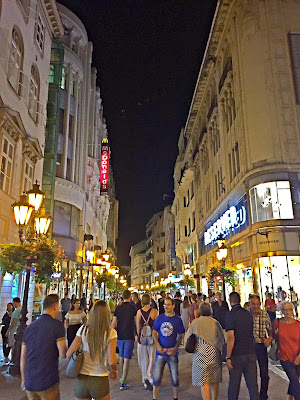 The love for local sports is alive and well: 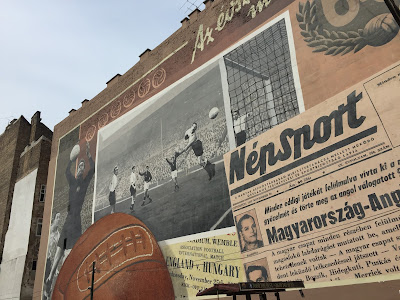 Since Budapest straddles the Danube River, it's got a lot of bridges. Here's one example: 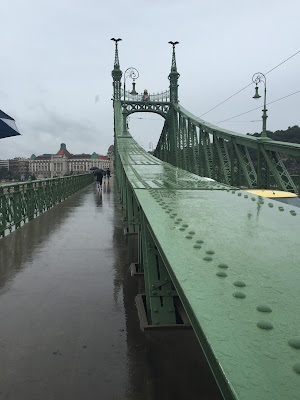 Adam said Budapest's bridges reminded him of his hometown Pittsburgh.

The landscape even includes castles built into the hilltops: 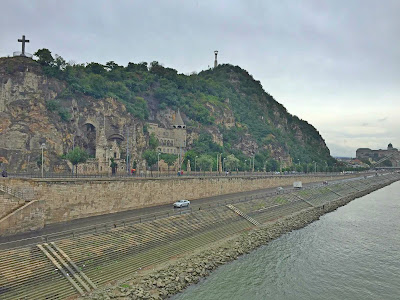 It looks like Budapest was hosting a White Party when we were there: 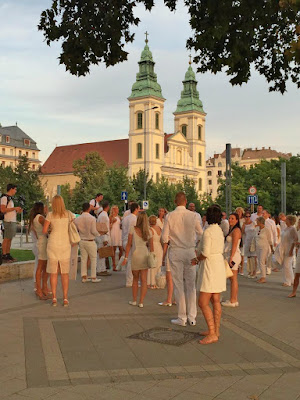 Hungary is famous for its paprika, and sure enough there were ample opportunities to buy it: 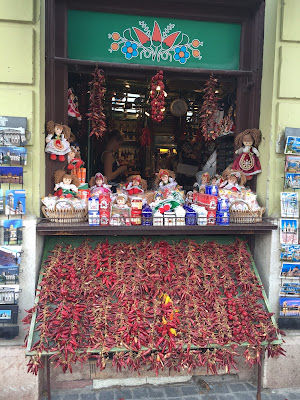 And finally - just to cap off how beautiful Budapest is, even their manhole covers are artistic: 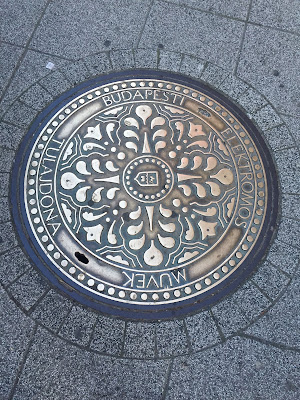 WHEW!!! That is definitely enough pictures for today, yes? Thanks for sticking with me if you made it this far!

All in all, I thoroughly enjoyed the two days in Budapest. The explorations there went by very quickly before it was time to head to the next destination.

Coming up: Two days in Prague

Linking up with Chris and Heather; Lauren; Ashley; Amanda and Brian; and Carolann and Macrae for Weekend Wanderlust.