After visiting Budapest and Prague, with an adventurous train ride in between the two, Vienna was the last stop.

When I think of Austria, the first thing that comes to mind are famous classical musicians like Mozart, Strauss, and Schubert. I also think about The Sound of Music, strudel, schnitzel, and Arnold Schwarzenegger (I know, I know). Based on pictures, I knew Vienna was a beautiful city, but beyond that I wasn't sure what to expect.

In my experience, I found Vienna to be simultaneously very sophisticated while also being very pleasant and livable. That's a tough combination to master, but Vienna did it with ease.

Before I continue - I need to give a shout out to Adam's colleague, Deepthi. She studied abroad in Vienna a few years ago, and gave us a list of local recommendations which were amazingly helpful. Many thanks, Deepthi!!!

Here are highlights from the time in Vienna. [Once again, cue the onslaught of photos.]

Stephansdom
St. Stephen's Cathedral was a gorgeous example of Gothic architecture. It was the epicenter of activity in Stephansplatz (the central square in Vienna), and drew enormous crowds. 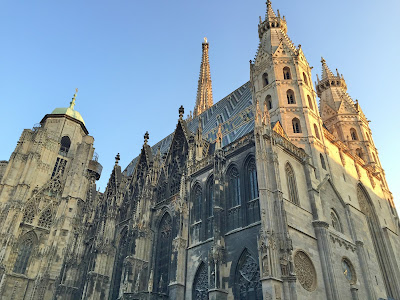 Adam and I went up to the top of one of the towers. Here's a view of the Stephansdom's stunning tiled roof, which depicts the coats of arms for both the city of Vienna and the Republic of Austria. Suffice to say, this is the most patriotic roof I've ever seen. 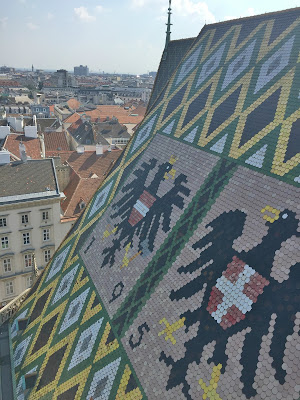 Here is the view of the Vienna cityscape from the roof: 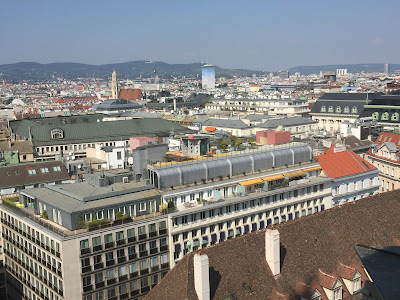 The inside of the cathedral: 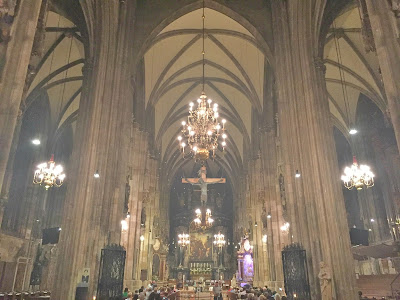 One of the religious artifacts inside the cathedral: 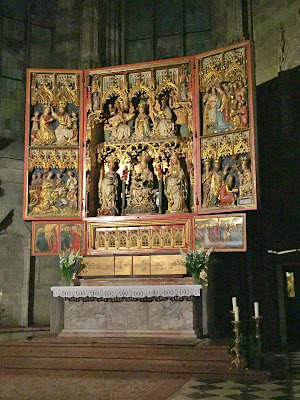 Schloss Schönbrunn
I had commented to Adam that seeing all the castles in Budapest and Prague was making me feel like a peon. The jawdropping palaces in Vienna sure did not help that cause. =)

The Schönbrunn Palace is a former summer imperial residence in Vienna. Here are some outside views from the palace gardens: 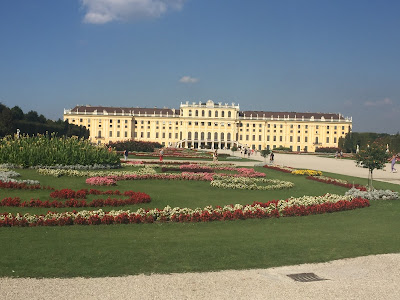 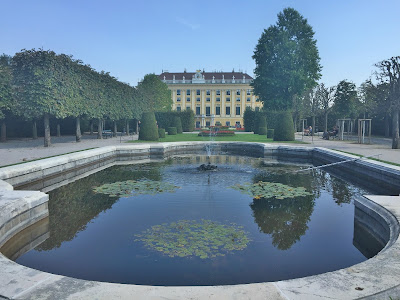 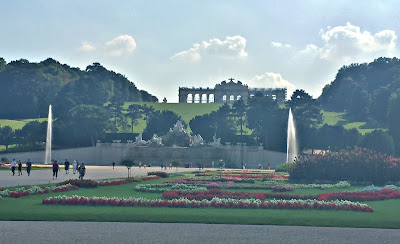 The palace has 1,441 rooms (yes, I looked it up just now). Adam and I did a self-guided tour which took us through 40 rooms. Just seeing those 40, it got to the point where I thought they were going to run out of names for each room.

We weren't allowed to take pictures of the inside, so here are a couple of pictures from the Schonnbrunn's website:
As you can tell - the rooms were extremely lavish. Definitely fit for royalty!

Naschmarkt
The Naschmarkt is an open-air market with an enormous range of local food, shops, restaurants, and cafes. This was my favorite of everything we saw and experienced in Vienna. I loved exploring all the colorful aisles, hanging out at the outdoor seating areas watching the world go by, and mingling with the locals.

Here are some snapshots of the food and produce: 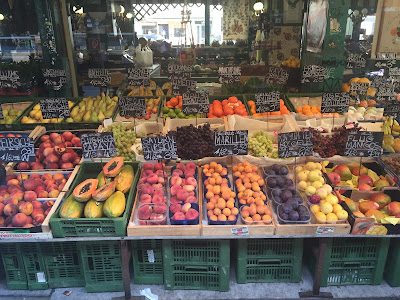 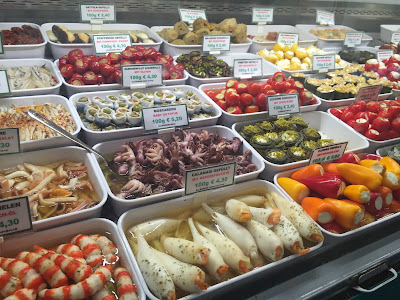 A view of some of the restaurants with their outdoor seating: 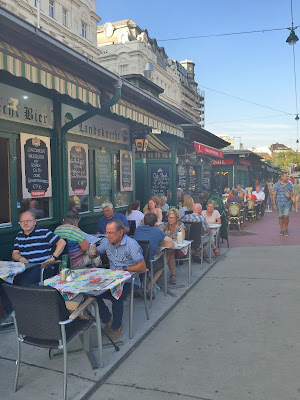 Adam and I popped into one of the cafes. Here he is enjoying an Eiskaffee, which was essentially iced coffee mixed with an enormous scoop of ice cream and whipped cream. Not surprisingly he said it was the best Eiskaffee he's ever had. =) 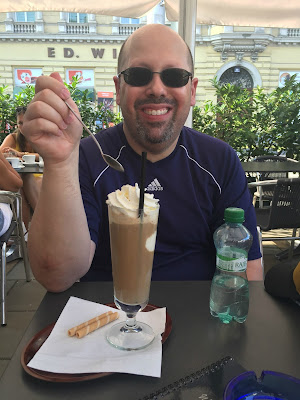 I had an apfelstrudel with vanilla sauce, which was so delicious. (I included a picture of it below under "Food.")

SIDE NOTE: I took 4 years of German in high school. I was really happy to be able to dust it off and use it in Vienna. I know I speak with a ridiculously strong American accent and I probably butchered my grammer and tenses to complete oblivion - but in the end, I was able to communicate. Yay!

Concerts
Vienna is very famous for its fine arts. Sure enough, opportunities to see classical concerts and other theatrical productions in Vienna abounded everywhere. It was by far the biggest and most prominent fine arts scene I've ever experienced in any city. We were in Vienna for three nights and saw a show every night.

During the summer, the Vienna State Opera House was broadcasting live opera productions on a big outdoor screen. We caught a viewing of Madame Butterfly (what a tragic opera, wow!) amidst a large crowd of folks. 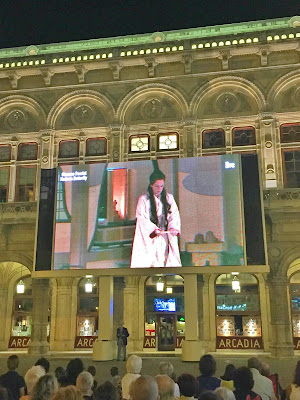 We saw a string quartet at the Palais Schönborn: 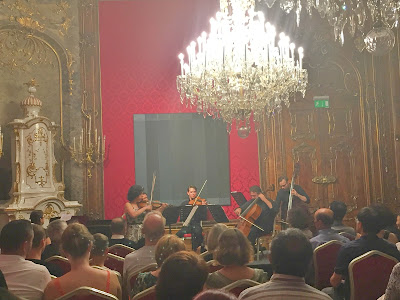 and we saw a Vivaldi concert at the Stephansdom: 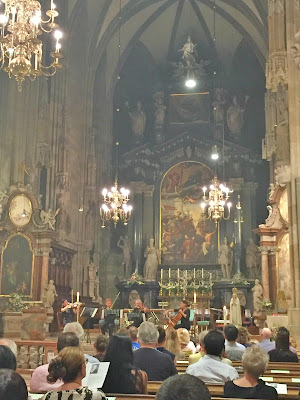 Adam and I wanted to see a production at the Burgtheater, which we understood to be a world-reknown venue. However, during our visit the Burg was showing a comedic German play. Since we wouldn't understand the play, we opted instead to take a tour of the theater. The first word that comes to mind when describing the theater is "regal." 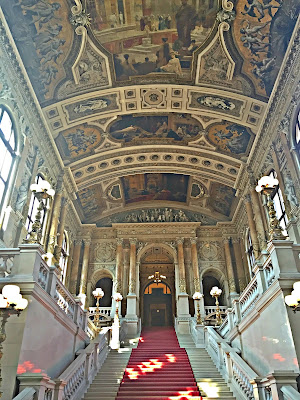 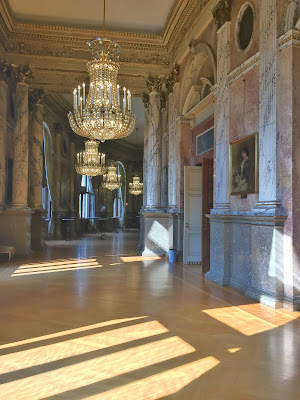 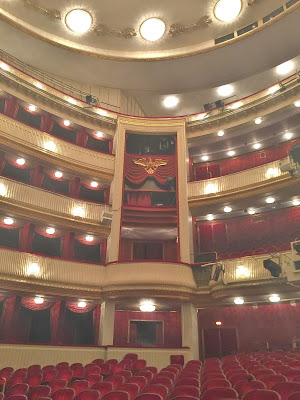 Our Burgtheater tour guide was exceptionally knowledgeable. She knew everything about every single nook and cranny, and even explained the behind-the-scenes production operations. It was an extraordinary learning experience.

Mozart
I took piano lessons for almost 20 years growing up, and Mozart was one of my favorite composers. It was fun seeing all the homages to him around Vienna:
Food
Adam and I went to a local restaurant called Lugeck to try some classic Austrian food. When in Wien, of course you have to try the wienerschnitzel: 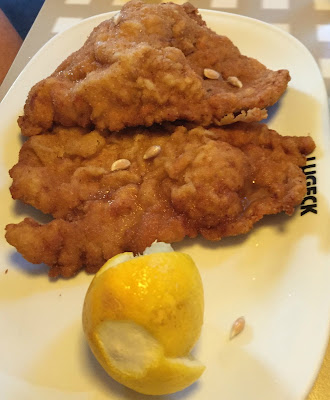 We also tried some "Emperor's goulash" with spaetzle: 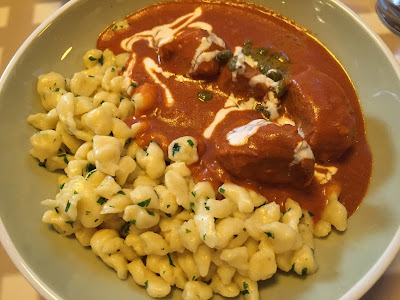 Thou shalt not go to Austria without splurging on a Sachertorte from the Hotel Sacher: 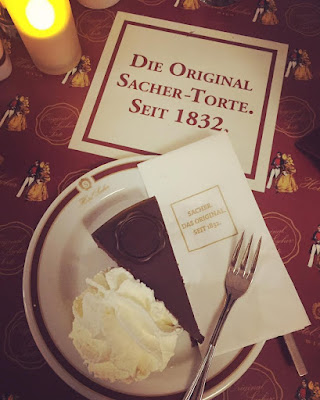 and as I mentioned above, I got an apfelstrudel with vanilla sauce, which was spectacular. It was easily the best thing I ate in Vienna. 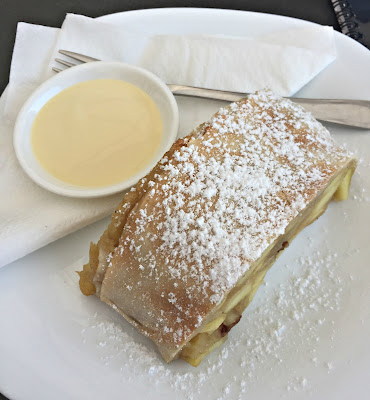 Other architectural scenes
Here are a few other examples of the beautiful city architecture and scenes:
Everything else
We ran into a lively street party in one of the squares, hosted by the Viennese firefighters:
and finally, since I shared snapshots of the public transit and the manhole covers in both my Budapest recap and my Prague recap, here are the Viennese versions: 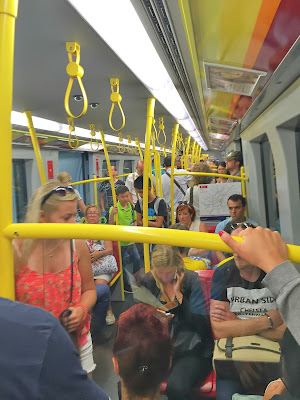 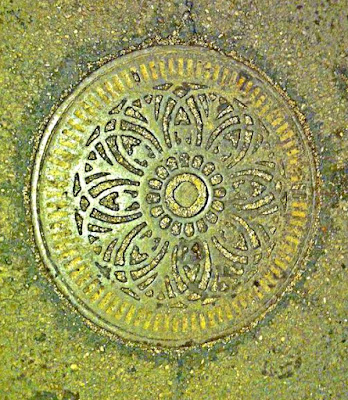 In summary, I really enjoyed the time in Vienna and felt very comfortable there. The fine arts influence was spectacular. I thoroughly admired the fabulous mix of old-world and new-world that the city displays so effortlessly.

...and that concludes my travel recaps from this vacation!!! Have I bombarded you with so many pictures that your head is spinning? As per usual, thanks for reading through if you made it this far. 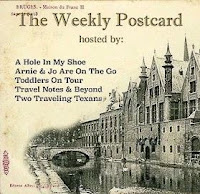