All is quiet on the running front.  This is a good thing.  Just to summarize this past week, I ambitiously did two short tempo runs, and also got an 11-miler in yesterday which went swimmingly.  Experimenting with my new CEP compression sleeves, though no solid opinion on them just yet.  Anxiously awaiting the arrival of my new Brooks Glycerin 8 shoes.

Since it's a slow running-blog day, we'll tackle some tangents.  Let's talk about the foods that we crave post-run (or whenever).  I have both a sweet tooth and a salt tooth, but if you held my feet to the fire I would have to say my salt tooth is actually the more dominant between the two.  After runs I prefer to eat something salty - a big favorite post-run snack is toast slathered with hummus.  I actually wish that they would invent GU or Clif Shots or other energy gels in savory flavors, rather than all the candy-like flavors.  I probably wouldn't mind savory sports drinks, too, if done right (e.g. tomato juice-flavored, perhaps?)

On the topic of savory foods, probably the top food that I crave at ALL times is Chicago-style deep dish spinach and mushroom pizza. 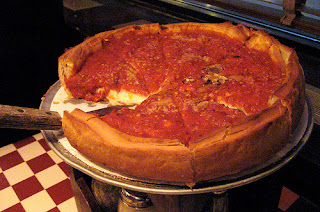 I am sorry, New Yorkers, but I am not into the thin-crust pizza that you can fold in half where one person can finish an entire 36-inch diameter pizza by him or herself.  I believe pizza should be eaten with a knife and fork.

There is great debate amongst Chicagoans regarding which of the deep dish pizza places are the best.  I will add my opinion to the mix here.

My Personal Favorites (in no particular order)

WARNING: Regardless of which deep dish pizza place you go to, be aware of your public safety when transporting a box of freshly baked deep dish pizza in public.  You WILL get mugged, especially in broad daylight when there are lots of crowds around.  There is some statistic that a large percentage of crimes occur within a close radius of your home.  Case in point, I've been nearly attacked by would-be pizza thieves and their dogs and toddlers several times in my building's elevator, just steps away from my front door.


There is only one guaranteed and proven way to bypass the high risks of pizza transport thuggery - and that is to carry the deep dish pizza inside your stomach.