The stage has been set: an Original Six Stanley Cup Finals matchup between the Chicago Blackhawks and the Boston Bruins, starting tomorrow.  WOO HOO!

I've lost a couple years of my life watching my beloved Blackhawks in this year's Stanley Cup playoffs.  First, the insane Game 7 overtime win in the second round against Detroit.  Then, the unbelievable Game 5 double-overtime victory against the Kings this past Saturday.  STRESS.

Playoff hockey is not for the faint of heart.  But I wouldn't have it any other way.  It's tradition! 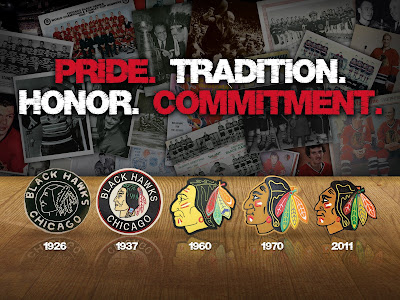 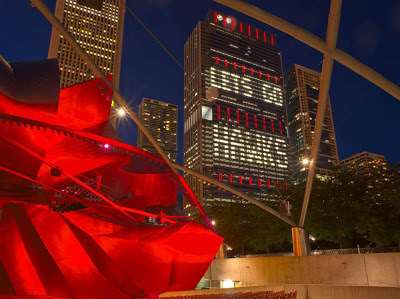 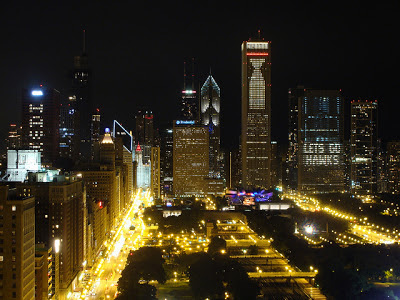 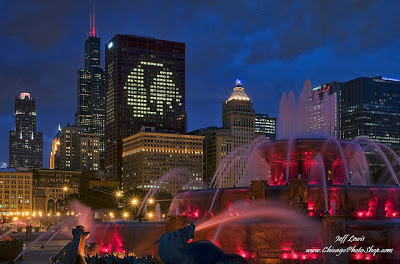 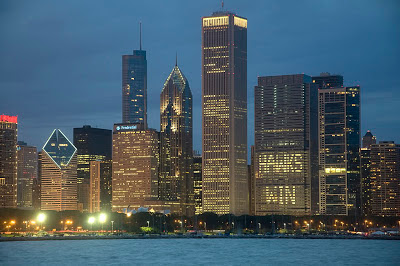 Ticket prices to attend the Stanley Cup Finals at the United Center are OBSCENE.  Just for giggles, I took a look at some of the ticket resale websites.  The standing room tickets are starting at about $250 apiece and the nosebleed seats start at about $375 apiece.  I've heard stories of fans so desperate to get tickets that they offered to sell their iPads, usage of their apartments, wedding photography services, and even their blood (literally) to get tickets.  Wow.  As I've said many times, I am as rabid of a Hawks fan as you'll ever find anywhere, but even I will be watching the Finals from my couch.

I do wish that the Hawks or the city of Chicago would offer the option for fans to camp out and watch the games outdoors on a big screen outside the UC or at, say, Grant Park.  The Penguins have outdoor viewing parties in Pittsburgh and I think they would be the coolest thing ever, especially on a beautiful summer evening.


Allright, let's get down to business here.  The Blackhawks and the Bruins are an incredible matchup and I could go on for hours about the nitty-gritty details.  But I'll try to keep it high-level here.  I will also try not to be TOO biased.  (I know, I know.  But it's the thought that counts.)

Forwards
While the Bruins have some very talented forwards in Patrice Bergeron and company, I think the Hawks have more depth at forward.  Especially when you consider the Hawks' incredible "third"-liners, most notably Bryan Bickell, who has had an absolutely explosive playoff season.  Consider the fact that the Hawks are in the Stanley Cup Finals and I think Jonathan Toews has only scored one goal this entire postseason.  Now THAT is depth.

Defense
The Hawks will certainly have their hands full dealing with the likes of Zdeno Chara in all of his 7-foot monstrosity.  But again, I think the Hawks have more depth at defense with their Olympic-caliber pairings, and I tend to feel that the Hawks' defense has a bit more of a scoring touch.

Goaltending
From a goaltender standpoint, both Tuukka Rask and Corey Crawford have played stunningly well - but even Adam will admit in his Penguins post-mortem that the Penguins made life too easy for Tuukka in the Eastern Conference Finals.  I think Corey has more battle wounds so far this year, which is a good thing.  But between Corey and Tuukka it'll definitely be quite an exhibition of goaltenders.

Commercial Break
Check out this cute picture that was posted on the Blackhawks Facebook page. 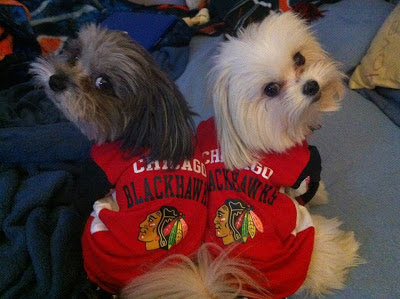 And how about this adorable picture of my fellow Hawks fan/running blogger Bobbi and her mom's dog, Brie? 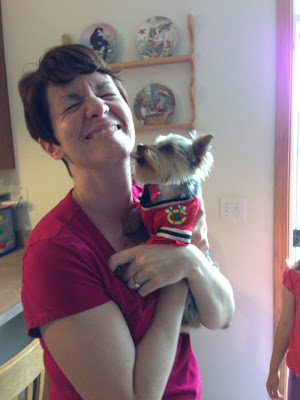 Another photo of Brie: 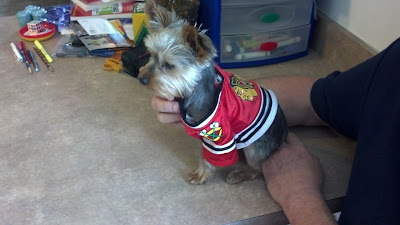 I think I could do an entire photo-blog post on pets supporting the Blackhawks.  =D
Tangential note - I participated in the PAWS Run For Their Lives 4K Walk this past weekend and had an absolute blast.  More details and pictures to come in an upcoming post!

And now, back to your regularly-scheduled programming.

Special Teams
Both teams are strong penalty killers.  However, the Hawks' penalty kill has been nothing short of astounding - they are 58 for 61 in the playoffs, which I heard is a 25-year record.  Both teams have struggled on the power play, too.  I still don't understand how teams with so much talent can struggle so mightily with the man-advantage.  It's one of the great mysteries of the hockey universe.  In the end, I think that converting on power plays may end up being the difference-maker in this series.

Coaching
Joel Quenneville and his team are phenomenal and the Hawks are exceptionally well-coached.  Claude Julien has had his ups and downs in Boston, but he and his team are also very well-respected and experienced.  Obviously both head coaches have already taken their respective teams to a Stanley Cup championship within the last 3 years, so they both know what it takes.  I don't know Claude Julien's coaching nearly as well as Coach Q, but I do feel that Coach Q is more willing to take risks and mix things up on the fly, as needed.

Side note: Not surprisingly, I would love to see the Hawks win a championship on home ice.  Living so close to the United Center and given the opportunity, I thought it would be fun to go partake in the outdoor jubilation nearby.  (When I mentioned this to Adam, he said "You mean the riots?")  However, as it turns out, Adam and I are going to be out of town the weekend of Game 5.  Talk about timing.