Erin has been taking trapeze classes for a few months, and I've always gawked at the pictures from her amazing aerial stunts.  So a few weeks ago when Erin asked if anyone would be interested in going to a trapeze class with her, I jumped at the chance.  I am all about trying new things when given the opportunity!

Last Friday I joined Erin for my first-ever trapeze class from Trapeze School of New York-Chicago.  They have both an indoor and outdoor location.  Given that it is after Memorial Day I couldn't resist going to their outdoor classroom at Belmont Harbor.


I thought that newbies such as myself would be moved through the equivalent of the bunny hill at a ski resort, but not the case!  Right away you are getting safety harnesses and belts wrapped and strapped around you, given a whirlwind of instruction, and climbing up a tall ladder to the platform.  I was feeling pretty confident until I got to the platform and looked down.  That was when the magnitude of what I was doing really hit me.

For me, the hardest part was when you are getting set to jump and you have one hand on the bar, but then have to reach out with your other hand to grab the bar.  Here's a picture of me at one of those moments.  (All of the trapeze photos are courtesy of Erin's husband, Jason.) 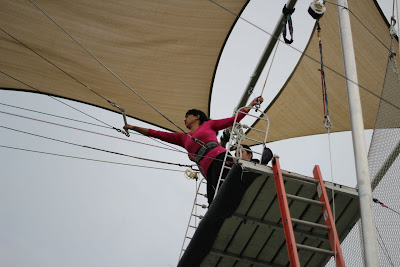 The bar and rope are quite taut.  Therefore, I feared I would miss grabbing the bar with my other hand and then be pulled off of the platform from my right hand and go tumbling into the net face first.  They do have someone there holding you for security, but it's still scary.

It was also scary jumping off the platform and feeling the free-falling sensation for those first few moments.  They have instructors down at ground-level shouting instructions at you the whole time, too.  The combination of trying to focus on what you were doing on the trapeze and fighting against your screaming muscles while simultaneously listening to the instructions was quite challenging!

The trapeze moves turned out to be both easier than expected, as well as harder than expected.  I learned how much the moves are about timing and momentum, rather than about physical strength (although physical strength was definitely a HUGE factor, too).  But right away we were hanging from our knees and doing flips and catches.  It was exhilarating but also very tiring!

Here are a few more pictures: 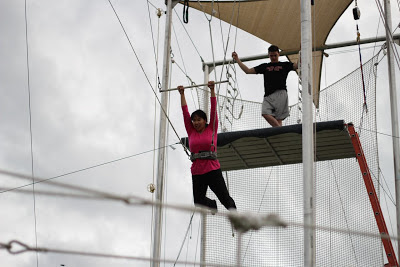 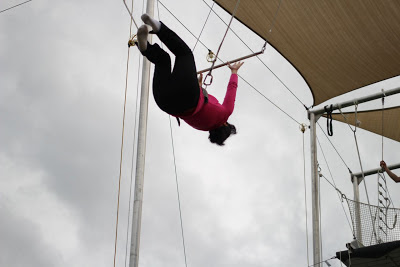 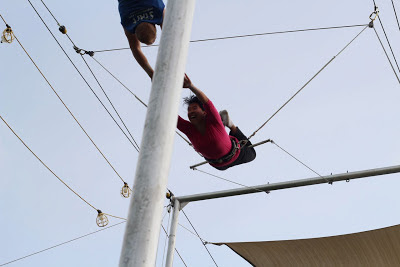 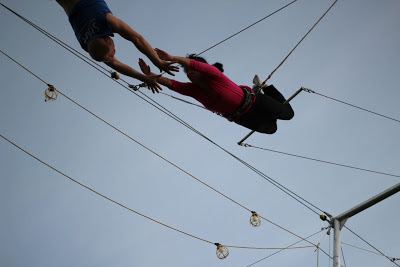 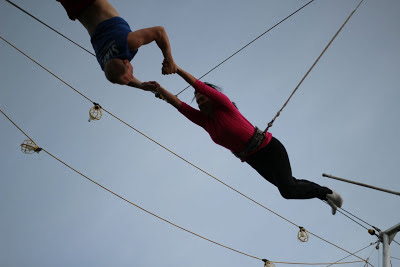 During class, my hands, arms, and back were burning from the exertion.  Even today, almost 48 hours after trapeze class, pretty much my entire upper body is sore, including my abs and my neck.  It is quite a workout!

I have so much more respect now for the trapeze artists that you see at the circus or at aerial shows like Cirque do Soleil.  They make trapeze look so easy when it so, so, SO challenging.  WOW.

All in all, I am very glad that I tried trapeze (thanks again, Erin!)  The jury is still out on whether or now I would ever do it again, though (as I slunk around the house in a state of post-apocalyptic and near-paralytic soreness.)  Clearly I would have some body-building that I would want to focus on first. 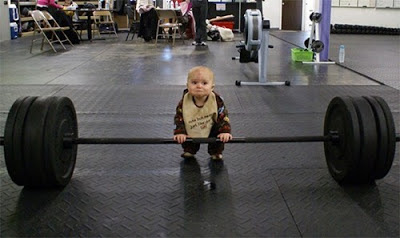 Moving on to other fun parts of the weekend!  Yesterday I joined Kim, Xaarlin, and Xaarlin's dog CB at the Chicago Veggie Pride Festival and Parade.  Kelsey came by to say hello, too.  (Admittedly I am not a vegetarian, but I very much support those that are and I like going meatless a few times a week.)  We had a great time hanging out and catching up.

A life-size cat costume may have been involved.
﻿﻿﻿﻿

Here's a great split-image photo which looks like it could have been Photoshopped, but really hasn't.

OK, that's enough adventurousness to last a weekend or two.  I'm off to lay on the couch for the rest of the day.