Half marathon #9 is in the books. 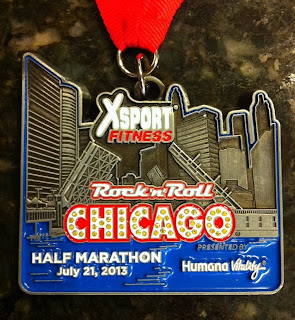 This was my second straight year running the Rock N Roll Chicago Half Marathon, and it is definitely one of my favorite races.  It has a great course through downtown Chicago and neighborhoods, great race support/entertainment, fantastic crowds, and plentiful swag.  The course and the crowds remind me quite a bit of the Chicago Marathon.

The biggest drawback to RnR Chicago is the fact that it always takes place smack dab in the middle of the summer when the high temperatures can be challenging. Thankfully, after a full week of 90-degree temps, we got a pretty decent respite on race day.  This year the temps were in the upper 70s.

After my fueling disaster at the Allstate Chicago 13.1 Marathon last month, I made sure to eat better the day before this race.  What a difference it made!!!  And I had forgotten how much fun it was to carb-load without abandon.  =D 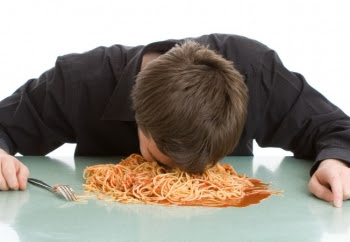 On race day, Marcia was so kind to hook me up with a wristband for the VIP tent at the race.  THANKS AGAIN, Marcia!!!  Tables, chairs, food, drink, private gear check, bathrooms, and a selection of race-day essentials (e.g. sunblock, bugspray, lotion, and Band-Aids, etc.).  I can't think of a better way to start a race. Here's a picture of Marcia and me at our table (I stole this picture from her blog since her picture turned out much better than mine did): 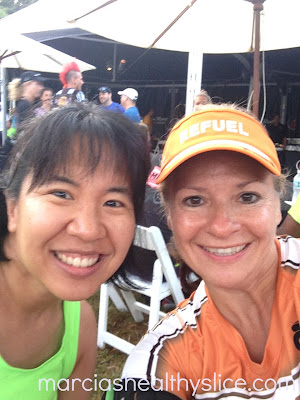 Now onto the race itself.  I stayed at the tent as long as I could before joining my corral, but still ended up having to wait over 20 minutes before starting.  As my corral inched towards the start line, I was already starting to feel the need to use the bathroom again. I considered jumping out of my corral and trying to find another portapotty, but the crowds were so heavy that I decided against it.

About a half mile in, the course crossed a bridge over the Chicago River.  There was a runner standing along the bridge's railing.  Someone threw what looked like a small bag at him.  Unfortunately, the bag slipped through his hands, flew over his shoulder, and plummeted directly into the river below.  WHOOPS.  That's not a good way to start out a race!  I watched as three other runners ran up to him and all four of them peered down at the water, presumably watching the bag float away.  I can only imagine what belongings he must have had in that bag, too. 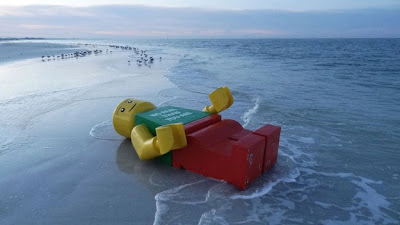 I was needing to go to the bathroom more and more.   Unfortunately, every portapotty I saw had a long line of runners and I didn't want to wait.  However, I was blessed by the fact that my home building was right near the Mile 3 marker!  I decided that worst case scenario, I would make a quick detour at home to use the facilities.

No luck yet with the portapotties.

Home-field advantage, here we go (literally and figuratively)!  I veered off course and headed directly to my building's lobby, where I nearly knocked over the revolving door enroute to the lobby bathroom.  Our doorperson, Stephanie, grinned at me as I blew past and said, "You came in for the good bathroom, eh?"

I felt so much better after using the restroom!  My legs felt like they had huge weights taken off of them.  I tried to get back on course as quickly as I could.  I saw Adam as soon as I hit the street again, which was right at an aid station.  It was there that he took this picture of me: 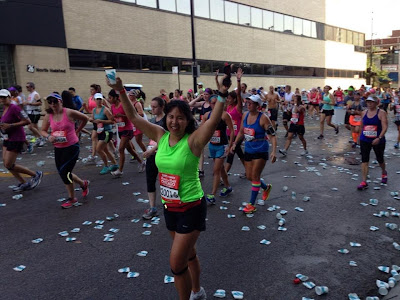 Adam's observation: "Runners are great athletes but not great basketball players.  See all the cups on the ground?  Numerous missed shots at the garbage can from short range."

(I will admit that I usually don't even bother trying to get the cup into the garbage can.)

I saw Erin spectating along the course, holding up this sign: 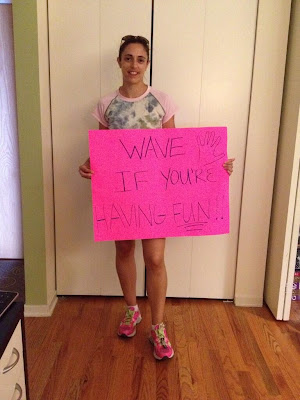 We were running eastbound, directly into the sun, and it was starting to get uncomfortable.  I saw a few aid stations with bags of ice.  Based upon the suggestion of many fellow bloggers, I took a few cubes and dropped them into my sports bra.  The cubes clanked against each other as I ran, making rhythmic clicking noises.  I tried not to laugh.

Believe it or not, those musical ice cubes were still going.

We pass a neighborhood that I used to live in, and there have been some nice improvements to the area since then.  My legs are feeling good and I am enjoying how quickly the time is passing.

We go through the long McCormick Place tunnel right after mile 11.  Normally this tunnel is dark, stuffy, and killer, but to my surprise they have a party set up inside with flashing lights, neon, and dancers.  Awesome!  I don't have a picture of it, but it was kind of like this: 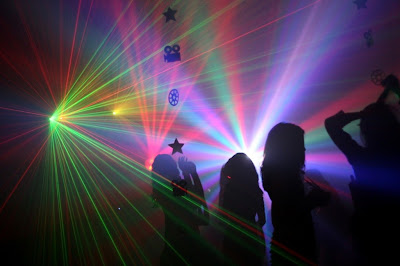 Normally around mile 10 or mile 11 is where I start feeling the fatigue at half marathons. This time I am pleasantly surprised when the fatigue doesn't really hit until about mile 11.5.

Right near the Mile 12 marker, I saw a runner passed out on the street, lying in a pool of blood, surrounded by paramedics.  Yikes.  Based on the recounts from other runners, it sounds like he was already down for quite some time before I saw him. Really scary stuff.  I hope he is okay.

At this point I can see the finish line.  It looks tantalizingly close, much closer than it really is.  I am thinking that I am nearly there, but than I look down at my Garmin and realize that based on my pace I still have a ways to go.  ARGH!!!

My official finishing time: 2:26:32.  Considering this was a summertime race, I had lost some time going to the bathroom, and I felt strong for almost the entire distance, I will take it!

I am buoyed and rejuvenated by how good I felt during this race.  As I mentioned here, motivation has been tough to come by for me this year, so I want to ride this wave of energy as long as I can.  I have a nice 6-week break now before my next race (the Chicago Half Marathon on September 8) and am looking forward to resuming a more consistent training schedule over these next few weeks in preparation.