The ITU World Triathlon Series Grand Finale takes place in Chicago next month! Over 150 of the world's top Olympic-distance triathletes will compete.

We started off with a product demonstration from Jabra. Reps were on hand to show us their Sport Pulse Wireless earbuds, which have a built-in biometric heart-rate monitor. Basically, it tracks your heartrate through your ears, eliminating the need to wear a chest strap. The earbuds also have detailed training app data capabilities to measure distance, elevation, pace, etc. Super cool!

Next, all of the attendees went on a guided run led by Mike Norman, the founder of Chicago Endurance Sports.

Here is a picture of Zenaida, Maggie, Amanda, and me shortly after starting the run.


Mike pointed out various key points along the World Triathlon course such as transition areas and the starting and finishing line. For example, Queen's Landing (the lakefront near Buckingham Fountain) is where the swim kicks off:

Transitions and the finish line are set up right next to Buckingham Fountain:

Here is a snapshot of Amanda, Maggie, Zenaida and me in front of Buckingham fountain, near the same location pictured above:

Mike gave us a quick overview on triathlon transitions. He shared some tips and tricks and demonstrated some of the elites' best practices and ruthless efficiency.

I was blown away by the sophisticated equipment and all the details. For example, Mike showed us helmets with magnetic straps instead of manual clasps. What an ingenious idea!

We then headed back to Fleet Feet's shop. There, Melissa Stockwell, a three-time Paralympic World Champion, spoke to the group.

Melissa's story was very touching. She was a U.S. Army officer who had served a tour of duty in Iraq. She lost her left leg when a roadside bomb exploded as she was leading a convoy in Baghdad.

Melissa talked about the extreme mental and physical challenges she underwent after the explosion. She described how she realized that she was so fortunate because others had injuries much worse than hers, and even though she was missing a leg she still had her life.

After being released from the Army, Melissa set her sights on becoming an Olympic paratriathlete. She represented the United States during the Beijing Olympics and even carried the American flag during the closing ceremonies.
Now Melissa is training hard with the hopes that she can represent the U.S. in the 2016 Rio de Janeiro Olympics.

Here is a picture of Melissa showing us her three prosthetic legs - one for everyday walking, one for running, and one for biking. I was amazed at the scientific and highly sophisticated design features, as well as the cost (the everyday prosthetic costs about $50,000). 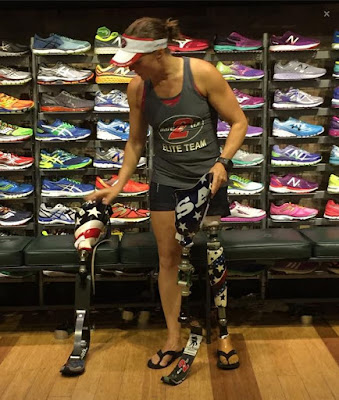 I learned so much about triathlons and para athletics at this event! Additionally, prior to Monday night I had no idea that Chicago was hosting a triathlon event of such magnitude. What an amazing honor!

A few ITU folks mentioned that the triathlon was in need of thousands of volunteers during race week (September 14-19). I have been wanting to do some race volunteering and this sounded like an awesome opportunity! Yesterday, I signed up for two volunteer shifts. (Folks that work two or more shifts get VIP status and extra swag =) ). If anyone wants to join me as a volunteer, here is the link to sign up.

I can't wait to witness a World Triathlon Series event next month in person!
Posted by emmers712 at 5:00 AM