The 2016 Pittsburgh Half Marathon was my 27th half marathon completed! 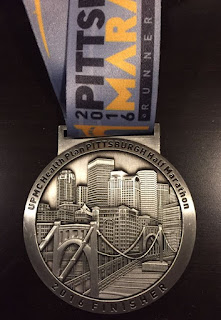 This race ranks high on the list of races I have been happiest to complete due to the amount of work I put in to prepare for it. As I've discussed ad nauseam, this meant a lot of incline training. It also included ample strength work (squats, lunges, et al).

Ready for a ton of pictures???

The entire week leading up to the race included rain in the forecast. Therefore, part of my night-before prep included concocting my second edition of the world-reknown garbage bag dress. Accept no imitations! 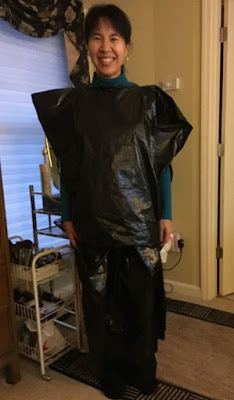 On race morning, our friend Julie had graciously offered to drive us, as well as our friends Laurel and Natalie, to the race. Thank you, Julie!!! Adam and I left for Julie's place at 5:30 AM. I must also note that Adam willingly and cheerfully did this on only 4.5 hours of sleep after staying up late to watch the Penguins' big Game 2 victory over the Capitals. Huge sacrifice on his part!

Going to the race with Julie, Laurel, and Natalie made life SO much easier. Thanks to Laurel's husband, we had keycard access to one of the downtown parking lots. The ladies also knew of a hotel right by the starting corrals. We were able to use indoor restrooms and do all of our final pre-race prep inside. The whole process was a godsend for which I am extremely grateful. The locals always know best!

Here's a pre-race photo:
Afterwards, we split to head to our respective corrals. As I was waiting to start, the sound of Renegade, a song that the Pittsburgh Steelers have adopted as an anthem, was played over the loud speaker. It made me smile.
It began to rain as my corral crept up to the starting line. That didn't dampen the enthusiasm of the crowd, though. Here was my view as I was approaching: 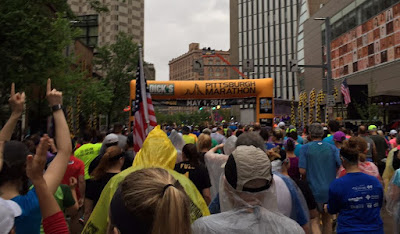 The course was very crowded. Even though I had no time goals for the day, I had told Adam I thought I'd run a 10:30ish pace. Initially I tried to stay true to that.

The course wound through downtown, followed by the Strip District. I was looking all around, observing the scenery and soaking in the atmosphere as best I could. At the same time, I was trying to be careful not to bump into others or trip on anything.

I saw Adam for the first time around the 2.8 mile mark. Our spectator plan included a total of four points, and we had noted he would be on the left side for every single one. I joked with Adam that it reminded me of this Patrick Kane commercial:
Sure enough, as I saw Adam, he yelled, "HOW YOU SCORE FROM THE LEFT SIDE?" It made me burst out laughing.

Since it was raining, I didn't have my phone out. However, when we approached the first of five bridge crossings, I had to take a picture:

In the past, I had been bothered by the inclines on the bridges, but today I didn't notice. YAY! I hoped this would continue on all of the other bridges, too.

The course ran briefly through the North Side before looping right back on the 9th Street Bridge. I saw Adam again around the 4.2 mile point. We then ran briefly along Fort Duquesne Blvd, which was especially mobbed with spectators. It was very energizing!

I grinned at some of the signs I saw. One sign I saw frequently had this local expression on it:
Then we turned around again and crossed the Sandusky Bridge back to the North Side. I still had no issue with the bridge inclines, but there was a long, gradual hill around the Mile 5 marker that made me take notice.

The next stretch of the course took me to some areas of Pittsburgh I had never seen before. We passed by the National Aviary, which was in a beautiful park:
Then it was on to the West End Bridge, which was the fourth bridge crossing. The rain had stopped so I decided it was time to whip out my phone and take some pictures. This was the view:
Next, the course wound through the West End. This seemed like a more residential area and there were again a lot of spectators. One guy had a giant cooler and was busily handing out full cans of beer! I giggled at some of the spectator signs. One said, "I thought this was the pierogi race!" and it reminded me how the Pirates have pierogi races during their home games.
The course turned onto Carson Street, which runs along the Monongahela River. This stretch afforded more beautiful views of the Pittsburgh skyline.

We ran by the base of the Duquesne Incline (I've never ridden any of the inclines in Pittsburgh): 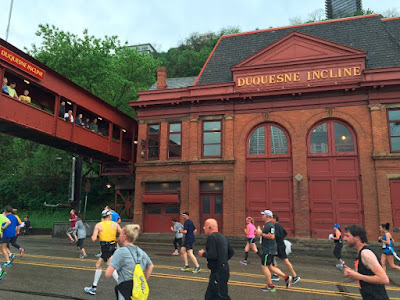 I saw Adam again around Mile 9, which was in Station Square. He got this picture of me in the crowd (I'm in the turquoise with my arm raised): 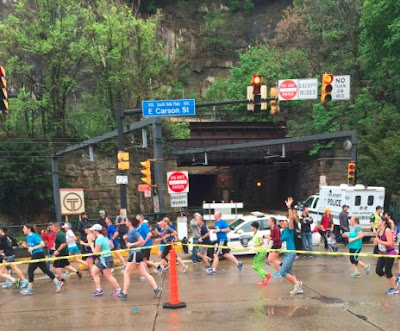 Around Mile 10, we entered the South Side where we were greeted by a sign welcoming us to "the flattest mile on the course." Right on! In retrospect, I should have taken a selfie with that sign. =D I enjoyed the flatness and took my time walking through one of the aid stations. I wanted to gather some mental and physical strength for the big hills that I knew were approaching after Mile 11 (which I discussed at length here).

We crossed the Birmingham Bridge, which was the fifth and final bridge. The Mile 11 marker was on the bridge. Spectators shouted all kinds of encouragement to us about the final stretch. Several runners around me made comments about how the moment of truth was coming. I took some deep breaths and braced myself.

After the bridge, we turned onto the Blvd of Allies. I expected to see a venerable mountain ahead of me, something like this:
The actual hill was NOTHING like what I had envisioned. Jessie mentioned the elevation chart was a bit dramatic, and she was absolutely right! In all honesty, it looked no tougher than any of the other hills we'd already passed. I wondered if it was perhaps just the prelude to something else, but it wasn't. I was so relieved! It felt like an enormous weight had been lifted from my shoulders.

Here are more of the stunning views from the hills near Duquesne University: 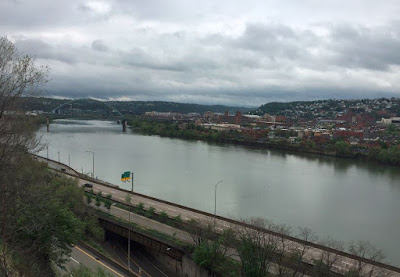 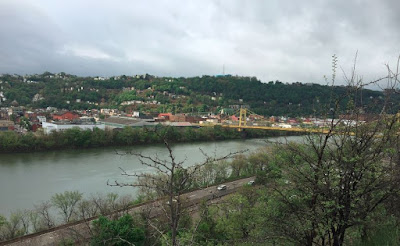 I couldn't believe it when I hit the Mile 12 marker. REALLY? Was I truly that close to the finish? I looked down at my Garmin to be certain, and sure enough my Garmin agreed. WOW! I had held myself back so much in fear of that final stretch, but in retrospect I could have pushed much harder.

Jessie had mentioned there would be a Duquesne University sign to mark the end of the final hill. When it came into view, I almost pulled off to the side to do a dance of joy. Since Adam and I had talked at length about this point being the final challenge on the course, I took this picture and texted it to him: 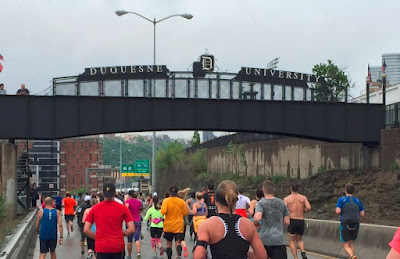 Then - it was time for the final, glorious, triumphant downhill stretch to the finish. I felt very strong, I was brimming with elation, and I couldn't stop smiling. Adam got this snapshot of me as I was approaching the finish line:

My final time was 2:20:34 - and it could have been much better had I run more aggressively!
I am THRILLED at how much the hill-training ended up paying off for me! I actually had a tougher time with the hills at Rock N Roll DC six weeks earlier than I did in Pittsburgh. Just goes to demonstrate how training efforts manifest themselves more and more over time, yes?

All in all - I loved this race!!! The course was a stunning tour of the city, the event was very well-organized, and the spectators and volunteers were phenomenal. It meant so much to me to be able to run a hilly course with relative comfort. It also meant so much for me to get to know more about Adam's hometown the way only a runner can during a race.
Thank you to everyone for all of your support, and thank you to Pittsburgh for such an amazing experience! I will most definitely be back. =)

My next race: the Cinco de Miler on May 7