When Adam and I traveled between Budapest and Prague, we elected to take an overnight train. I had mentioned here that it was, in short, a harrowing experience. After we "reminisced" about the ride several times, Adam graciously agreed to document the adventure. Here is his guest post about our experience. [Cue the Midnight Train to Georgia song, replacing "Georgia" with "Prague."] Please enjoy!

When Emily and I planned this most recent European excursion, we discovered a fearsome logistical challenge. Our great airfare itinerary did not geographically coincide with the three cities we wanted to visit in the region. Simply put, any combination of Budapest, Prague, and Vienna was going to involve at least one extra-long and circuitous train excursion.

There are worse things in life than a long train ride. But we had a limited time window on this trip and 8 hours in transit would clobber a day of touring. It seemed our options were limited, which meant, to quote Blackhawks announcer Pat Foley, "Something’s gotta give!"

And then...through the miracle of internet research plus friends with travel experience, we found the solution to satisfy all concerns. Ladies and gentlemen I give you…the overnight train.

To our delight, we discovered a train that leaves Budapest at 8:30pm and slowly winds its way to Prague, arriving at 6:43 the next morning. 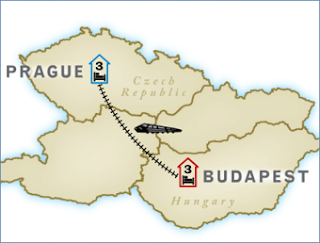 For a nominal fee, we could even purchase a “sleeper car” which would provide privacy and a bed. IN THEORY, it was the perfect plan, a chance to have our cake and eat it too. And as an added bonus, we would save a hotel night.

[Note added by Emily: I had visions of glamorous overnight Eurorail trains like this:] 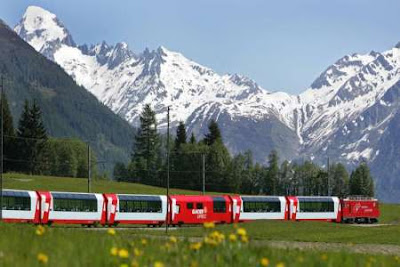 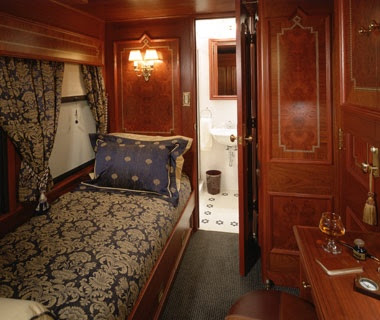 What could possibly go wrong?

Simply put…THIS:
Now, reality can be a function of expectations. Honestly, this level of accommodation was about what I expected. As you can see, Emily developed somewhat higher expectations based on her research and perhaps the occasional old movie; both of which make evening train travel seem quite glamorous. In the end, we were both simply tired and uncomfortable… Emily was just proportionately more disappointed by it.

Let’s start with the obvious. There are six beds in this cabin; a room that is notably smaller than the closet in our bedroom. That creates the potential for very cramped conditions which somewhat frighteningly, was THE LEAST of our concerns. The greater fear was that Sasquatch from the Jack Links jerky commercials would show up as our roommate, and that Sasquatch would be messing with us (and our luggage).


Tangentially related, we actually had beef jerky with us. For any older readers, you might remember the famous Eddie Murphy beef jerky on the train scene from Trading Places in 1983.

And yes, I found it necessary to yell "Beef jerky time!" just after the train departed.

It cost just 20 Euros for Emily and I to buy tickets in the sleeper cabin. I admit I was prepared to drop 40 more for “exclusive rights” to the cabin. To his immense credit, the conductor told me he could sell that but I PROBABLY would not need it. So kudos to him for not ripping us off.

Once we got settled in it was time to check out the bathroom. Proper decorum and good taste precludes me describing this in detail. I will simply say that this facility made me pine for the relative beauty and serenity of an airplane bathroom…and/or some hand soap.

[Note added by Emily - I found this gratuitous and very comparable bathroom snapshot:]
Thankfully Emily brought hand sanitizer. I’ve smelled worse places than the train bathroom, I just do not remember where or when.

And to quote Forrest Gump, "That's all I've gotta say about that."

After we settled in, we realized that the 2nd level mattresses could be dropped down to create a couch. This was a great feature which Emily and I happily made use of before bedtime.
Sadly and a tad embarrassingly, we could not figure out how to put it back. Oh, but had I been an engineering major in college. After ten minutes where two educated adults futilely battled to bring a mattress back to 90 degrees, we gave up and decided Emily would bunk above me.

We were warned in no uncertain terms to lock the door of our room. Beyond the obviously disconcerting nature of said warning were further logistical troubles. Again, you had to climb to the top of the bunks (where there was no ladder) to reach a small, overhead lock. (Perhaps coincidentally, it was located right next to the emergency brake, too.) This pretty much eliminated even the slightest notion of a middle-of-the-night bathroom run. Of course, given my description of the bathroom…well, you get it.

Sleep did not come easy. The “bed” was half the width of a college dorm mattress and barely more cushioned than the floor. On top of which, you are sleeping sideways compared to the train motion, the tracks are very loud, the train jumps a lot, and stops are hard. But near midnight…sleep slowly started to wash over both of us.

The train suddenly came to a complete stop. The engines shut down, and there was a pounding of a night stick on our door with a shout of “POLICE! PASSPORT CONTROL!”
Given that we were both half asleep (or maybe half awake), some amount of natural confusion reigned. Normally passport checks by the Czech police would be a reasonable request to execute except that:
This lead to some frantic moments, especially when we could only crack the door open, but ultimately we complied. Of course it took more than a few minutes afterwards to settle down and return to a resting state.

I'm pleased to report that we both logged about 3 to 5 hours of constricted sleep though it was frequently interrupted. At one point in the middle of the night, the train stopped at a seemingly deserted station and a series of repeating warning announcements were loudly made in muffled German. I was hoping they were announcing our transfer to a complimentary five-star hotel for the rest of the night. Emily, who took German in high school, found them a bit more daunting.

[Note added by Emily - the scenery outside looked something like this, which was unsettling:]
We woke up at 6:30am and arrived punctually in Prague. At the risk of sharing far too much information I offer this; when humans like me who are on the plus side of 40 awake, our first morning priority tends to be use of the bathroom. In this case, my priorities shifted to trying very hard to avoid the bathroom, until we could get in the train station and pay for the privilege.

and with that... welcome to Prague! 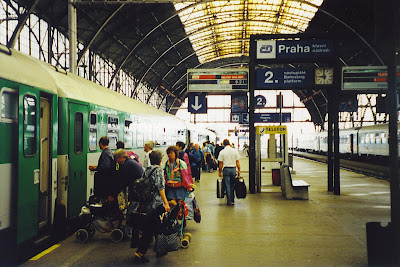 I’ve been asked many times how I would describe our train adventure and I will simply say this: It was an experience. It’s something we will always be able to say we did… once.

--
Thank you to Adam for sharing his thoughts!!!!

Later this week I will pick back up to talk about Vienna, the final stop of our trip. Although, it will be really hard for me to follow Adam's recap, eh??????
Posted by emmers712 at 1:33 PM