Continuing from my Budapest travel recap.

The next stop on the itinerary was Prague. Adam and I took an overnight train out of Budapest which arrived in Prague around 6:45 AM the next morning. (The overnight train is a whole other story. In short, it was a harrowing experience.)

After arrival, we had a bit of a rough start to our Prague visit. The weather was unexpectedly cold. We hadn't slept much. The place at which we were staying wouldn't be available until mid-afternoon, and in the meantime we couldn't shower or change clothes. Needless to say, we weren't feeling 100%. But we stored our luggage at the reception desk and set out to begin exploring.

Rough start aside, I found Prague to be a stunningly beautiful city. The castles, churches, and architecture were spellbinding. I felt like I was in a fairy tale. Let the onslaught of pictures commence:
Clearly the world has discovered Prague's beauty because it was crawling with tourists. In some streets, there were so many tour groups jamming the paths that you could barely walk. Adam visited Prague 11 years ago, and he says back then it was much quieter.

That first morning in my sleep-deprived, unshowered state, I didn't have a lot of patience for the throngs of tourists. But later, after I was able to get some sleep and clean up, I was in my element soaking in the city's atmosphere.

Here are the highlights of what we saw and experienced: 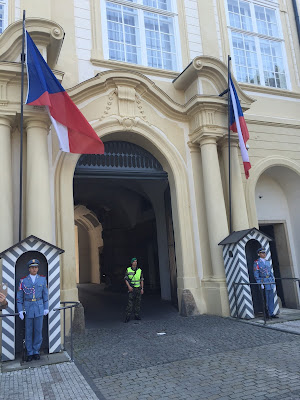 St. Vitus Cathedral
The outside of the cathedral: 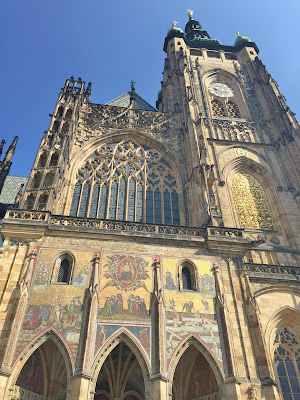 The view after walking through the front entrance: 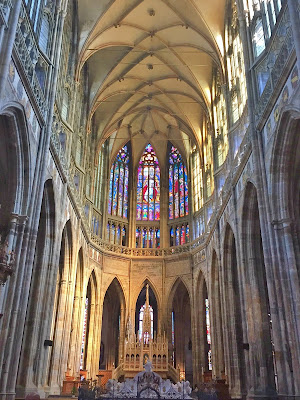 One of the religious shrines (very much along the lines of what you'd expect to see at a castle, yes?): 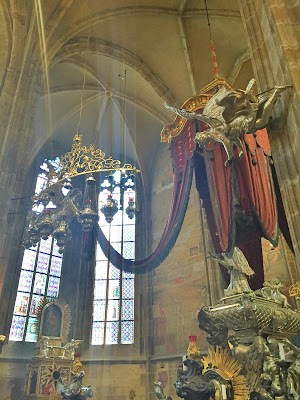 One of the stained-glass windows, with a fresco painting on one side wall: 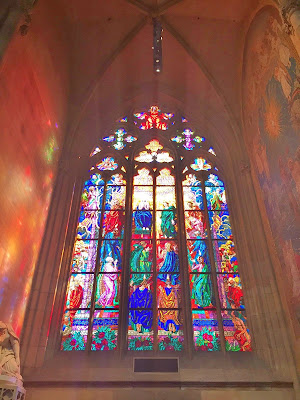 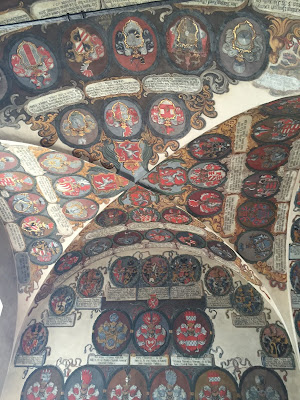 View from one of the palace's overlooks: 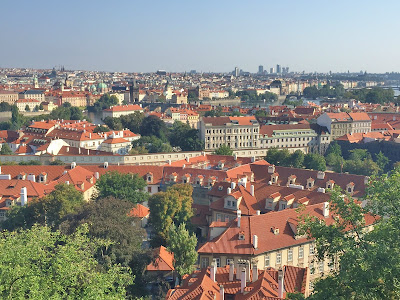 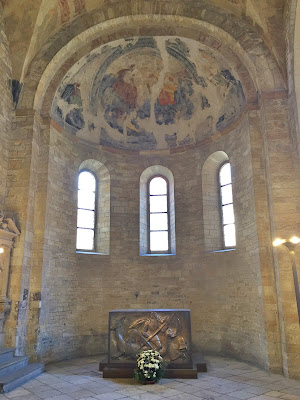 Golden Lane
This area housed a very cool display of armor and armory: 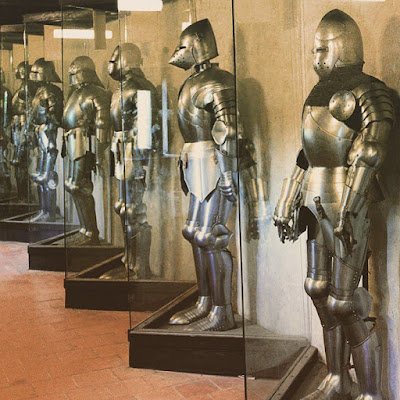 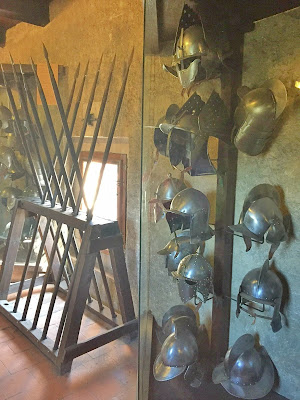 Daliborka Tower
This was a medieval prison. Here, we got to see a wide display of medieval torture devices from the dungeon (literally). The mere sight of these devices gave me the heebie-jeebies: 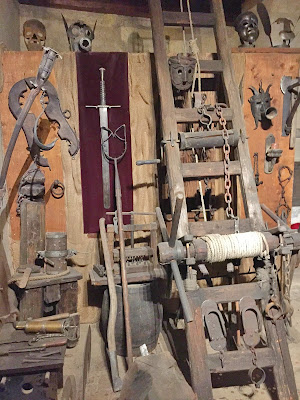 Adam got a kick out of this chair: 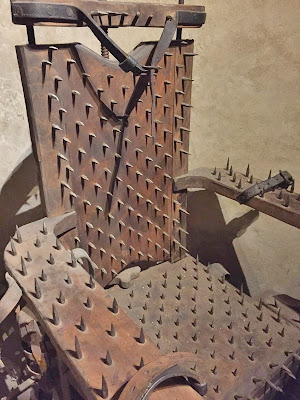 I am suddenly very, VERY grateful to live in the present-day era.

OK! Now moving on from the Prague Castle...

John Lennon Wall
The John Lennon Wall is a symbol of freedom and rebellion against the communist regime in the 1980's. It's got some interesting history.

The wall was tricky to find, but worth the search, in my opinion.
Side note: There was a number of, uh, obscenities painted on the wall. For purposes of being politically correct, I did my best to pick a photo spot that didn't include anything unsavory - but it wasn't easy!

Astronomical Clock
An ENORMOUS crowd of folks gathered in Old Town Square to watch this clock change every hour, during which miniature figures came out of the little doors. The viewers were similar to a concert gathering. 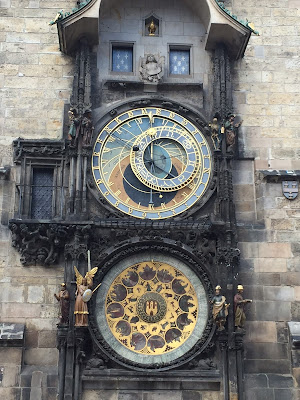 Food
Adam and I enjoyed getting some local eats from an outdoor market near where we were staying: 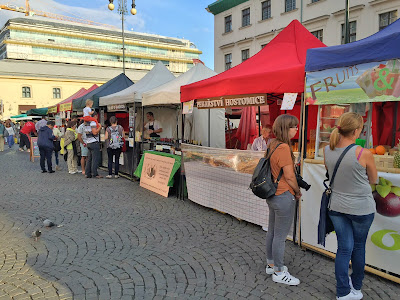 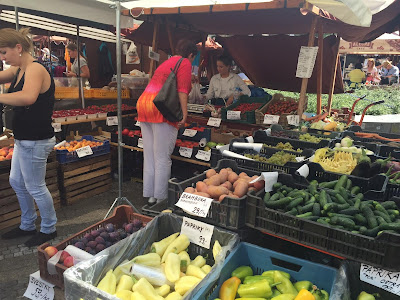 Similar to Budapest, the outdoor dining scene was very prevalent in Prague. Everywhere we went, there were restaurants loaded with al fresco seating.

For dinner one night, we stumbled upon a local restaurant called U Zlatých nůžek near the John Lennon Wall. It had fantastic Czech food.
Here's what I had:

The next night, we popped into dinner at a restaurant called Kings Court, which was also excellent. Instead of paper menus, they handed out iPads with the menus on them! Very progressive. 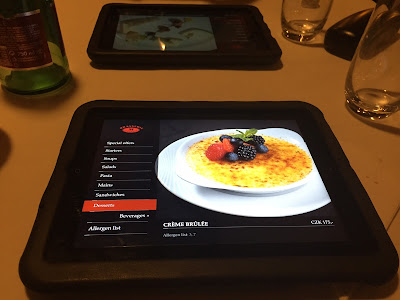 This was the view of my dinner companion, along with the restaurant's house-made lemonade: 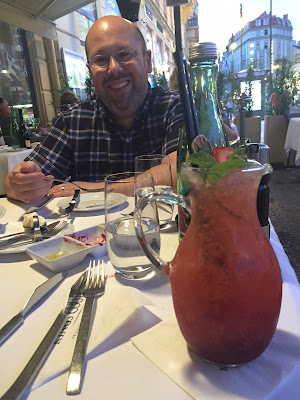 Old-New Synagogue
We made a quick stop here after seeing some street signs pointing towards its direction. I later learned that this is Europe's oldest active synagogue: 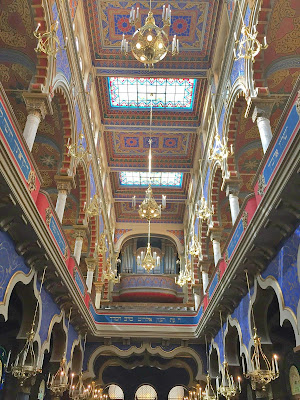 Everything else
To continue my pattern from my Budapest recap, here is a shot from one of Prague's subway trains (their public transit system is also fantastic): 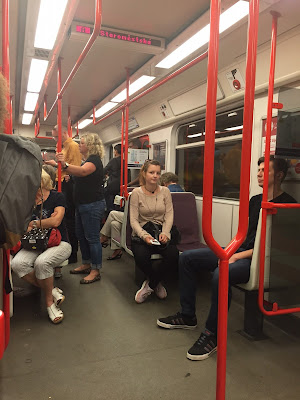 and here is Prague's version of the decorative manhole covers: 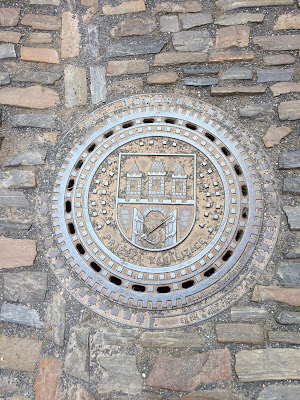 Quite another onslaught of pictures, eh? Once again, thank you for sticking with me if you made it this far!

In summary - I was completely beguiled by Prague. I had heard amazing reviews about it from so many people, and even with high expectations it still captivated me. What an incredible city!

Next on the vacation itinerary: Three days in Vienna

--
I am inaugurally linking up with Lauren, Van, Isabel and Marcella for Wanderful Wednesday; and I will be linking up with Chris and Heather; Lauren; Ashley; Amanda and Brian; and Carolann and Macrae for Weekend Wanderlust.