Vacation Planning (aka Brain Cramp #1)
Excruciatingly contemplative planning mode is currently in effect to select a weeklong fall or winter vacation destination. The contenders include either the Outer Banks or Hilton Head in the fall, or Cabo in the winter.  I've been researching all three and there are plusses and minuses to each, but at this very moment Cabo is the front-runner destination.

Vacations are serious business for me.  Therefore, I make travel planning way, way, way more complicated than it should be.  I do so much research and consider so many factors that I sometimes lie awake at night with my mind racing. 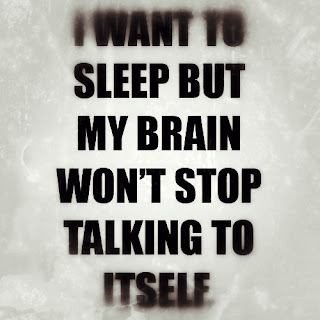 I know it's counterintuitive to get stressed about vacation planning.  However, since there are only finite amounts of PTO per year, I believe each vacation needs to be maximized to the fullest.  I also believe that the more advance planning you do, the more effectively you can utilize your time while on vacation!

On a side note, I've mentioned on multiple occasion that I would like to be either Italian or Hawaiian since I adore both cultures so much.  However, I've started thinking that it would be nice to be Australian and partake in a walkabout.  Six months of soul-searching travel?  WHERE DO I SIGN UP?!?!?

Speaking of Mexican Travels...
I once took the border shuttle from San Ysidro (close to San Diego) to Tijuana.  ﻿
At the time, I was looking forward to the opportunity to get a Mexican stamp in my passport.  Unfortunately, the border shuttle drove directly through the "Nothing to Declare" express lane without passing Go and without collecting $200.  No customs or immigration officers or anything = no passport stamp!  (I've since made up for it by traveling to Mexico via more traditional means.)

As you might expect from me, I am tracking how many of the Mexican states I've been to.  Seven so far - Baja California, Sonora, Sinaloa, Nayarit, Jalisco, Yucatan, and Quintana Roo (all the touristy ones).  Hoping to go to Guerrero and Veracruz in the near future. 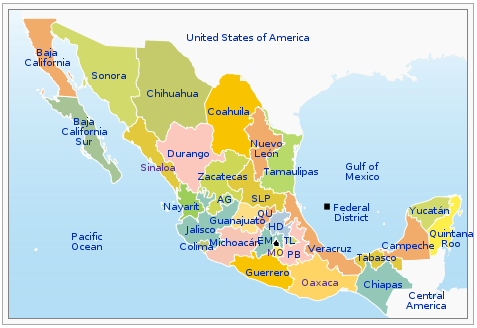 My Tijuana sojourn has been the extent of my travels to the Baja Peninsula so far, so in visiting Cabo I'm really excited about the opportunity to add Baja California Sur to my list of Mexican states visited!  I will obviously be adding it to my list of places where I've gone running, too.  =)

Disney Wine and Dine Half Marathon (aka Brain Cramp #2)
I saw that registration opens up on March 13 and I know it fills up quickly.  As much as I would really love to do this race, registration will be expensive.  They haven't announced the amount yet, but based on other Disney races I imagine it'll be at least $150, maybe more.  Obviously there is also the cost of airfare, hotel, transit, taking a day or two off from work, etc.

I am really starting to consider whether or not the cost is worth it.  Do I splurge, knowing that you have to live life and that once in awhile it's nice to do something that you'll know you'll enjoy?  Or do I take the perspective of being practical and realize that you have to draw the line somewhere on how much to spend for enjoyment without going overboard?  Not to mention the risk of running a half marathon a month after running the Chicago Marathon - who knows where my health and mentality will be in at that point.

I haven't gotten to the point where I lie awake thinking about it yet, but never fear - the closer March 13 gets, the higher the probability that I will!
Balaclava Update (aka Brain Cramp #3)
The temps this past weekend were in the teens, so I took my balaclava out for its inaugural run on Sunday morning.  If I do say so myself, I look pretty scary when I'm simultaneously wearing the balaclava and my bug-eye sunglasses.  I'll post a picture later (the balaclava is in the wash right now).
The balaclava was helpful during the first ten minutes while I was getting warmed up.  Beyond that, I did start feeling claustrophobic.  I ended up folding it down over my chin so that my nose and mouth were open.  It was better than a hat alone, but I definitely can't wear it over my face for an extended period of time.
I'm considering getting it tailored to create an additional opening for my mouth and nose.  However, I am not sure how it would go over with the alterations manager at the neighborhood drycleaner.
Note also that I purposely wore non-threatening colors when I wore the balaclava.  I didn't want anyone to drive by me and call the cops or anything. 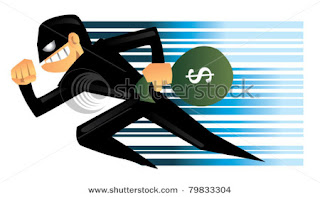 I actually never dress head to toe in black but I do have black running tights, a black running jacket, and black gloves. That day I did wear the black tights but also consciously wore a turquoise jacket, red vest, and red gloves.  In the movies and on TV the thieves and robbers never wear red and turquoise, right?
Posted by emmers712 at 4:53 PM